Juanita: Hi there Sam We spoke…
Andrew: David, many thanks for this…
David: And, for further reading, I…
David: There’s a substance to this…
Arthur Davis: That, I think, is the…
END_OF_DOCUMENT_TOKEN_TO_BE_REPLACED

Conversation with Mike Bird about In the Form of a God (0 comments)
Answering Mike Bird about the referent of "all things" in 1 Corinthians 8:6 (0 comments)
Interview: The Preexistence of Christ and Narrative Historical Theology (1 comment)
How we got from kingdom to Trinity: Constantine and pagan monotheism (2 comments)
END_OF_DOCUMENT_TOKEN_TO_BE_REPLACED

Alexandria and Antioch: a revised tale of two cities

I make the point frequently that there are two basic approaches to the interpretation of the Bible operative in the church today, a theologically determined method and a historically determined method. The church tends to regard the historical method as detrimental to orthodox belief and the theological method as supportive. My argument is, to the contrary, that “history”, understood principally as the story that the historical community told about itself and its experience of God, gives us a much more credible and robust account of Christian origins—and of the purpose of the church—than any method that, knowingly or otherwise, obliges scripture to conform to the theological presuppositions of the church. 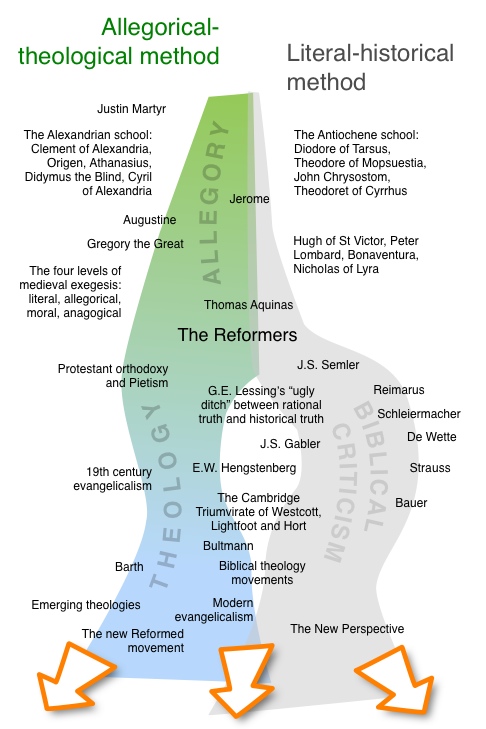 The chart presents a consistent division in biblical interpretation between an allegorical-theological method and a literal-historical method. The dominant tradition throughout the history of the church has been the allegorical-theological method. Historical-criticism began in earnest in the 18th century but is shown to have had antecedents in a small group of medieval interpreters and an Antiochene school of patristic theologians, among them Diodore of Tarsus, Theodore of Mopsuestia, John Chrysostom, and Theodoret of Cyrrhus. This is marked graphically as a minority tradition.

I have not read these authors. The model was derived from standard histories of biblical interpretation, which typically assume a sharp contrast between the Antiochene method and the method of the Alexandrian fathers, who leaned much more towards the exposition of an overburden of symbolic meaning not immediately evident at the surface level of the text.

My chart has been challenged by Michael on the grounds that recent patristic research has largely discredited the Alexandria-Antioch paradigm. He’s right about the change of view among scholars, but I’m not sure that the schematisation needs to be abandoned. My response is based on a reading of Frances Young’s chapter “The rhetorical schools and their influence on patristic exegesis” in Rowan Williams (ed.), The Making of Orthodoxy: Essays in honour of Henry Chadwick (182-199), Donald Fairburn’s article “Patristic Exegesis and Theology: The Cart and the Horse” (WJT 69, 2007, 1-19), and what seems to be an unpublished article by Darren Slade called “Patristic Exegesis: The Myth of the Alexandrian-Antiochene Schools of Interpretation”. I am not a patristics scholar, and readers are invited to point out the shortcomings of my limited research.

The revisionist argument in general terms is 1) that there are significant anomalies in the paradigm: sometimes the Antiochenes interpret allegorically while the Alexandrians interpret literally; 2) that the differences between the two schools are attributable not to exegetical method but to more fundamental theological or cultural divergences; and 3) that there are significant differences between fathers from the same school. Donald Fairburn summarises the argument:

At this point, it should be clear that over the last fifty years, patristics scholars have been repeatedly emphasizing that the old distinction between Antiochene and Alexandrian exegetical methods is inaccurate and misleading. Externally, the “schools” are not as distinct as they have been made out to be: the Alexandrians do not “allegorize away” the OT as much as has been thought, and the Antiochenes are not necessarily more literal in their methods than the Alexandrians. Internally, the two “schools” are not as consistent as the typical view makes them out to be: there are significant differences in interpretation from one person to the next within the same “school.” And when the interpretation of the two “schools” does seem to fit the model, recent scholarship indicates that exegetical method is not what produces the interpretation in question. (9-10)

These observations have led patristic scholars to construct a new account of the relation between the two schools, somewhat along the following lines:

This rethinking of the relation between Alexandria and Antioch, however, does not appear to have completely erased the methodological distinction. Fairburn writes: “There is no question that the so-called Alexandrians offered figurative interpretations of many passages in the OT that the so-called Antiochenes took more literally” (3). What he objects to is the assumption that this divergence was the product of “thoroughly distinct exegetical methods” (3).

That seems to me entirely reasonable: we should not be surprised that in the polemical hothouse of the patristic period exegetical methods were distorted by theological agendas. The standard hermeneutical model has to be treated as an abstraction; it highlights the residual or marginal differences for the sake of theoretical clarity. The patristic debate occurred much further along the spectrum towards a hypothetical allegorising or theologising extreme than it does today. This reflects the strength of the modern historical consciousness and, in particular, the general consensus among interpreters that the Jewishness of the New Testament has to be taken into account.

The chart should, therefore, be skewed so as not to suggest that there is a direct line of inheritance from Alexandria to modern Theological Interpretation of Scripture or from Antioch to my narrative-historical method and other predominantly historical approaches. But I’m not sure that it has been rendered altogether invalid by the revisionist argument, and in some ways the rethinking may even help to clarify the distinctive contribution of the narrative-historical method.

Even if it is fair to say that the “difference between the two traditions resulted from different ways of refuting the theological challenge of Arianism”, as Fairburn argues, reporting Greer, we are still left with the fact that the Antiochenes developed a narrative model for the relationship between the Old Testament and the New Testament, whereas the Alexandrians concocted symbolic or allegorical prefigurative connections. I may have my own intellectual or missional reasons for promoting the historical interpretation of scripture, but that in itself does not invalidate the method.

Fairburn says that evangelical interpreters must accept that “theology always influences exegesis”. No doubt, but I would argue that the task of historical interpretation, at least in principle, is to ask how the first century theologies of second temple Judaism and to a lesser extent of Greek-Roman paganism shaped the thought of the New Testament rather than the theologies of later periods.

Young attributes the differences in exegetical method to the influence of the Greco-Roman schools, but she still thinks that the Alexandrians “adopted the allegorical techniques of the philosophical schools”, whereas the “Antiochene reaction was the protest of rhetoric against such a way of handling texts” (188). She argues that the theōria employed by Theodoret was on the whole “far removed from the kind of thing Alexandrian allegory produced” (192). The Antiochenes may not have been doing historical-critical exegesis, but it appears from Young’s comments that the rhetorical method led them to pay much greater attention to what the text was actually saying. So whereas Origen blatantly allegorised Matthew’s story of the feeding of the five thousand, Chrysostom “turns the story into proofs of dogma and moral lessons” (193). He still misses the historical point, but at least the lessons drawn derive from the actual narrative.

In fact, “narrative” becomes a critical category for understanding the debate. Young’s treatment of the reaction of Eustathius of Antioch to Origen’s exegesis of the Witch of Endor story has been put forward as evidence that the standard model does not do justice to the evidence: “Eustathius objects to Origen’s verbal or lexical approach to the text, without paying regard to the subject-matter. Origen is in this case too literal !” (193). This seems to me a somewhat misleading analysis: Eustathius does not spiritualise or allegorise the story in order to remove the theological problem. But Young goes on to make a telling comment: “Eustathius is objecting to methods which ignore the sequence of the story, the intention of the story-writer and the coherence of the narrative with the rest of scripture” (194).

All through the passage, she notes, Eustathius is looking for “the actual historia of the gramma” (195). This is not “history” in the modern sense, though she assumes that Eustathius imagined a correlation between the text and actual events. The historia is something more like the “narrative logic of the text—making sense of the whole sequence of events described”.

To my mind, this is a pretty good account of the assumptions underlying the narrative-historical method. The narrative-historical method is not historical-criticism. It makes use of historical-criticism, but the aim is to reconstruct the narrative as it was understood according to the perspective of the original community. It is exactly a search for the “narrative logic of the text” in its relation both to the rest of scripture and to the world in which the story was being told.

In that regard at least, I suggest that the standard Alexandria-Antioch paradigm works rather well for me.

Conversation with Mike Bird about In the Form of a God
Answering Mike Bird about the referent of "all things" in 1 Corinthians 8:6
Interview: The Preexistence of Christ and Narrative Historical Theology
How we got from kingdom to Trinity: Constantine and pagan monotheism
Jesus and Paul, works and faith
Some hazardous thoughts on the Trinity for a new year and a new era
Was it Roman custom for people to return to their home town for a census?
A Hindu asks a very good question about the death of Jesus and the salvation of Gentiles
END_OF_DOCUMENT_TOKEN_TO_BE_REPLACED