Andrew: Good reading list, by the…
Kevin Holtsberry: Thanks, Andrew. That helps…
Andrew: Should we not remain…
Andrew: Thanks for this Kevin…
Kent : Andrew, interesting, as…
END_OF_DOCUMENT_TOKEN_TO_BE_REPLACED

What is the essence of Christianity? (6 comments)
How does the New Testament predict the future? (0 comments)
Who will be taken? Who will be left behind? Darn it, we’re all too late anyway! (2 comments)
Resurrection in the Old Testament: literal or metaphorical? (0 comments)
END_OF_DOCUMENT_TOKEN_TO_BE_REPLACED 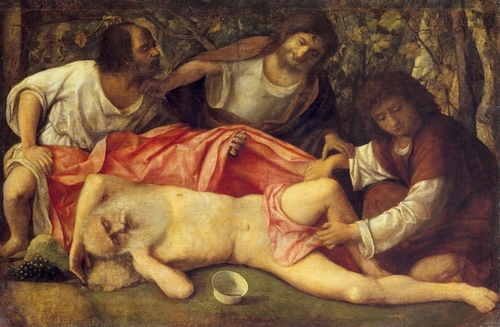 I’ve been reflecting on the flood story this week in preparation for a sermon on Noah as a risk-taker. This is not the content of the sermon, just some notes on the background narrative of Genesis 1-11.

Theological readings of the Bible tend to isolate Genesis 1-3 as a foundational account of creation and fall, culminating in the need for an “offspring” of the woman who will bruise his head, which supposedly justifies the jump ahead to Jesus as the saviour of humanity. Both assumptions are misleading.

First, although messianic interpretations of Genesis 3:15 are found as early as the Palestinian Targums (3rd c. BC), the text only says that there will be hostility between the descendants of the serpent and the descendants of the woman. Leave it at that. The “solution” to the failure of humanity that Genesis provides is not Jesus but Abraham, who is neither saved nor a saviour but the beginning of a new creation people confined to the land, through whose presence the surrounding nations will be blessed.

Secondly, and more importantly, there is evident narrative continuity between the events in the garden and what happens next. Chapter 5 gives us the “book of the generations of Adam”. It is reiterated in verses 1-2 that God created man as male and female in his own likeness. No reference is made to the expulsion from the garden; rather Adam is simply the first in a line of descendants that will lead to Noah, and then to Abraham after the flood (Gen. 10). This is all one story. So the narrow emphasis on the original sin of Adam and Eve that characterises much modern theology misses the broader social-political reach of these chapters—and the fact that the “solution”, when it comes in chapter 12, also has social-political dimensions.

This Noah is known only for having produced from the cursed ground something that would bring a measure of relief from the hard toil of agriculture—namely, wine.

The story of Cain and Abel is a retelling of the Eden story. God cannot find Abel. He asks Cain, “What have you done?” Cain is cursed from the ground which has received his brother’s blood. When he works the ground (ʾadamah), it will no longer yield its strength. He is exiled from that place to become a “fugitive and a wanderer on the earth” (Gen. 4:14). No doubt the emphasis on expulsion, exile and wandering foreshadows the historical experience of biblical Israel.

Cain’s crime is repeated by Lamech and the consequences magnified: “I have killed a man for wounding me, a young man for striking me. If Cain’s revenge is sevenfold, then Lamech’s is seventy-sevenfold” (Gen. 4:23–24).

When people begin to “multiply on the face of the land”, in accordance with the creation mandate, the sort of wickedness exemplified by Cain and Lamech becomes endemic; the earth is corrupted and filled with violence. So God resolves to make an end to all flesh (Gen. 6:1-7, 11-12).

Since the Sumerian flood myths preserved in the Gilgamesh and Atrahasis epics predated the biblical account, the version in Genesis has to be read as an attempt to rework this prominent datum of prehistory according to Jewish-creational presuppositions. It was a deliberate act of cultural appropriation, plagiarism in the name of the living God, a polemic against the bad tempered, small-minded, unreliable and vindictive gods of the Babylonians. The story is not revelation, it is rewriting.

Specifically, the “myth” of a great flood, whatever memories of actual ancient events it may have preserved, was used to give expression to the affront that human violence and injustice were to the good creator God. For the detailed similarities between the biblical and Babylonian see Peter Enns’ concise article on the BioLogos site.

Noah has found favour in God’s eyes because he is a “righteous man, blameless in his generation”; he walks with God. But he says nothing throughout the long narrative, not until we get to the sordid incident when he gets drunk and his “nakedness” is seen by his youngest son, when he curses Ham’s descendants (Gen. 9:20-27). His function is to carry out the Lord’s commands, which he does with robotic efficiency (Gen. 6:22; 7:5, 16). He is a barely human cipher in this powerful story of the rebooting of creation.

When Noah and his family leave the ark, they receive the same blessing and mandate that were given to humanity in the beginning: ‘And God blessed Noah and his sons and said to them, “Be fruitful and multiply and fill the earth”’ (Gen. 9:1). God remains committed to the creation ideal.

The prohibition against eating flesh with the lifeblood in it is a sign that from now on God will “require a reckoning for the life of a man”.

Whoever sheds the blood of man, by man shall his blood be shed, for God made man in his own image. (Gen. 9:6)

God will not again destroy the earth in response to the indiscriminate, unaccountable violence of humanity, but instead he institutes the ancient lex talionis as a covenant with all flesh, as a way of impressing upon people the fundamental value of human life.

But, significantly, in the genealogy of Genesis 5 we are told that Lamech fathered a son and ‘called his name Noah, saying, “Out of the ground (ʾadamah) that the LORD has cursed, this one shall bring us relief from our work and from the painful toil of our hands”’ (Gen. 5:29). Oddly, there is no reference here to the flood and the building of the ark. This Noah is known only for having produced from the cursed ground something that would bring a measure of relief from the hard toil of agriculture—namely, wine.

The descendants of Noah multiply and start to fill the earth, but some of those migrating in the east settle in the land of Shinar and build a “city and a tower with its top in the heavens”. The city comes to be called Babel; it is proto-Babylon, the beginning of the empires that will overshadow the history of Israel, right through to the New Testament.

Abraham is called out of this oppressive shadow to be a new creation people, whom God will bless, who will be fruitful and multiply in the land that he will give them (Gen. 12:2; 17:2; 22:17; 26:4). God remains committed to the creation ideal—only in microcosm. The biblical story culminates in the overthrow of “Babylon the great”, which is pagan Rome, and the establishment of the rule of Christ over the nations of the empire.

In the post-Christendom era, when the eschatological significance of Christ’s victory over pagan empire and his confession as Lord by the nations is lost to us, the story of the flood helps us to keep in mind larger global themes of injustice and violence, the fragility of the created order, and the abiding reality of the creator.

Nice sermon thoughts! Will this be for Crossroads?

Yes, Crossroads in the Hague. But it won’t all end up in the sermon.

This makes me want to get together some like minded friends and have a celebration of Noah’s deliverance of mankind. Or, just taking the next time we get together at the Wine Dive and calling it that.

Go for it! Just don’t end up sprawling half-naked somewhere and embarrassing yourself.

Well, I sure won’t invite my kids!

Nice to learn we’re stepping in Noah’s footsteps by making wine at the City Vineyard in The Hague. Looking forward to seeing you Sunday, Andrew!

I was thinking of you! Inspirational!

Banquo’s ghost again. Didn’t Paul introduce a theological reading of Genesis 3 in Romans 5? Should we not be guided by that? Otherwise, clearly you’re right: not an inkling of original or inherited sin and the need for deliverance through an atoning messiah in the OT. Unless we read backwards a fresh meaning into it, not only Genesis 3, but the Abraham story as well, as Paul did. Noah gets a similar re-reading in 1 Peter 3, but as it’s symbolic, perhaps it doesn’t count.

How does the New Testament predict the future?
Who will be taken? Who will be left behind? Darn it, we’re all too late anyway!
Resurrection in the Old Testament: literal or metaphorical?
Thom Stark on the coming of the Son of Man: the Bible gets it right, Jesus gets it wrong?
END_OF_DOCUMENT_TOKEN_TO_BE_REPLACED