Andrew: I wonder, though, if we don…
Samuel Conner: Thank you, Andrew; this is…
Andrew: Esther, thanks for this. It…
Esther: Quirky doctrines now found…
Andrew: Esther, I presume that the…
END_OF_DOCUMENT_TOKEN_TO_BE_REPLACED

Why is there no “gospel” in the Gospel of John?

Gospel and salvation
Gospel of John 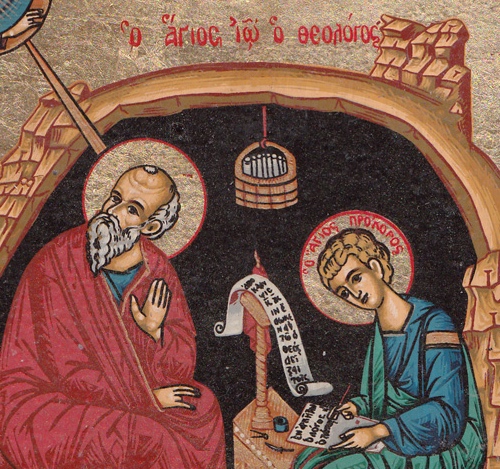 Here’s an irony, surely. The Gospel to which everyone turns for their definition of the “gospel” is one of the few books of the New Testament in which the euangelion word-group does not appear. The other gospel-free texts are Titus, James, 2 Peter, the letters of John, and Jude—all minor epistles and three of them Johannine. It’s John who gives us the classic statement, so beloved of “evangelicals”, so often the theme of “evangelists”: “For God so loved the world, that he gave his only Son, that whoever believes in him should not perish but have eternal life” (Jn. 3:16). But he nowhere uses either the noun euangelion or the verb euangelizō.

Does that tell us anything interesting? I think it does. I think that the anomaly highlights a pervasive and persistent misunderstanding of “gospel” in the New Testament.

Modern evangelicalism has, for its own historical reasons, taken the saving death of Jesus out of its narrative-historical context and has put it firmly at the heart of its theological programme. It has then taken the word “gospel”—rightly perceiving it to be central to the New Testament kerygma or proclamation—and has applied it to the theological abstraction, without bothering to check whether the word and the concept actually line up.

The euangelion word-group belongs to the sphere of ancient “political” discourse. The background for its use in the New Testament is to be found in several Old Testament texts which speak of the proclamation of good news to Israel regarding such impending events as the return of the captives from Babylon, the rebuilding of Jerusalem, the defeat of YHWH’s enemies, and deliverance from judgment. For example:

This language had a secondary resonance in the imperial discourse of the Greek-Roman world. The best known illustration is the Priene Calendar Inscription (9 BC), which speaks of the birthday of the god and saviour Augustus as “the beginning of the good tidings (euangeliōn) for the world that came by reason of him”. Comparison has often been made with Mark 1:1: “The beginning of the gospel of Jesus Christ, the Son of God.”

So when the euangelion word-group pops up in the New Testament, both in the Synoptic Gospels and in the literature of the apostolic mission in the pagan world, in close connection with ideas of kingdom (e.g., Mk. 1:14-15) and kingship (Rom. 1:2-4), it should be clear that what is being announced is an imminent intervention of YHWH to judge and deliver his people that would have far-reaching “political” implications for the nations ruled by Rome.

I would argue, in fact, that one of the best texts for understanding the meaning of “gospel” in the New Testament is Revelation 14:6-12. Following his vision of the 144,000 martyrs gathered with the Lamb on Mount Zion, who had been “redeemed from mankind as firstfruits for God and the Lamb” (14:1-5), John sees an angel “flying directly overhead, with an eternal gospel to proclaim to those who dwell on earth, to every nation and tribe and language and people”.

This is the “gospel” that the early churches proclaimed to the nations of Greek-Roman world. It was a message not of personal salvation but of the impending historical judgment of the living creator God on the whole political-religious system of pagan empire:

A second angel announces the coming fall of Babylon the great, which is Rome. A third vividly depicts the torment of those people who wholeheartedly supported the idolatrous imperial régime.

How was this good news? It was good news because it meant that the one true living God, who created the heavens and the earth, was about to establish his own empire, through his Son as a proxy ruler at his right hand, in place of the corrupt and deceitful powers that for so long (cf. Acts 17:30; 1 Cor. 2:6) had ruled the oikoumenē, from Jerusalem to Spain.

The other significant omission from John’s Gospel, in this regard, is Jesus’ apocalyptic discourse. In the Synoptic Gospels, which begin with the proclamation of “good news” that the kingdom of God is at hand, both as judgment and salvation, Jesus explains to his disciples that the age will end with a war against Rome and the destruction of Jerusalem and the temple, which will be the concrete historical vindication of the Son of Man and of those who believed in him (Matt. 24:3-31; Mk. 13:3-27).

This narrative-historical framework for the mission of Jesus to Israel has been largely suppressed in John’s Gospel. The Son of Man is not the representative of suffering Israel who is brought to the throne of God to receive a kingdom. He is one who descends from the Father and returns to the Father (Jn. 3:13). There is a coming judgment and resurrection (Jn. 5:25-29), and a vestige of the expectation that the Son of Man will be seen coming with the clouds of heaven within the lifetime of the disciples (Jn. 21:22), but nothing of the graphic prelude to the eschatological crisis that we find in the Synoptics. John is more interested in the destruction of Jesus’ body than in the destruction of the temple (Jn. 2:18-21).

Caiaphas’ opinion that “it is better for you that one man should die for the people, not that the whole nation should perish” (Jn. 11:50) has historical plausibility. Kingdom is at issue at Jesus’ trial, but he tells Pilate that his kingdom “is not from here”; and when he is asked by Pilate if he is a king, he shifts the ground: “You say that I am a king. For this purpose I was born and for this purpose I have come into the world—to bear witness to the truth. Everyone who is of the truth listens to my voice” (Jn. 18:37).

Unlike the dominant tradition in the New Testament, which at every point is dependent on a reconstructed prophetic vision of the story of Israel and the nations, we sense that with John we have come adrift from the Old Testament narrative and have lost contact with the euangelion word-group in the process.

The long story that begins with the announcement of the good news that the kingdom of God is at hand and runs through to the defeat of Babylon the great and the vindication of the martyrs of the early church has been condensed down to John’s non-gospel of spiritual enlightenment, presented against the dark background of the Jews’ violent rejection of Jesus and his followers.

I’d love to get your thoughts on this video by the BibleProject, Andrew. https://www.youtube.com/watch?time_continue=495&v=Q0BrP8bqj0c

I think this kind of reading is gaining a lot of popularity while at the same time largely ignoring the historical aims of the Old and New Testaments. The Gospel here seems to be all about creating communities of new humanity focused on love and non-violence and not at all about Israel’s troubled existence among pagan empires. From my view, this Jesus discredits (though it is called “re-interpretation’) what are the clearly political-historical expectations of the Biblical writers.

Thanks for this. I completely agree with you.

True, euangelion does not appear in John’s gospel, but angellousa does in John 20:18 where it reads that Mary Magdalene “announced [her] news” to the disciples: “I have seen the Lord.” And certainly her news was gospel.

In fact, euangelion appears only once in the five NT documents attributed to John – Revelation 14:6 – where it is “the eternal gospel” which an angel has to preach “to every nation, tribe, language, and people.” BTW: neither does euangelion appear in Luke’s gospel, though it pops up in Paul’s farwell sermon to the Ephesian elders in Acts 20:24, the other NT document attributed to Luke.

I think it is more accurate to say that John’s gospel (1) includes a direct reference to the gospel, albeit in a verb form, and (2) contains the first humanly vocalized indication of its content: He is risen! Which occurs precisely where it should in the narrative and send us back to chapter one: John 1: 14, 18 especially.

It’s a good observation, Brad. Oddly, the simple verb angellō occurs only here in the New Testament and in a variant reading of John 4:51 in place of legontes: “As he was going down, his servants met him and told (ēngeilan) him that his son was recovering.” That was good news, but I would have thought that the verb really means only “to deliver a message”, which is what an angelos (“messenger, angel”) does; angelia is simply a message. Notice that Mary goes to the disciples and announces (angellousa) that “‘I have seen the Lord”’, and these things he said to her” (Jn. 20:18). It may be that angellō is used because her announcement includes the communication of a message—the words that Jesus had said to her.

So yes, Mary brings good news to the disciples, but the language and story convey nothing of the public-political dimension of the euangelion that we find in the mainstream New Testament tradition.

The “good news” of Revelation 14:6 is not that Jesus has been raised from the dead but that the hour of God’s judgment against pagan Rome has come. The euangelion is the public proclamation of that political outcome across the continent, not a private messaging to the disciples.

The verb euangelizomai is common in Luke.

Thank you, Andrew, for replying so promptly and helpfully. I’m now wondering whether the verb angellō might have been reserved for a certain kind of (wonderful, near ecstatic) message, as your mention of the variant in John 4:51 coupled with its use in MM’s instance would lead me to think. I share your view of the gospel’s fullness, that it opens onto the broadly political vision we see in the Magnificat, Jesus’ homily in Nazareth (Luke 4), Matthew 25, and Revelation. And of course this NT vision builds upon and, in a way, completes the OT vision of the Day of YHWH and the fast YHWH chooses for his people (Is. 58). And yet were it not for the (crazy, wonderful) event implied in MM’s (near ecstatic, nonsensical) announcement, virtually all of the material we call the NT would never have been written – let alone collected into scripture. So if, as Jesus’ friends have believed, his bodily resurrection is God’s “yes” to all the peaceable kingdom / Day of YWHW promises in the OT, then the gospel’s consummation, in history and beyond, is inaugurated with (and prefigured by) MM’s post-resurrection encounter with the Gardener and her announcement of it to the others. But, then again, perhaps my own, near ecstatic love of MM’s story has me thinking more devotionally than exegetically. Cheers!