Andrew: Thanks for this, John. An…
davo: When people come to faith in…
John Morehead: Thank you for this. I always…
Samuel Conner: I see radical contrasts. For…
Katapetasma: Jesus entered Jerusalem as…
END_OF_DOCUMENT_TOKEN_TO_BE_REPLACED

The scandalous particularity of Jesus (0 comments)
Is there only one way to heaven? (3 comments)
Jesus and the Capitol Hill mob (10 comments)
Now available! Hell and Heaven in Narrative Perspective (second edition) (1 comment)
END_OF_DOCUMENT_TOKEN_TO_BE_REPLACED

Christmas according to St Paul

Paul appears not to have known the Christmas story—or not to have been much interested in it, at least. In the letters that have survived he makes no mention of a census, a journey to Bethlehem, angels, shepherds, the presentation in the temple, astrologers from the east, the flight to Egypt, or the massacre of the infants. 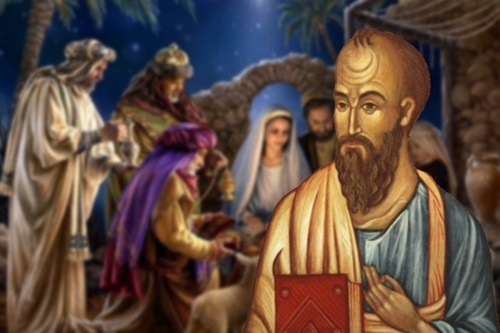 We have, to the best of my knowledge, only two references to Jesus being “born” in Paul’s writings. One is in the “Christ hymn” of Philippians 2: “being born (genomenos) in the likeness of men”. The second is this passage from Galatians:

But when the fullness of time had come, God sent forth his Son, born (genomenon) of woman, born under the law, to redeem those who were under the law, so that we might receive adoption as sons. (Gal. 4:4–5)

What do these brief statements tell us about Paul’s understanding of the significance of the birth of Jesus? I’ll start with the Galatians passage. The exegesis is sketchy—but then it’s Christmas.

After the coming of Christ, Jews were or would be justified not by being Jewish and living under the Law of Moses, but by their faith in what God had done and would do through Jesus.

It’s an apocalyptic or eschatological argument. There’s much more at stake here than personal salvation.

The question was this: in this time of momentous political-religious upheaval in the history of the people of God, which group would turn out to have got it right? Who would in the long run be justified? Who would be finally vindicated? The Jews holding to the Law of Moses? Or those people—Jews and Gentiles—who were convinced that Jesus would eventually judge and rule over the nations of the ancient world?

Paul is writing to Gentiles principally, so he classifies being under the Law as a sub-species of enslavement to the “elementary principles of the world”, but at the forefront of his mind he is a Jew making sense of the significance of Jesus for Israel.

When the fullness of time had come

The words “when the fullness of time had come” highlight—as I read the passage—not the moment of Jesus’ birth but the beginning of his prophetic-messianic ministry to Israel. The statement is explained by Mark 1:14-15:

Now after John was arrested, Jesus came into Galilee, proclaiming the gospel of God, and saying, “The time is fulfilled, and the kingdom of God is at hand; repent and believe in the gospel.”

God sent forth his Son

“God sent forth (exapesteilen) his Son”, therefore, is not a reference to the incarnation. It is not a sending forth from heaven. The language is familiar from the Greek Old Testament—to give a couple of pertinent examples:

…and he said to me, Son of man, I am sending you out (exapostellō) to the house of Israel, those who are embittering me—who embittered me, they and their fathers, to this very day, and you shall say to them, “This is what the Lord says.” (Ezek. 2:3–4 LXX)

We are reminded, of course, of Jesus’ programmatic parable of the wicked tenants (Matt. 21:33-41; Mk. 12:1-9; Lk. 20:9-16). The owner of the vineyard sends first his servants and then his Son to claim the fruits of righteousness from rebellious Israel. Dunn comments that the parable provides “probably the closest parallel, with its thought of Jesus as ‘beloved son’ being sent as the eschatological climax of God’s dealings with Israel and being killed for his inheritance as a consequence of his mission”.1

Born of a woman

The phrase “born of a woman” was also a common Jewish idiom. There is no reason to think that Paul is expressly excluding a human father or alluding to Jesus’ miraculous conception. The phrase appears to connote especially the frailty, imperfection, and suffering of humanity:

For a mortal, born of woman (gennētos gunaikos), is short–lived and full of aggravation… (Job 14:1 )

For how can a mortal be right before the Lord? Or who, born of woman, could purify himself? (Job 25:4 LXX)

Pride was not created for human beings, nor violent anger for what is born of women. (Sir. 10:18)

As what can he, born of a woman, be reckoned before You? Kneaded from dust, his body is but the bread of worms; he is so much spit, mere nipped-off clay—and for clay his longing. (1QS 11:21–22)

Truly, I say to you, among those born of women there has arisen no one greater than John the Baptist (Matt. 11:11)

Incidentally, my view regarding the “virgin conception” of Jesus is not that it didn’t happen but that it’s been misunderstood.

Born under the Law

So Paul’s Christmas story in Galatians is that Jesus was born into the troubled condition of Israel in order to redeem his people from their enslavement to a Law that could not justify them in the face of the impending eschatological crisis.

Paul represents that part of Israel that has moved from childhood to adulthood, from slavery to freedom, and because the guardianship of the Law is no longer in effect, Gentiles are also entering into this inheritance by believing and being baptised into Christ (cf. Eph. 2:11-22). The Gentiles are not “redeemed” as such, but they become part of redeemed Israel.

Not the Prince of Tyre

If the parable of the wicked tenants gives us the interpretive frame for Galatians 4:6, I suggest that the story of Christ’s faithfulness and vindication in Philippians 2:6-11 is constructed—in effect—as the inverse of Ezekiel’s story of the Prince of Tyre.

The Prince of Tyre was “born” (egenēthēs) in “the delight of the orchard of God”; he was “born in the midst of fiery stones… born blameless in your days…” (Ezek. 28:13-14 LXX). He exalted himself, aspiring to be a god, but he was only a man and he would be destroyed by uncircumcised nations (Ezek. 28:7, 10 LXX). Like the king of Babylon and Antiochus Epiphanes, therefore, he becomes a type for the pagan ruler who makes himself equal to God.

Jesus, by contrast, did not seek to exploit, cling to, or attain equality with God. He did not exalt himself. He made himself of no account, taking the form of a servant. He was “born in the likeness of men”, humbled himself, was obedient to the point of death on a cross, and like the Prince of Tyre was killed by the uncircumcised. But God exalted him and gave him a name and authority above all other powers—including the divine Caesar—to judge and rule over the nations.

In the second story, Jesus is born to be the faithful servant who pursues a path of obedience and extreme humiliation, but who is raised to the right hand of Israel’s God as lord and king not only over Israel but also over the hostile nations of the ancient world.

Put those two stories together, and we have a pretty good summary statement of the true meaning of Christmas.

So, I’m down with all that, and you made me look back over Galatians 4 which, considering the contrast with the span of time Israel is under the Law, very much seems to indicate the “fullness of time” is meant to connect with the “redeeming” and not the “born of a woman” part.

But I am curious as to why Paul included that phrase. Even though it’s just a common Jewish idiom for mortality in all its lowliness and incapacity, why even bring it up? Is it to underscore the gravity of the deed, that a mere mortal could accomplish such a thing?

A bit late, but the question is answered here, in case anyone’s wondering.

I’m again struck by the uniqueness of the birth accounts in Matthew and Luke, both describing unambiguously a conception which was without human agency, but through the Holy Spirit. You suggest we look at what the texts actually say. This is what the texts say.

You also say that your view of the virgin birth is “not that it didn’t happen”, which might mean, but not necessarily, that it did happen.

So I wonder what you think these texts are actually saying with regard to a virgin birth, and if they do say the birth of Jesus was a virgin birth, by the Holy Spirit, what bearing this has on the interpretation of the story, and indeed the person of Jesus?

Couldn’t the virgin birth (if we accept it as anything more than a fairy tale, or a metaphor of something else) lend credence to the many textual suggestions in the gospels that Jesus was both God and man, accomplishing the forgiveness of sins for his people and much more?

This is a digression from your main focus in your post, which looks at what Paul says, if anything (in your view nothing), about the birth of Jesus. Which is very interesting as usual, but far too challenging for a detailed response during a few minutes’ retreat from the pressing throng on Christmas Day.

So back to the merry-making, whilst these profound and disturbing thoughts are quietly processed by the neuro-transmitters and digested by the enzymes in the deeper levels of the Santa Claus grotto of the theological subconscious.

How Paul made up what was lacking in Christ’s afflictions
Born of a woman
Jesus, Paul, and emergents’ anxieties about the wrath of God
How beautiful on the mountains were the feet of Jesus

The scandalous particularity of Jesus
Is there only one way to heaven?
Jesus and the Capitol Hill mob
Now available! Hell and Heaven in Narrative Perspective (second edition)
Progressive Christianity and the narrative-historical method
A happy disappointing Christmas to everyone!
Podcast: Talking with Lynsey and Stuart Gilmour about an “alternative” approach to mission in Scotland
Podcast: The ends of the ages: church in the Anthropocene
END_OF_DOCUMENT_TOKEN_TO_BE_REPLACED