jasonc65: Kevin, You are all over the…
Andrew: I think it’s possible that…
Kevin Bravo:  We’ve all sinned, but Jesus…
Peter: Since ancients believed new…
Samuel Conner: Just today, before reading…
END_OF_DOCUMENT_TOKEN_TO_BE_REPLACED

Making Jesus small again (5 comments)
The throne of Jesus and the throne of God (0 comments)
Christendom, exile, and the kingdom of God (2 comments)
Answers to questions about hermeneutics, history, and hell (1 comment)
END_OF_DOCUMENT_TOKEN_TO_BE_REPLACED

Daniel, desolation, and the decreed destruction of the desolator 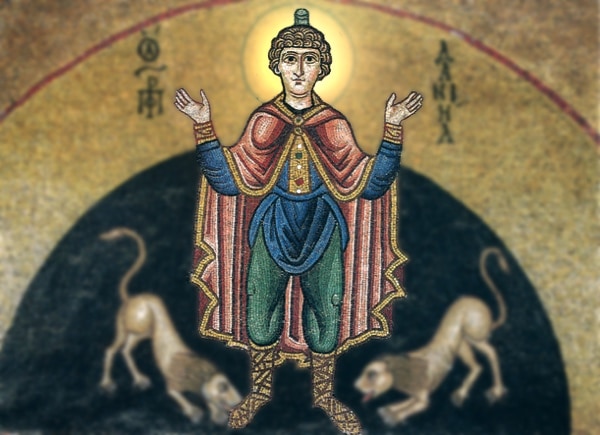 In answer to Drew’s question, Daniel is in Babylon, Jerusalem is in ruins, the Jews have become an object of scorn and ridicule among the nations. He confesses the sins of his people and prays that God will be merciful, that he will bring his anger and wrath against the city to a swift end, and make his face to shine again upon his sanctuary (Dan. 9:3-19).

In response “the man Gabriel” comes to him “in swift flight” to reveal what will happen to Jerusalem. It’s not good news.

Jeremiah prophesied that it would be seventy years before the Jews returned from exile in Babylon (Jer. 25:12; 29:10; Dan. 9:2). Gabriel doesn’t deny this, but says that it will take seventy weeks of years to atone fully for Israel’s transgression and bring in a “lasting vindication” of YHWH’s actions (Dan. 9:24). This is perhaps the original punishment multiplied by seven according to the formula in Leviticus 26:28:

From the perspective of the author of Daniel, Israel has continued to walk contrary to the will of God, down to the early second century BC, and therefore is being disciplined sevenfold. I’m inclined to agree with Goldingay that the 490 years should not be taken as precise chronological information.1

The first seven week period begins with the “going out of the word to restore and build Jerusalem,” the precise referent of which is unclear (Dan. 9:25). The end is marked by the coming of an “anointed one, a prince”, who may be Cyrus (cf. Is. 45:1) or more probably an Israelite leader such as Zerubbabel or Joshua—the “two sons of oil” (Zech. 4:14).

Jerusalem will be rebuilt, but the next sixty-two weeks (434 years) will be a troubled time for the city (Dan. 9:25), climaxing in a week of intense distress.

The final week begins when “an anointed one shall be cut off and shall have nothing” (Dan. 9:26). Traditionally, the church has understood this as a reference to the death of the Christ, but in the context of Daniel 7-12 it must be someone involved in the events that led to the Maccabean revolt in 167 BC. It is probably the high priest Onias III, who was ousted by his brother Jason when Antiochus Epiphanes came to power in 175 BC and was treacherously killed in 171 BC (2 Macc. 4:7, 34).

It seems to me more likely that the “prince who is to come” is Antiochus than a Hellenising high priest such as Jason, as Goldingay maintains. Either way, the people of this prince “corrupt” the city and the sanctuary, a reference to the introduction of Greek cultural and religious practices and to the desolation of the temple especially.

The prince makes a “strong covenant” with many Jews, which will last for the final week. This is a compact between the Hellenising faction in Jerusalem and the Greeks, as described in 1 Maccabees:

In those days out of Israel came sons, transgressors of the law, and persuaded many, saying, “Let us go and make a covenant with the nations around us, because from the time we separated ourselves from them many evils have found us.” And the proposition seemed good in their eyes; so some of the people took courage and went to the king, and he gave them the authority to follow the statutes of the nations. And they built a gymnasium in Jerusalem according to the precepts of the nations, and they fashioned foreskins for themselves and apostatized from the holy covenant and joined themselves to the nations and sold themselves to do evil. (1 Macc. 1:11–15)

For half of the final week the legitimate offering of sacrifices in the temple will be stopped, to be replaced by “desolating abominations” (Dan. 9:27; cf. 11:31), referring to pagan sacrifices. Again, we read in 1 Maccabees that Antiochus “constructed an abomination of desolation on the altar” (1 Macc 1:54). The episode is also described by Josephus:

And when the king had built an idol altar upon God’s Altar, he slew swine upon it, and so offered a sacrifice neither according to the law, nor the Jewish religious worship in that country. He also compelled them to forsake the worship which they paid their own God, and to adore those whom he took to be gods; and made them build temples, and raise idol altars, in every city and village, and offer swine upon them every day. (Ant. 12.253)

Gabriel assures Daniel, however, that this distressing time of apostasy—the “time, times, and half a time” during which the arrogant Greek king will make war against the people of the saints of the Most High (Dan. 7:25)—will come to an end when the “predetermined destruction is poured out on the desolator.” Collins says that “desolator” entails a play on the root shmm, which “refers to the god worshiped, the altar dedicated to him, and, here, the human king who is the subject in the first part of the verse.”2

In my view, none of this looks beyond the defeat of the desolating king, Antiochus, the renewal of the ancestral covenant, and the reconsecration of the temple. What Daniel describes is the violent clash with Hellenism in the early second century BC, the apostasy of many in Israel, and the faithfulness of the wise (Dan. 11:32-35). He envisages a decisive judgment on the crisis, when the oppressive Greek forces will be destroyed and their kingdom given to a symbolic figure in human form, representing persecuted righteous Jews (Dan. 7:9-27). This judgment will include a resurrection of many of those who died—the wicked to shame and reproach, the righteous and wise to life and honour (Dan. 12:2-3).

Two hundred years later, however, under a different pagan oppressor, Jesus will identify himself with this figure “like a son of man”, who comes with the clouds of heaven to receive “dominion and glory and a kingdom” from the throne of God (Dan. 7:14). He is less interested in the role of the Gentile king—there is no “predetermined destruction” of the desolator in the Gospels—than in the corruption and faithlessness of the leaders of his people. He expects the persecuted righteous to be vindicated and to be given rule over Israel, himself at their head. But the role of the Gentile king this time will be not merely to desecrate the temple by pagan intrusion (cf. Mk. 13:14) but to destroy it.

Paul, on the other hand, conjures up memories of the Antiochene crisis to different effect. He has in mind a revelation of Jesus that will have an impact not only on the Jews historically but also on the nations. The “man of lawlessness” whom he foresees sounds very much like Antiochus Epiphanes: “the son of destruction, who opposes and exalts himself against every so-called god or object of worship, so that he takes his seat in the temple of God, proclaiming himself to be God” (2 Thess. 2:3–4; cf. Dan. 11:31, 36-37).

This blasphemous opponent of YHWH will be killed by the breath of Jesus’ mouth and brought to nothing by the appearance of his parousia (2 Thess. 2:8).

Making Jesus small again
The throne of Jesus and the throne of God
Christendom, exile, and the kingdom of God
Answers to questions about hermeneutics, history, and hell
Whose names are written in the book of life?
How “liberal” is the narrative-historical method?
Katherine Shaner on the danger of singular saviours
In the likeness of sinful flesh: some reflections for Holy Week
END_OF_DOCUMENT_TOKEN_TO_BE_REPLACED