Andrew: See above.
Andrew: I always struggle with this…
Arthur Davis: Thanks for this one, Andrew…
Jo: “In a narrative-historical…
Andrew: Hi Rosemerryn, thanks. Just…
END_OF_DOCUMENT_TOKEN_TO_BE_REPLACED

When prophecy mostly didn’t fail (4 comments)
What did it mean to be the “fragrant aroma of Christ”? (0 comments)
Oops, mustn’t forget it’s Pentecost Sunday this weekend (0 comments)
No, not that undomesticated Jesus, the other one (9 comments)
END_OF_DOCUMENT_TOKEN_TO_BE_REPLACED

“The Lord said to my lord….” Did Jesus indulge in prosopological exegesis of the Old Testament? 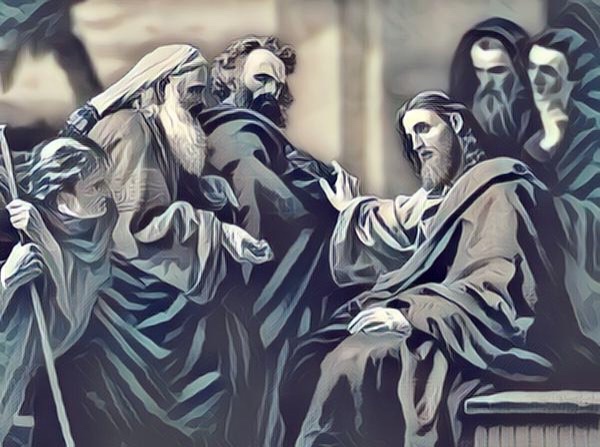 Jesus is teaching in the temple (Mk. 12:35-37). He poses a question: “How can the scribes say that the Christ is the son of David?” After all, David himself said in the Holy Spirit, ‘The Lord said to my Lord, “Sit at my right hand, until I put your enemies under your feet.”’ Jesus has taken Psalm 110 to be the work of David, not a piece of court poetry written about David. So “my Lord” must be a reference to the Christ, who seemingly cannot be David’s son.

The second century theologian Irenaeus thought that this short passage constituted evidence for the pre-existence of Jesus (The Demonstration of the Apostolic Preaching 48-51). He gives two reasons.

First, David has heard, through the Spirit, a conversation in heaven between the “Lord” who is God and the “Lord” who is the Christ a thousand years before the birth of Jesus. Irenaeus explains the mechanism: “the Spirit of God, assimilating and likening Himself to the persons represented, speaks in the prophets, and utters the words sometimes from Christ and sometimes from the Father.”

Secondly, the words “from the womb before the morning star I brought you forth” in the Greek version (Ps. 109:3 LXX) may be understood as an assertion that the Christ “came into being before all.” It’s a reasonable assumption to make that Jesus—or the early church—would have understood his mission in light of the whole psalm, including the line in verse 4 about Melchizedek, which we’ll get to shortly.

I don’t think it’s a good idea to rebuild something that is bound to fall down again before long. I affirm the theological conclusions of the church fathers, but the New Testament should be allowed to speak for itself.

Some modern scholars argue that the authors of the Synoptic Gospels and perhaps even Jesus himself understood this psalm and other Old Testament texts in the same way. For example, Gathercole quotes Knox: “Certainly this passage can be most naturally interpreted on the assumption that Mark thinks of Jesus as a pre-existent supernatural being, to whom David could address himself.”1

This is sometimes called prosopological (from prosōpon, meaning “face” or “personal presence”) exegesis, which Matthew Bates defines in the following terms:

in conjunction with early Christian experiences of Jesus and certain philosophical and mediatorial factors, the idea of separate persons in timeless, intimate communion within the Godhead—Father, Son, and Spirit—was especially fostered and nurtured by a specific reading technique that the earliest Christians utilized as they engaged their ancient Jewish Scripture. …in short this technique—prosopological exegesis—involved assigning dramatic characters to otherwise ambivalent speeches in inspired texts as an explanatory method.2

This is part of a broader endeavour to recover an orthodox christology of divine identity from the Synoptic Gospels after the ravages of historical criticism. I don’t find it very convincing, and I don’t think it’s a good idea to rebuild something that is bound to fall down again before long. I affirm the theological conclusions of the church fathers, but the New Testament should be allowed to speak for itself.

Sit at my right hand

And answering Jesus said, teaching in the temple: how do the scribes say that the Christ is a son of David? David himself said in the Holy Spirit: The Lord said to my lord, Sit at my right hand, until I put your enemies under your feet. David himself calls him lord, and from where is he his son? And the great crowd heard him gladly. (Mk. 12:35-37)

What is said, in the first place, is an instruction from the kyrios who is YHWH to the kyrios who is ʾadon to sit at his right hand “until I make your enemies your footstool.” The assumption must be that the Lord who is ʾadon then proceeds to do just that. In other words, the conversation happens at the time of the inauguration of the king’s rule in the midst of his enemies. Since Jesus did not expect to be seated at the right hand of God until after his death (cf. Mk. 14:62; Acts 2:29-36), we must suppose that he understood David’s words to be prophetic.

Before the morning star

The obscurity of the Hebrew text of Psalm 110:3 has been resolved in the Greek: “from the womb before the morning star I brought you forth.” Gathercole takes this to be a clear “reference to preexistence in a strong sense.”4 No direct reason is given for this conclusion, but two supposed parallels are cited.

Gathercole translates Psalm 71:17 LXX (72:17 MT): “before the sun his name remains.” The verb diamenei, however, is future: David prays that the name or reputation of Solomon will remain before the sun, throughout the coming ages. We are hardly to suppose that he is claiming pre-existence for his son.

The obvious way to read the Greek version of Psalm 110:3, it seems to me, is to connect the two parts of the verse: YHWH has brought forth (exegennēsa)—that is, established—his king before dawn in order that he may rule on the day of his power. The verse is then parallel to Psalm 2:7-9 LXX: YHWH has begotten (gegennēka) his Son at his enthronement in order that he may take possession of the nations and “shepherd them with an iron rod.”

So we have no reason to think that the Jesus of the Synoptic Gospels would have used Psalm 109:3 LXX to assert his pre-existence.

After the order of Melchizedek

Pre-existence is also sometimes inferred from the affirmation that the ʾadon or king is “a priest forever according to the order of Melchizedek” (Ps. 109:4 LXX). The point is made that in Hebrews it is said of Melchizedek that he was “fatherless, motherless, genealogy-less, having neither beginning of days nor end of life, but resembling the Son of God, he remains a priest without interruption” (Heb. 7:3, my translation). Gathercole concludes that Psalm 109:4 was “clearly understood in early Christianity as implicit evidence for the preexistence of Christ.”5

I think this reflects a misunderstanding of—or at least, a failure to take into account—the argument in Hebrews. The person of Melchizedek is introduced into the letter in order to account for the irregularity of Jesus’ status as high priest (Heb. 5:5-6). He is a high priest not after the order of Aaron but after the order of Melchizedek (Heb. 7:11-14).

The point of the comparison is that we have in Melchizedek an equally irregular high priest, who is also a king, who is not qualified by parentage or genealogy, whose origins are unknown, whose death is not recorded, and whose high priesthood is seemingly, therefore, unending.

As is said later, Jesus’ “likeness” (homoiotēta) to Melchizedek consists in the fact that he has become a priest “not on the basis of a legal requirement concerning bodily descent, but by the power of an indestructible life” (Heb. 7:16). Neither Melchizedek nor Jesus is reckoned to have pre-existed.

Matthew Bates places a lot of weight on the reception history, but apart from Irenaeus there seems little reason to think that the early church read Psalm 110 in this fashion.

In Barnabas 12:10 David is said to have known that the scribes “were going to say that the Messiah is the son of David.” He understands the ”error of sinners” and so he “prophesies” the words of Psalm 110:1. The present tense (prophēteuei) may suggest that the presently available scriptures rather than the moment of speaking are in view, but in any case YHWH’s address to “my Lord” is written down in prophetic anticipation of the time of their future relevance. Clement only says that “of his Son the Master spoke thus” (1 Clem. 36:4-5).

Bates argues that “Justin Martyr is explicit and emphatic in affirming that the words of Psalm 109 LXX… reflect a divine dialogue in which David, during the time in which the Christ only preexisted, spoke in the person of God to the yet-to-be-revealed Christ.”6 But it is difficult to see how he has reached this conclusion. Justin says that the “prophet” David “proclaimed (ekēryxe) that He will be born from the womb before sun and moon” (Dialogue with Trypho 76), or that his words were a “pre-proclamation” (proagelikon) of future events. No prosopological exegesis here as far as I can tell.

So how is he his son?

The explanation is immediately apparent. Jesus would be the Christ, the Lord seated at the right hand of God, by virtue of his resurrection from the dead. His rule or kingdom, therefore, would be more exalted than that of David, and it would last for ever. That is why David must call him “my Lord.”

This is Peter’s argument in his Pentecost sermon (Acts 2:24-36). David was a prophet. He knew that God would “set one of his descendants on his throne.” He “foresaw and spoke about the resurrection of the Christ, that he was not abandoned to Hades, nor did his flesh see corruption.” David himself died and did not ascend into heaven, but he says, ‘The Lord said to my Lord, “Sit at my right hand, until I make your enemies your footstool.”’ So Peter concludes that God has made this particular descendant of David “both Lord and Christ” by raising him from the dead. It is from that circumstance that the son surpasses the father.

Luke puts the argument in Paul’s mouth in his speech to the “Men of Israel” in the synagogue in Pisidian Antioch (Acts 13:26-39); and Paul himself summarises his “gospel” in the same terms: the son of David according to the flesh “was declared to be the Son of God in power according to the Spirit of holiness by his resurrection from the dead, Jesus Christ our Lord” (Rom. 1:4).

So in this piece of anti-scribal polemic Jesus cites the words of the prophet David as evidence that Israel’s true messiah would be a greater king than David because of his resurrection from the dead.

Why did Jesus instruct his disciples not to preach the kingdom of God to Gentiles and Samaritans?
When prophecy mostly didn’t fail
No, not that undomesticated Jesus, the other one
James Tabor’s failed failed apocalypse of the New Testament argument
What is the essence of Christianity?

When prophecy mostly didn’t fail
What did it mean to be the “fragrant aroma of Christ”?
Oops, mustn’t forget it’s Pentecost Sunday this weekend
No, not that undomesticated Jesus, the other one
What does Luke’s account of Paul’s visit to Athens tell us about how to do “missional church”?
Not sure about the charts: please explain…
Kingdom of God and missional church: not as difficult to define as you might think
Defying history: the future of the church in a Third World Culture
END_OF_DOCUMENT_TOKEN_TO_BE_REPLACED