Andrew: See above.
Andrew: I always struggle with this…
Arthur Davis: Thanks for this one, Andrew…
Jo: “In a narrative-historical…
Andrew: Hi Rosemerryn, thanks. Just…
END_OF_DOCUMENT_TOKEN_TO_BE_REPLACED

When prophecy mostly didn’t fail (4 comments)
What did it mean to be the “fragrant aroma of Christ”? (0 comments)
Oops, mustn’t forget it’s Pentecost Sunday this weekend (0 comments)
No, not that undomesticated Jesus, the other one (9 comments)
END_OF_DOCUMENT_TOKEN_TO_BE_REPLACED

So also my heavenly Father will do to every one of you: the parable of the unforgiving slave 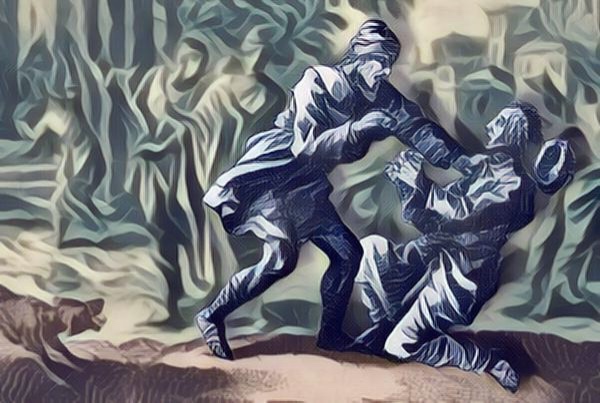 I rather overlooked the relevance of Jesus’ parable about an unforgiving slave in Matthew 18:23-35 for the recent debate about whether he interpreted the foreseen destruction of Jerusalem as God’s deliberate punishment of his people.

He then proceeds to tell a story about a king or master who settles his accounts with his slaves.

The first slave brought to him owes ten thousand talents, which is a massive, indeed implausible, sum. He cannot repay, and the master is about to sell him and his family to another slave owner, when the man begs for mercy, asks for patience, and promises to pay back everything. The master is impressed by his contrition, has pity, and forgives him the debt.

But the villainous fellow straightaway goes out and collars another slave who owes him a mere hundred denarii. He does not show mercy to the man and has him thrown into prison.

This upsets the other slaves in the household, and they report the incident to the master, who is extremely angry and delivers the unforgiving slave to the “torturers” (basanistais), not merely “jailers,” until he should repay all the debt—in other words, he’s there indefinitely (Matt. 18:34).

The bad guy gets his comeuppance.

Like other parables of judgment in Matthew (eg., Matt. 13:24-30, 47-50), this is a story about God settling his account with indebted Israel at the close of the age of second temple Judaism. The possibility of forgiveness is held out to Israel, but if the repentance is sham (cf. Matt. 3:7), forgiveness will be revoked, and unrighteous Israel will be delivered to the “torturers” until the impossible debt is repaid.

The parable is addressed to the disciples, so the point is presumably that if they do not persistently forgive one another, they will share the same fate as the rest of Israel.

In any case, the application is made explicit: “So also my heavenly Father will do to every one of you, if you do not forgive your brother from your heart” (Matt 18:35). In this regard, the parable dramatises the concise teaching from the sermon on the mount:

…and forgive us our debts, as we also have forgiven our debtors (Matt. 6:12)

In the context of the Gospel as a whole, not to be forgiven by the Father means to be burned with unquenchable fire or to be sentenced to the Gehenna of fire, which I take to be a reference to the devastating judgment of Jerusalem (Matt. 3:10-12; 13:30, 50).

It seems that the practice of torturing prisoners was disallowed to Jews.1 The idea, therefore, may be that merciless Israel would be handed over to Gentile tormentors indefinitely, parallel to Luke’s saying about Jerusalem being “trampled underfoot by the Gentiles, until the times of the Gentiles are fulfilled” (Luke 21:24).

In other words, the detail in the parable is a figure for the suffering inflicted by Rome in the course of the war. But in that case, we have in verse 35 a very clear statement to the effect that God would punish his rebellious people with violence. That’s what the “righteousness” of God looked like refracted through the lens of first century Jewish political-religious experience.

Related content
Why didn’t Jesus just come out and say it: God is going to punish you with violent destruction?

Perhaps one could read the “always forgive” command, along with somewhat similar counsel in Mt 5:38-42, through the lens of “de-escalation rather than escalation” of conflict, which would tie into a recurrent theme in Jesus’ warnings to Israel to “repent or perish.”

Violent times are at hand, and those who are unwilling to bend in the gale, or to flee from it, will be broken by it. In such times, if the community of Jesus-followers cannot even be at peace with itself, it too will be destroyed.

When prophecy mostly didn’t fail
What did it mean to be the “fragrant aroma of Christ”?
Oops, mustn’t forget it’s Pentecost Sunday this weekend
No, not that undomesticated Jesus, the other one
What does Luke’s account of Paul’s visit to Athens tell us about how to do “missional church”?
Not sure about the charts: please explain…
Kingdom of God and missional church: not as difficult to define as you might think
Defying history: the future of the church in a Third World Culture
END_OF_DOCUMENT_TOKEN_TO_BE_REPLACED