Keith Wansbrough: Looks good now, thanks. The…
Andrew: Thanks, Keith. It was…
Keith Wansbrough: The chart didn’t appear for…
Juanita: Hi there Sam We spoke…
Andrew: David, many thanks for this…
END_OF_DOCUMENT_TOKEN_TO_BE_REPLACED

Cleanthes’ “Hymn to Zeus” and the renewal of monotheism (3 comments)
Conversation with Mike Bird about In the Form of a God (0 comments)
Answering Mike Bird about the referent of "all things" in 1 Corinthians 8:6 (0 comments)
Interview: The Preexistence of Christ and Narrative Historical Theology (1 comment)
END_OF_DOCUMENT_TOKEN_TO_BE_REPLACED

Who was the man without a wedding garment at the wedding feast? 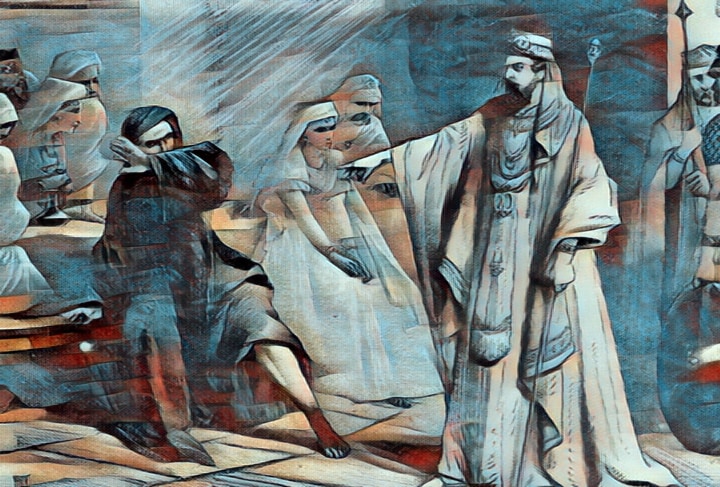 Jesus’ parable of the wedding feast in Matthew 22:1-14, like the two parables preceding it, is directed against the chief priests and elders of the people who questioned his authority to pronounce judgment on the temple (Matt. 21:23-27). The leaders of Israel are those who refuse to attend the marriage celebration for the king’s son, and in his anger the king “sent his troops and destroyed those murderers and burned their city,” which is an unnerving image to evoke today against the backdrop of the massive Russian advance on Kyiv (Matt. 22:7). Those Jews who are then invited in from the roads are the “bad” tax collectors, prostitute, sinners, and a few “good” men and women who have responded positively to Jesus’ message. This is entirely a parable about first century Israel. Gentiles are not in view.

When the guests are finally assembled, the king enters and notices that one of them is not clothed in a wedding garment (Matt. 22:11). “Friend,” he asks, “how did you get in here without a wedding garment?” The man is speechless. The king instructs his servants to bind the man hand and foot and “cast him into the outer darkness. In that place there will be weeping and gnashing of teeth.” Jesus concludes: “For many are called, but few are chosen (eklektoi).”

In a piece on this passage some years back I concluded that the man turned out not to be one of the “chosen” who would “have to serve Jesus effectively in the coming decades, proclaiming the good news of the kingdom of God first to Israel and then to the nations.” In a recent comment Farooq Sadiq expressed some frustration with the analysis, and I take his point. The curious detail needs a better explanation, and I think we can provide one.

It has often been argued that the expulsion of the guest was not part of the original parable. In another comment on the post Roger Amos suggested that it came from another parable that made the same point about God’s rejection of the leadership of Israel. “So the solitary guest who turned up unsuitably dressed was guilty of the same kind of apostasy as those first invitees who refused to attend in the Parable of the Wedding Feast, consignment to the outer darkness being the penalty.”

We are certainly given the impression that the “bad and good” people from the streets were brought in “as they were,” which makes it very odd that one fellow is faulted for not being properly dressed. So I think that the basic literary-critical observation is correct: two traditions have been joined here. But it seems to me rather clumsy of Matthew to add a narrative development that merely repeats the point of the main parable in such an incongruous fashion. Why not let the two parables stand independently?

More probably, therefore, the motif of the wedding garment introduces a new thought, beyond the immediate condemnation of the leadership of Israel, and I wonder if we shouldn’t find it in the announcement of the “marriage supper of the Lamb” in Revelation 19:

Then I heard what seemed to be the voice of a great multitude, like the roar of many waters and like the sound of mighty peals of thunder, crying out, “Hallelujah! For the Lord our God the Almighty reigns. Let us rejoice and exult and give him the glory, for the marriage of the Lamb has come, and his Bride has made herself ready; it was granted her to clothe herself with fine linen, bright and pure”—for the fine linen is the righteous deeds of the saints. And the angel said to me, “Write this: Blessed are those who are invited to the marriage supper of the Lamb.” (Rev. 19:6–9)

This wedding feast serves a narrower purpose than is usually assumed. John has heard already that the kings of Rome “will make war on the Lamb, and the Lamb will conquer them, for he is Lord of lords and King of kings, and those with him are called and chosen (klētoi kai eklektoi) and faithful” (Rev 17:14). Then, after the fall of the oppressive and corrupt city Babylon the great, a loud voice in heaven declares that God has “avenged on her the blood of his servants” (Rev. 19:1-2). Here we have the narrative setting for the marriage of the Lamb, and it is clear that the “Bride” who has made herself ready is not the universal church throughout the ages but specifically the community of the martyrs against whom the kings of Rome made war.

The bride has been given the opportunity to “clothe herself with fine linen, bright and pure.” This statement needs to be read carefully. The bride is not clothed as a reward at the time of the marriage. Rather, “it was given to her that she might put on what is made of fine linen, bright, pure,” and this clothing is “the righteous deeds of the saints” (Rev. 19:8, my translation). So the saints are already clothed in the righteous deeds that they performed when they were suffering persecution and martyrdom. They had made themselves ready. Their qualification for participation in the marriage—in this case, as the collective bride—is their faithful Christ-like suffering.

So the new thought that has been added to the parable of the wedding guests may have been drawn from a later apocalyptic tradition that had in view the vindication of the martyrs in the wider Greek-Roman world following the enactment of God’s wrath against Rome. Those who are married to the martyr Christ must be those who suffered for his sake, and the man without the wedding garment is excluded for that reason.

The thought has been accommodated to the perspective of Jesus and the argument about Israel. The interloper is thrown into the “outer darkness,” where there is “wailing and gnashing of teeth” (Matt. 22:13). This is not “hell”; it is an image of the exclusion of unrighteous Israel from the regeneration of God’s people (cf. Matt. 8:12; 13:42, 50; 24:51; 25:30).

It may even be, I suppose, that the tradition began here. The “chosen” or “elect” are the envoys sent out to bear witness to Israel and the nations regarding the coming act of divine judgment and restoration in the period leading up to the war against Rome. They will be delivered up to tribulation and put to death; they will be hated by all the nations for the sake of Jesus’ name. But the one who endures to the end of this period of eschatological mission will be saved. Israel will suffer unprecedented hardship, but the time will be cut short for the sake of the “elect,” and ultimately the Son of Man will send out his angels to “gather his elect from the four winds, from one end of heaven to the other” (Matt. 24:9-14, 22, 31).

So we are back not far from where we started. The few who are chosen, who are assured of a place at the marriage feast of the vindication of the Son, are those who will have faithfully endured suffering for the sake of his name during the period of severe tribulation in the years building up to the catastrophe of God’s judgment against Jerusalem. The extremity of the situation is such that, in effect, there is no other path: only those who take up their own cross and follow Jesus will be rewarded at the coming of the Son of Man in his kingdom (Matt. 16:24-28).

Cleanthes’ “Hymn to Zeus” and the renewal of monotheism
Conversation with Mike Bird about In the Form of a God
Answering Mike Bird about the referent of "all things" in 1 Corinthians 8:6
Interview: The Preexistence of Christ and Narrative Historical Theology
How we got from kingdom to Trinity: Constantine and pagan monotheism
Jesus and Paul, works and faith
Some hazardous thoughts on the Trinity for a new year and a new era
Was it Roman custom for people to return to their home town for a census?
END_OF_DOCUMENT_TOKEN_TO_BE_REPLACED