Andrew: Thanks, for this, Richard…
Samuel Conner: Just starting into your new…
Richard Blakesley: Hi Andrew, I am thinking…
Andrew: I take the seventh trumpet…
davo: Hi Andrew. Subduing a…
END_OF_DOCUMENT_TOKEN_TO_BE_REPLACED 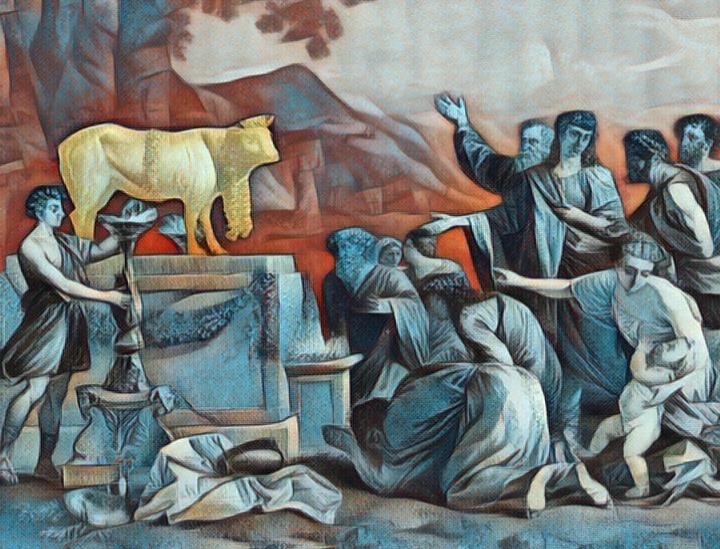 Following on from the discussion of whether Paul includes Jesus in the divine identity in 1 Corinthians 8:6, let’s consider the claim that Paul identifies Jesus with YHWH when he says, “Shall we provoke the Lord to jealousy (parazēloumen)? Are we stronger than he?” (1 Cor. 10:22).

Since Paul’s revised Shema extols Jesus the kyrios as an agent of creation and redemption, it is likely the same idea should be carried through to the kyrios of Ps. 24:1.2

The argument concludes with an exhortation to “do all to the glory of God” (1 Cor. 10:31); Ps. 24 concludes with the affirmation, “The LORD of hosts, he is the King of glory!” (Ps. 24:10). Therefore, Paul’s encouragement to eat from the fullness of the earth, which belongs to the Lord, for the sake of the glory of God parallels the thought of the psalm.

So we have, in the immediate vicinity, a reference to the “Lord” who is God in the context of an Old Testament quotation.

3. Paul’s statement “what pagans sacrifice they offer to demons and not to God” (1 Cor. 10:20) is also taken from the Old Testament passage: “They sacrificed to demons and not to God” (Deut. 32:17 LXX). Since here the Lord who is provoked to jealousy is the God to whom Israel should have made sacrifices, we have very strong grounds for thinking that Paul intended “Shall we provoke the Lord to jealousy?” to be understood in the same way. The “Lord” of verse 22 is the “God” of verse 20.

ISRAEL → PARTICIPATION IN THE ALTAR → GOD

Sharing in the bread and cup is a participation in the body and blood of Christ (1 Cor. 10:16), but it is not an offering to Christ. It constitutes a participation in Jesus’ sufferings, or in Jesus himself, offered to God, at least for the purposes of the analogy that Paul is developing here (cf. Rom. 12:1). Therefore, it is God who is provoked to jealousy if the integrity of the Lord’s meal is compromised.

4. In the similar argument food in Romans 14 it is God who welcomes both the weak and the strong (3), receives thanks (6), who judges (10-12), who accepts those who serve Christ (18), whose work is destroyed by their quarrelling (20), who assesses the conscientious actions of believers (22). Whatever they do is done in the Lord Jesus and in honour of the risen Lord Jesus (Rom. 14:6-9), who will one day rule over the nations in place of the old gods, but it is done for God.

The same “logic” holds in 1 Corinthians 10:14-33. By sharing in the bread and cup the Corinthians identify with the resurrected Jesus, who has been given all authority to judge and rule, and proclaim the significance of his death “until he comes” (1 Cor. 11:26). But they must do this in a way that does not provoke the Lord God to jealousy but rather brings glory to the one God in thoroughly polytheistic Corinth.

I will start out by saying that this is another proof that the Lord Jesus is God, because Paul (as well as others) does not feel the need to clearly identify to whom the “Lord” refers to in many passages. In adherence to a strict monotheistic faith which Paul (and other NT writers) maintained this would be unthinkable.

In terms of conscience even from the immediate context it has specific reference to the Lord Jesus (cf. 1 Corinthians 8:12). In fact, another point can be made that even though since we can sin against others, all sins are ultimately committed against God alone (Psalm 51:4). Since all sins are ultimately committed against the Lord Jesus demonstrates that He is God.

I will start out by saying that this is another proof that the Lord Jesus is God, because Paul (as well as others) does not feel the need to clearly identify to whom the “Lord” refers to in many passages.

There was no difficulty for Hellenistic Jews in using kyrios for both God and a human master—they didn’t need to explain when they were switching between the two. Paul asked Jesus, “Who are you, Lord?” (Acts 9:5). He is clearly not asking, “Who are you, God?” He is simply responding to an authoritative address. The answer to the question is not “I am God” but “I am Jesus of Nazareth” (Acts 22:8). In this encounter Jesus identifies himself not with YHWH but with the persecuted believers.

This is self-contradictory, Marc. If it’s possible to “sin against others,” sin “against Christ,” as in 1 Corinthians 8:6, puts him in the category of “others,” not of God. Peter asks Jesus, “Lord, how often will my brother sin against me, and I forgive him?” (Matt. 18:21). That doesn’t make Peter God.

As for 1 Corinthians 10:16, if one were to drink the cup of demons and partake of the table of demons would surely mean they were worshiping demons.

No, the point is that Paul does not say that sharing in the Lord’s table is in any sense an offering to Jesus; it’s an identification with Jesus, which is an offering to God. Eating the bread and drinking the cup is a participation in Jesus self-sacrifice that represents the self-sacrifice of the believer (cf. Rom. 12:1). Believers offer themselves to God just as Jesus offered himself to God in his sacrificial death.

1 Corinthians 11:32 is debatable. The judgment in view is the illness and death of some believers. I think this is more likely to be attributed to God than to Christ, who will judge when he comes, not in the meantime.

I am well aware that kyrios can be used of God and a human master, but when doing so there wouldn’t be a constant dilemma between being able to differentiate the Creator from the creature. The use of “Lord” and other words are so many times used where it is not a clear cut case at all.

You totally ignored my point about the worship of demons which takes places when one drinks from the cup of demons and partakes of the table of demons.

Even your appeal to Romans 12:1 further verifies my assertion that the Lord Jesus is God and that worship is to be rendered unto Him.

Therefore, brothers, by the mercies of God, I urge you to present your bodies as a living sacrifice, holy and pleasing to God; this is your spiritual worship.

The Lord Jesus is pleased when believers present/offer their bodies in hoiness unto Him.

“Food for the stomach and the stomach for food,” but God will do away with both of them. The body is not for sexual immorality but for the Lord, and the Lord for the body.

(32) I want you to be without concerns. An unmarried man is concerned about the things of the Lord—how he may please the Lord.

(8) and we are confident and satisfied to be out of the body and at home with the Lord.

(9)Therefore, whether we are at home or away, we make it our aim to be pleasing to Him.

What you affirmed concerning 1 Corinthians 11:32 goes along with what I have written in my first paragraph.

This discussion is quite a bit above my “pay grade”, but perhaps there is some value in the following thought.

I have the impression that part of the force that many traditionalists see in Paul’s modification (granting the plausible inference that this is what that is) of the Shema in terms of its implications for Christology depends on the understanding of the Shema itself as being intended to be understood by its hearers and confessors as a statement about the absolute unity of the Deity.

Decades ago I heard it suggested that this view of the Shema might be an importation of later concerns into the interpretation of the OT, and that in context the force of the Shema was more about the exclusivity of YHWH’s claim on Israel’s covenant loyalty. “YHWH is our god, YHWH alone”.

It seems significant to me that YHWH reckoned that Israel’s demand for a visible king was interpreted by YHWH to be a rejection of Himself as king over Israel. Thereafter, until the division of the kingdom, there would not be just “one god, YHWH”, but “one god, YHWH, and one king (Saul/David/Solomon)”.

These are certainly interesting points you bring up. I think the political statement cannot be decoupled from the theology the Shema teaches. What is so often overlooked is Deuteronomy 6:5.

Deuteronomy 6:4 affirms there is “one Lord” (YHWH), as such He is the only proper recipient of worship (Deuteronomy 6:5). The underlined below is mine.

a. Judaism 101: The Shema can also be translated as “The L-rd is our G-d, The L-rd alone,” meaning that no other is our G-d, and we should not pray to any other.

b. Theological Dictionary of the New Testament (TDNT): The religion of Israel demanded exclusive worship of Yahweh, and therefore all prayer in Israel was necessarily addressed to the one God. It is obvious that this was of decisive importance (2:790, “The Main Features of OT Prayer,” euchomai, Herrmann).

d. In defining Monotheism The Jewish Encyclopedia (1901) affirms that it entails the “worshipers of the one God and of Him alone.” (See the first paragraph)

It would take only one instance where the Lord Jesus is the proper recipient of prayer (worship) to demonstrate that He is YHWH. The fact that the Bible has quite a few examples of this taking place leaves no question concerning His true identity.

Neither the prince of Tyre nor the king of Babylon is Satan
Why did the Jews accuse Jesus of making himself equal to God?
What did Jesus fear in Gethsemane?
Why did Jesus instruct his disciples not to preach the kingdom of God to Gentiles and Samaritans?
The biblical argument about salvation (my soteriology)

Notes on J. Richard Middleton’s The Liberating Image: The Imago Dei in Genesis 1
Our eco-theological blindspots and the climate crisis
Biblical hermeneutics and the destabilising of the world
“Image of God” as eco-theological premise?
A mistake to let them subdue the earth and have dominion over it?
New book coming soon: In the Form of a God: The Pre-existence of the Exalted Christ in Paul
Where is the promise of his coming?
Ten things the church can learn about missions from a narrative-historical perspective
END_OF_DOCUMENT_TOKEN_TO_BE_REPLACED