Andrew: That’s a very interesting…
Peter: In the Old Testament we see…
Andrew: Yes, the distinction between…
Scott: I also forgot to mention…
Scott: Thanks for the reply, Andrew…
END_OF_DOCUMENT_TOKEN_TO_BE_REPLACED

What does Luke’s account of Paul’s visit to Athens tell us about how to do “missional church”? (2 comments)
Not sure about the charts: please explain… (0 comments)
Kingdom of God and missional church: not as difficult to define as you might think (2 comments)
Defying history: the future of the church in a Third World Culture (14 comments)
END_OF_DOCUMENT_TOKEN_TO_BE_REPLACED

What exactly did Jesus get right? 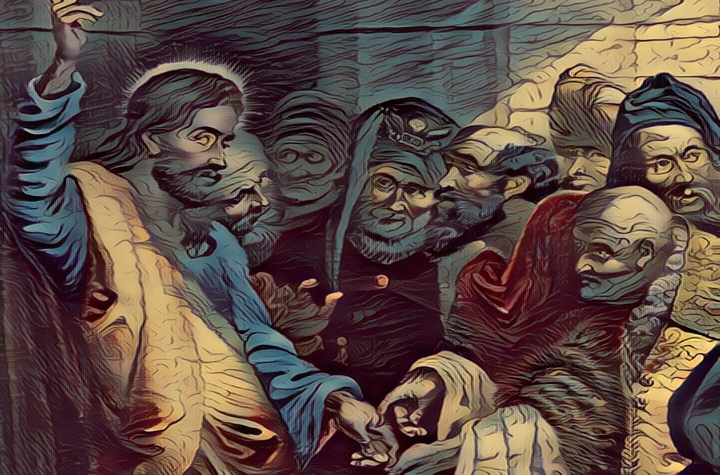 Edwin has an interesting question about the link between Jesus’ furious condemnation of the Jerusalem hierarchy and his subsequent vindication:

I have been trying to get to the point where I have my aha moment in this reframing of the biblical story and what it would mean for Jesus’s message of judgement to be vindicated in his resurrection. Does it mean all his denunciations were backed by God and his moral teachings for following God rightly, without corruption, would now be authoritative, thus silencing the debates between the competing Jewish traditions?

So are the vindication and enthronement of Jesus an overruling of the “competing Jewish traditions” and a validation of his particular vision for Israel?

I take it that the charge against (the leadership of) Israel was wide-ranging. It was the failure to give to God what was God’s (cf. Lk. 20:25), to deliver the fruit of righteousness from the vineyard of God’s people—obedience to the Law in all respects. We may compare Jeremiah’s words against the false trust of the people of Jerusalem, which essentially evoke the decalogue, and which were obviously important to Jesus:

No doubt forms of pettifogging, hypocritical Torah-observance sometimes got in the way of an authentic righteousness, but I don’t think the attack is against religious legalism as we would understand it—at least, this is Matthew’s take on it:

Woe to you, scribes and Pharisees, hypocrites! For you tithe mint and dill and cumin, and have neglected the weightier matters of the law: justice and mercy and faithfulness. These you ought to have done, without neglecting the others. (Matt. 23:23)

I’m also not sure that Jesus was vindicated in the resurrection specifically. Perhaps in part, but the prominence of the “son of man” motif suggests that vindication came with the destruction of the temple, when people would “see” the Son of Man coming with the clouds of heaven, either to be given kingdom or having been given kingdom (Matt. 24:29-30; Mk. 13:24-26; Lk. 21:25-27). The resurrection was deniable; the destruction of Jerusalem and the temple was not.

So the vindication of Jesus the prophet, who denounced the corrupt leadership in Jerusalem, came, within the lifetime of that crooked generation, when the presence of the creator God was no longer found in the Jerusalem temple but in a people who confessed Jesus as Lord in the power of the Spirit.

What Jesus brings into this situation is not a new way of being God’s people but a new solution to the crisis of the present evil age of the pollution and oppression and corruption of God’s people.

The crux of the matter, therefore, as far as the vindication of Jesus is concerned, was not so much that Jews needed to repent. After all, the prophets right up to John the Baptist had said the same thing. Jesus was sent to the mismanaged vineyard of Israel to do no more than the servants sent before him had done: demand the master’s fruit, which is naturally understood in terms of Torah-defined righteousness. What set him apart from the servants/prophets who had gone before him was not the nature of the prophetic task—culminating in the protest in the temple, exactly in the mould of Jeremiah (cf. Jer. 7:1-4, 11)—but the fact that he was the Son who would inherit (e.g., Mk. 12:7).

The resurrection convinced his followers that this was not a futile hope: a dead messiah would inherit nothing. But it would be a long time—forty years of disbelief, opposition, harassment, punishment—before their faith in a dramatically different future existence for God’s people would turn out to have been well founded, a long time before they too would be publicly vindicated and receive their reward.

In the meantime, they were bound to live by the radical “ethic” that Jesus had taught them, which was an eschatological ethic, a missional ethic, a survival ethic, articulated most rigorously in the Sermon on the Mount. This is a body of thoroughly Jewish teaching that begins with the blessing of those who faithfully seek the decisive intervention of God to put things right in Israel and ends with a devastating storm that sweeps away the poorly constructed house of Israel.

It is important to keep in mind that the divisions in first century Israel were generated by the crises of Hellenisation and then Roman occupation: the rigorous Torah-observance of the Pharisees, the compromised co-existence of the Sadducees and Herodians, the violence of the Maccabean tradition and later of the Zealots, the isolationism of the Qumran community…. These were all attempts to solve the “kingdom of God” problem—the apparent failure of God’s government of his people.

What Jesus immediately brings into this chaotic situation is not a new way of being God’s people but a new solution to the crisis of the present evil age of the pollution and oppression and corruption of God’s people. It is not an entirely new solution. It draws on a tradition going back through the stories of the Maccabean martyrs and of the persecuted “wise” in Daniel to Isaiah’s suffering servant. But Jesus brought with him, presumably, the conviction that this would be the decisive moment, that his own suffering and death, would over time inaugurate a new age.

So yes, the vindication and enthronement of Jesus were an overruling of the competing Jewish traditions and a validation of his particular vision for the salvation of Israel. But that was not the whole story.

The Sermon on the Mount does not permanently redefine the ethical-religious life of the people of God. Jesus called, trained, and equipped a group of followers who would have the burdensome and dangerous task of continuing his prophetic mission to Israel after his death, right up to the climactic moment of the destruction of the temple, right up to the end of the age, when it would finally be apparent to all that Israel’s God was effecting a deep re-formation of his people.

From that point on, I think, theoretically, the narrow ethic of the Gospels would give way to a broad-based social-religious ethic modelled on Torah, insofar as it had to address the full scope of settled community life in the age to come, but directed and empowered by the Spirit of the new covenant—an ethic written on the hearts of God’s people rather than on tablets of stone.

> I’m also not sure that Jesus was vindicated in the resurrection specifically.

Surely there is a sense of vindication in that, per Paul, Jesus’ messiahship is declared by the resurrection. It has been argued (by NTW and others; I think I’ve seen this thought at P.OST, too) that the resurrection reversed the sentence of death on the charge of being a false Messiah, and was in effect the Creator’s declaration of “who had been in the right in the matter of Jesus’ trial, condemnation and punishment.”

A question that continues to intrigue me is “why did Jesus conceal himself from Israel after his (bodily) resurrection?” This seems to me an important question, since the mostly private character of his reported appearances after Easter and the absence of extra-biblical historical evidence (which one would think would have survived had the appearances been highly public and as widespread in Israel as the prior public ministry had been) has provided justification for arguments that the resurrection was not bodily, that Jesus didn’t actually “stand up again.”

An answer that seems to me plausible is that the concerns of Jn 11:47-52 are intensified were Jesus to have publicly presented himself alive to Israel after his public execution by the Romans. The desire for stasis against the Romans, that the leaders had hoped to avoid by removing Jesus from the scene, would have been more difficult to resist.

Jesus couldn’t present himself alive to Israel without entailing a high risk of provoking the very war he had been warning against (and, perhaps, that he died — as Israel’s king — to delay). Remaining dead in the thinking of the majority of the people was necessary to preserve the peace, at least for a while.

What Paul says in Romans 1:3-4 needs to be read carefully. There are two quite closely parallel statements:

… concerning his Son | the one having been | from seed of David | according to flesh,

This seems to me to make “from resurrection from the dead” rather like “from seed of David”—it designates his lineage, so to speak. He is not determined Son of God by his resurrection, but resurrection was the journey that he took to get there.

There’s a similar argument in Acts 2:30-36. Unlike David, Jesus was not abandoned to Hades but was raised up. He is then exalted and seated at the right hand of God, and this is what has made him Lord and Christ.

I would argue, therefore, that “vindication” is a legal notion: it is what happens before a judge—cf. the widow who seeks justice against her oppressor before a judge in Jesus’ parable. The resurrection of Jesus was not the moment of vindication or enthronement but a necessary condition for the decision of God on his behalf.

That goes someway towards answering your second question, I think. The central affirmation of the early church was that Jesus was Lord and would come as judge and ruler. From the point of view of the apostolic missions perhaps the resurrection had a subordinate status. Perhaps?

What does Luke’s account of Paul’s visit to Athens tell us about how to do “missional church”?
Not sure about the charts: please explain…
Kingdom of God and missional church: not as difficult to define as you might think
Defying history: the future of the church in a Third World Culture
The apocalyptic significance of Easter Week: suffering and kingdom
The apocalyptic significance of Easter Week: Jesus and the temple
Jesus and the judgment of the Watchers
What is the eschatological wisdom of God up to these days?
END_OF_DOCUMENT_TOKEN_TO_BE_REPLACED