peter wilkinson: I was just reading Ian Paul…
Andrew: Many thanks for this, Tim…
Andrew: I don’t have much to add to…
Phil L.: Hi Tim, I’m not trying to…
Tim Peebles: Good and helpful post,…
END_OF_DOCUMENT_TOKEN_TO_BE_REPLACED 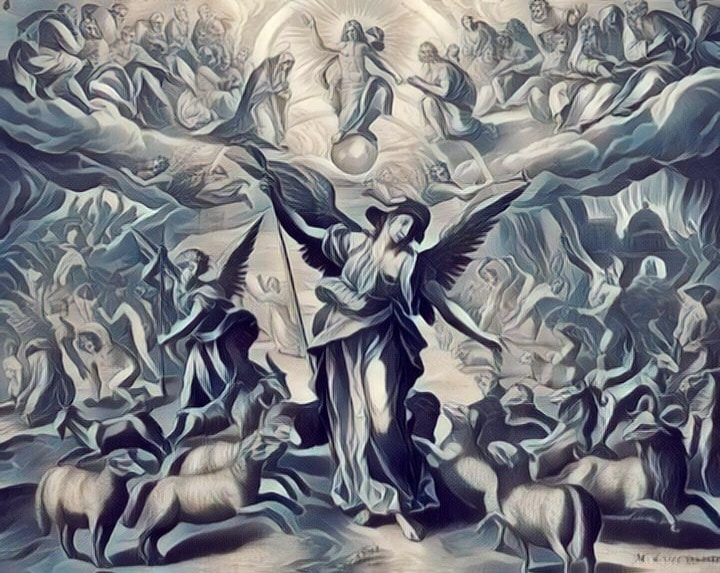 Ian Paul has written a good piece on the sheep and goats passage in Matthew 25. He notes, rightly in my view, that the “least of these” are not the poor in general, and that it is not good Christians and bad non-Christians who are separated at the judgment. He stresses the relevance of Daniel’s vision of “one like a son of man,” who is given authority to act as judge. He also has some interesting things to say about the reasons for separating sheep from goats. But I don’t think he takes the context seriously enough, and the reader is still left wondering what the passage is supposed to teach us about the criteria for judgment. “If my Muslim friend helps me out are they counted as sheep?”

The mission of the disciples

The passage comes at the end of a section of teaching about the responsibilities of the disciples in the period of time that will end with the parousia (Matt. 24:36-25:30). We should go back, in fact, to Jesus’ assertion that the sign of the Son of Man will appear in heaven and that all the tribes of the earth (or of the land) will see him coming on the clouds of heaven. This certainly associates Jesus with Daniel’s “one like a son of man” (Dan. 7:13-14), but I think that this figure is probably now coming from the throne of God, having some time back received glory, kingdom, and authority to act as judge in the manner depicted.

The purpose of the “coming” at this point is quite narrowly defined. It is to gather the elect from across the earth. The burden of the body of teaching that follows is 1) that the disciples must stay alert, because the thief breaks in when everyone is asleep, the master returns when no one is expecting him (Matt. 24:43-44); and 2) that they will be judged according to how well they have carried out their responsibilities in the meantime, either by inclusion in the kingdom of heaven or by exclusion from it: the foolish girls are refused entry to the marriage feast (Matt. 25:1-13); the unproductive servant is thrown out of the household (Matt. 25:14-30).

The other crucial point to note is that Jesus expected the climactic moment to arrive before the current generation of Israel passed away (Matt. 24:34). The parousia of the Son of Man and the gathering and assessment of the disciples cannot be separated from the calamity of the war against Rome and the destruction of Jerusalem and the temple.

So Jesus has in mind a relatively short span of time—indeed, he makes the point that the period of tribulation caused by the war and siege of Jerusalem would be cut short for the sake of the “elect”—that is, those whom he has chosen to bear witness to him (Matt. 24:22). It would reach its devastating climax within the lifetime of at least some of his disciples (Matt. 16:28); and it is presented in the parables of Matthew 25 as the prelude to something bigger and more enduring.

It is like the period of waiting for the bridegroom to arrive, but a marriage feast is the beginning of something, not the end. The faithful servant who goes (poreutheis) and gets a good return on the small amount of money entrusted to him will be given much greater responsibilities in the age to come: “Well done, good and faithful servant. You have been faithful over a little; I will set you over much. Enter into the joy of your master” (Matt 25:21, 23).

The parousia is the end of a limited period of turmoil and the beginning of something much more substantial.

So what exactly did Jesus expect his disciples to be doing during this period of 30 to 40 years? They are given their commission in Galilee after the resurrection. The risen Jesus declares that he has now been given “all authority in heaven and on earth,” and he therefore tells them to “Go (poreuthentes) …and make disciples of all nations, baptizing them in the name of the Father and of the Son and of the Holy Spirit, teaching them to observe all that I have commanded you” (Matt. 28:19–20).

The object of the exercise, therefore, was that there would be people among the nations who would observe everything that Jesus had commanded his disciples. It is not made clear whether this would include Gentiles. In any case, what Jesus had commanded was really quite limited in scope. He had taught his followers how to live as a prophetic-missionary community of the coming intervention of God and renewal of Israel, under extremely difficult conditions.

Those who became disciples, therefore, as a result of this time-limited mission among the nations, were baptised in the name of the Father who would act in history in order that his name might be hallowed among the nations, of the Son who had been given authority to judge and rule, and of the Spirit by whom their witness in the face of severe opposition would be empowered (cf. Matt. 10:20). Here we have the basis, incidentally, for an apocalyptic trinitarianism.

Jesus concludes with the assurance that he will be with them, as they go about their mission, until the end of the age.

This gives us the solid narrative frame for making sense of the separation of the nations into two categories. The only post-resurrection future envisaged for the disciples by Jesus in Matthew’s account is the work of proclamation, baptism, and instruction among the nations as part of their eschatological witness to the coming intervention of God to put things right at the end of the age of second temple Judaism.

The judgment of the nations

We are now in a position to make good sense of the account of the judgment of the nations when the “Son of Man comes in his glory and all his angels with him” and sits on the “throne of his glory” (Matt. 25:31).

Whoever receives you receives me, and whoever receives me receives him who sent me. … And whoever gives one of these little ones even a cup of cold water because he is a disciple, truly, I say to you, he will by no means lose his reward. (Matt. 10:40, 42)

The end of the age of second temple Judaism

What is described in Matthew 25:31-46, therefore, is not a “final” judgment. It belongs to the vindication of the persecuted envoys of Jesus at the conclusion to their mission to the nations. At the end of the age of second temple Judaism the God of Israel would establish a new political-religious order for his people under Jesus, who would rule with those disciples (cf. Matt. 19:28) who had faithfully proclaimed the coming kingdom-of-heaven event in Judea and among the nations.

Righteous Gentiles who were sufficiently impressed by the eschatological proclamation to care for the needs of the messengers would be included in this new political-religious order. Those in the Greek-Roman world who did not take the disciples seriously and were indifferent to their suffering would be excluded.

Finally, we have to accept, I think, that this passage is not directly relevant for the church today. It has to be read as an inseparable part of the story of what God was doing in the ancient world to ensure that his name was hallowed among the nations and that his will was done on earth (cf. Matt. 6:9-10). There are lessons to be learnt from it, no doubt, about mission and the relation of the church to wider society, but the question of whether or how the modern church will be vindicated—found to be in the right—belongs to a quite different narrative.

Did you like what you just read?
Related content
An instructive parallel to the sheep and goats judgment
The judgment of the sheep and the goats
My arguments against Ortlund’s restatement of Packer’s arguments against annihilationism
Did Jesus believe that Gentiles would be included in the renewed people of God?
If you enjoyed reading this post, why not share it with associates, friends, and loved ones?

So also my heavenly Father will do to every one of you: the parable of the unforgiving slave
What will happen to the lost sheep who take offence at being found?
When should we expect a day of the Lord?
The narrative architecture of Jesus’ apocalyptic discourse in Mark 13

Do we have two “ends” in Jesus’ apocalyptic discourse in Mark?

The difference between “kingdom of God” and “shalom”

How do we measure the effectiveness of the missional church? Part 1

How do we measure the effectiveness of the missional church? Part 2

The narrative-historical reading of the New Testament: what’s in it for me? Part 1