Keith Wansbrough: Looks good now, thanks. The…
Andrew: Thanks, Keith. It was…
Keith Wansbrough: The chart didn’t appear for…
Juanita: Hi there Sam We spoke…
Andrew: David, many thanks for this…
END_OF_DOCUMENT_TOKEN_TO_BE_REPLACED

Cleanthes’ “Hymn to Zeus” and the renewal of monotheism (3 comments)
Conversation with Mike Bird about In the Form of a God (0 comments)
Answering Mike Bird about the referent of "all things" in 1 Corinthians 8:6 (0 comments)
Interview: The Preexistence of Christ and Narrative Historical Theology (1 comment)
END_OF_DOCUMENT_TOKEN_TO_BE_REPLACED

Why the outpouring of the Spirit on the day of Pentecost marked an end, not a beginning 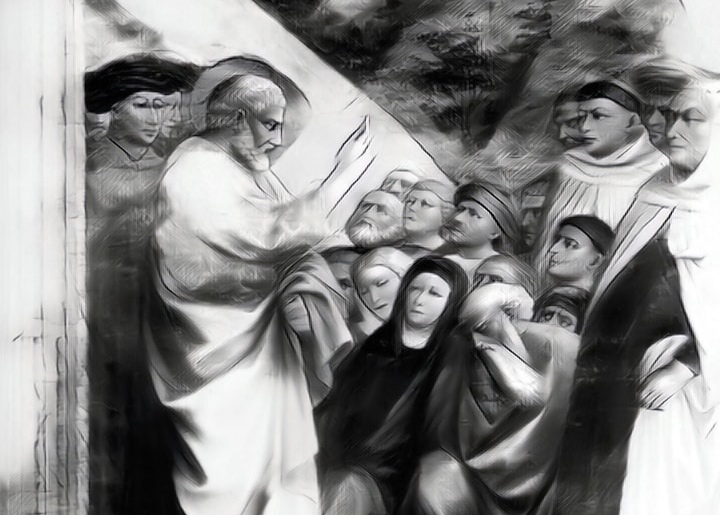 One of the reasons why we routinely miss the point of Peter’s explanation of what happened on the day of Pentecost is, I think, that the canonical arrangement of books encourages us to read Acts as the beginning of something new rather than as a direct continuation of what went before. The New Testament opens with four Gospels telling the story of the life of Jesus up to his death and resurrection. Then we have Acts as the first book dealing with the emergence of the early church and its spread, setting us up for all those letters and the book of Revelation. The ascension of Jesus brings one phase to an end; the outpouring of the Spirit inaugurates the age of the church with fireworks and great fanfare.

The rupture between the story of Jesus and the story of the church is made worse by the fact that the last of the Gospels is John, which has almost nothing of the pervasive apocalyptic outlook of the Synoptic Gospels. Even if we are not actually reading through the New Testament, starting at the beginning, at the back of our minds the thought is lurking that John’s elaborate theological reworking of the story of the historical Jesus has interrupted or reset the narrative. Now for something new. So when we start reading Acts, we make little effort to pick up where Matthew, Mark, and most importantly Luke left off. I think that is a mistake.

The fate of Jerusalem

Lots of things happen along the way—people are healed, stories are told, instructions are given. But what I will draw out here is a prominent and persistent theme that I think is crucial for understanding not only what will happen to Jesus when he gets to Jerusalem but also Peter’s speech on the day of Pentecost a few weeks later.

This is specifically an empowering of Jewish followers of Jesus with the Spirit of Jesus to carry on the mission of Jesus to Israel.

So when the two disciples on the road to Emmaus say that they had hoped Jesus was the one to redeem Israel, we must understand it as redemption from the long history of rebellion and disobedience that now made war, devastation, and dispersion more or less inevitable. The question is resumed at the beginning of Acts when the disciples ask the risen Jesus whether at this time he will restore political independence to Israel (Acts 1:6). Presumably the timing of this restoration is something that not even the Son knows (cf. Matt. 24:36; Mk. 13:32). But their responsibility in the meantime is clear enough. It is to bear witness to the exaltation of Jesus and his future rule, in the power of the Spirit, both in Jerusalem and among the nations (Lk. 24:45-49; Acts 1:8).

The day of Pentecost

Peter directly addresses the “Men of Judea and all who dwell in Jerusalem,” who had gathered to find out what all the commotion was about (Acts 2:14). He relates the outpouring of the Spirit to a passage in Joel, which speaks of God pouring out his Spirit on “all flesh” in Israel, so that “your sons and your daughters shall prophesy, and your young men shall see visions, and your old men shall dream dreams” (Acts 2:17; cf. Joel 2:28-31). Non-Jews are not in view.

This is the Spirit of prophecy, and what this newly birthed prophetic community will “see” and proclaim is “wonders in the heavens above and signs on the earth below, blood, and fire, and vapour of smoke; the sun shall be turned to darkness and the moon to blood, before the day of the Lord comes, the great and magnificent day” (Acts 2:19–20).

This is the standard symbolic language of judgment against a city or nation, and the reader is reminded of Jesus’ own prophetic statement that at the time of the fall of Jerusalem there will be “signs in sun and moon and stars, and on the earth distress of nations in perplexity because of the roaring of the sea and the waves” (Luke 21:25; cf. Matt. 24:29; Mk. 13:24-25).

So what is Peter getting at? He is saying that the Spirit of the prophet Jesus (cf. Lk. 24:49) has now been given indiscriminately to all in the band of disciples—men and women, young and old—so that they all now see with clarity what Jesus saw and can proclaim with boldness to Israel what Jesus proclaimed. This is specifically an empowering of Jewish followers of Jesus with the Spirit of Jesus to carry on the mission of Jesus to Israel.

The witness to the sufferings of the Christ and his resurrection from the dead (Acts 2:22-24; cf. Lk. 24:45-49) does not stand alone; it is not all that needs to be said. It is presented in Peter’s speech as an integral part of the apocalyptic narrative that I highlighted in Luke’s Gospel. The death and resurrection of Jesus mattered because a “day of the Lord” was coming that would spell disaster for Jerusalem. But also the resurrection is itself only a means to an end. God raised Jesus from the dead in order that he might be seated at his right hand, as Lord and Christ, to rule in the midst of his enemies (Acts 2:33-36).

In view of this, there is no other way to escape the catastrophe that will soon engulf this “wicked generation” of Judeans than to repent, call on the name of this risen Lord, be baptised for the forgiveness of sins, and receive the same Spirit of eschatological renewal.

The Pentecost experience was not the beginning of the church and its mission to bring personal salvation to the world. It was the continuation and expansion of Jesus’ prophetic mission to the current generation of Judeans and above all to the leadership in Jerusalem. What the apostles set in motion was a popular movement of repentance, a religiously inspired revolt against the “lawlessness” that defied the working of God and brought about the crucifixion of his servant Jesus (Acts 2:23). The Pentecost vision takes us up to the great and terrible day of God’s judgment against Israel—the decisive end of the second temple existence of his people. Peter does not attempt to describe the future life of the “survivors” who call upon the name of the Lord (Joel 2:32).

This is all evident in Luke’s telling of the story in Acts 2, but it helps to remember what went before.

Thank you, Andrew; this is helpful. I especially appreciate the emphasis that the apostolic mission was not fundamentally changed after Pentecost; they were continuing Jesus’ mission to Israel.

I do question this bit:

So when the two disciples on the road to Emmaus say that they had hoped Jesus was the one to redeem Israel, we must understand it as redemption from the long history of rebellion and disobedience that now made war, devastation, and dispersion more or less inevitable.

Are you saying that we must we interpret the Emmaus road disciples’ thinking in this way? I question that. The Synoptic gospels seem pretty clear that the apostles did not understand Jesus’ thinking about his mission; would ‘line worker’ disciples have had a clearer understanding?  It seems to me more likely that these disciples were of like temper with the people who were looking for a king to lead them against the Romans in an “arm of the flesh” redemption of Israel through a war, the very war that Jesus warned against (this is surely implied in the people’s preference for Barabbas, the insurrectionist, over Jesus the captured and failed king). The Emmaus road disciples might even have been sympathizers with the uprising that seems to have taken place in Jerusalem around the time of Jesus’ arrival; the failure of that uprising — which if successful could have delivered the city to its newly arrived king — would have added to the disappointment.

That Israel needed this kind of redemption (rescue from, among other things, its preferred “arm of the flesh” approach to its relationship with the pagan overlords) is IMO true, but I think that’s a “God’s eye view” of the situation. Jesus saw it this way (and IMO it informed his thinking about the necessity of the Cross as the means of crushing Judean militancy for a generation), and narrative historical interpreters see it, but did the Emmaus road disciples see it?

I wonder if there wasn’t a third option—neither crucifixion not insurrection.

Jesus and his disciples warned of all that was at hand, and a thousand years into the future, preachers will still be calling on their congregations to get ready because of all that scripture warns is “at hand”.

The church believes it will lose all credibility and relevance if it doesn’t keep redefining the phrase “at hand,” and I suspect that’s true.

Cleanthes’ “Hymn to Zeus” and the renewal of monotheism
Conversation with Mike Bird about In the Form of a God
Answering Mike Bird about the referent of "all things" in 1 Corinthians 8:6
Interview: The Preexistence of Christ and Narrative Historical Theology
How we got from kingdom to Trinity: Constantine and pagan monotheism
Jesus and Paul, works and faith
Some hazardous thoughts on the Trinity for a new year and a new era
Was it Roman custom for people to return to their home town for a census?
END_OF_DOCUMENT_TOKEN_TO_BE_REPLACED