David: And, for further reading, I…
David: There’s a substance to this…
Arthur Davis: That, I think, is the…
Jason Coates: Andrew, whenever the Great…
Andrew: Some good thoughts, thanks…
END_OF_DOCUMENT_TOKEN_TO_BE_REPLACED

Answering Mike Bird about the referent of "all things" in 1 Corinthians 8:6 (0 comments)
Interview: The Preexistence of Christ and Narrative Historical Theology (0 comments)
How we got from kingdom to Trinity: Constantine and pagan monotheism (2 comments)
Jesus and Paul, works and faith (0 comments)
END_OF_DOCUMENT_TOKEN_TO_BE_REPLACED 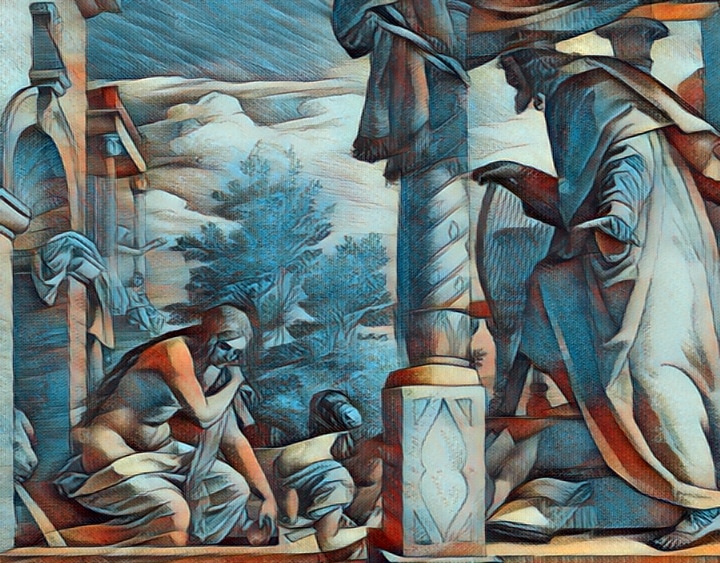 James McGrath made this comment in response to my treatment of Bathsheba’s bathing in my previous two posts (see the links below):

I found myself unable to keep reading after you blamed Bathsheba for washing herself after the end of her menstruation as the Law mandates, in a place that should have been private, because according to you she knew the king did not march out with his fighting men, had a vantage point to leer inappropriately, and she knew he would do so and… what?

I take James’ work very seriously, so I am a bit put out by this. (Actually, I take all comments seriously. It doesn’t take much to put me out.) But I don’t think that’s how I presented the matter. My argument has been that this is not about blaming Bathsheba for seduction but about tracing a storyline that culminates in the enthronement of Solomon. I have used the word “opportunist,” but I think now a more helpful way to talk about motives and morality is to consider the perspective of the narrator. We have no access to the subjectivity of the principal actors other than through the carefully controlled storytelling of someone whose concerns were far removed from those of modern readers. I don’t think it helps to make this a morality tale for the #MeToo generation.

As I said before, we don’t need David to have raped Bathsheba in order to condemn the exploitation of women by powerful men—or, for that matter, in order to offer a post-patriarchal critique of ancient social-sexual mores. So I think it’s important not to foist a modern agenda on to the story when it appears that the narrator’s interests lay somewhere else. Many of the “readings” I have seen recently sound as though people thought they had read it, in lurid detail, in the press last week.

The narrator clearly looks at the incident from the longer perspective of a prophetic interest in the political complexities of the succession, though I am aware that there are some literary-critical questions about the process by which the Bathsheba-Solomon cycle of stories came together.

From his point of view, two issues dominate the narrative.

The first is David’s sin in having Uriah killed and taking his wife when God had already given him the wives of Saul. If he wanted more, he could have asked for them (2 Sam 12:8). The punishment for his high-handed action is that the sword will not leave David’s house and another man will take his wives (2 Sam. 12:10-12; cf. 16:20-23). Bathsheba was a cherished possession wrongly taken by the king, therefore the king will suffer the wrongful misappropriation of his own possessions.

At no point, as far as I can tell, is David accused of or criticised for having forcefully brought Bathsheba to the palace in the first place. Not a word is said in defence of a violated Bathsheba. There is nothing to suggest that she was humiliated or degraded by the encounter. There is no hint of the outrage expressed shortly after over the rape of Tamar. What we appear to have in 2 Samuel 11:2-5 is a discreetly managed and not entirely one-sided royal affair: she was brought but she also “came to him,” which is a remarkable insertion; he sent messengers to her, and she sent word to him to let him know that she was pregnant.

The second issue is that Bathsheba’s son, Solomon, who is perhaps a “replacement” for the child that died, will become king in keeping with a promise made by David to Bathsheba (1 Kings 1:13, 30). At this stage she becomes a significant and resourceful actor, supported by the prophet Nathan, in the interest of her son.

It seems to me, then, that the details of Bathsheba’s bathing need to be evaluated in light of the narrator’s overriding concerns.

I pointed out in the second post that on the two other occasions when a woman bathes (rachatz) in the Old Testament (Ruth 3:3; Ezek. 23:40), it is explicitly in preparation for a romantic or sexual encounter with a man. Bathsheba could be bathing in all innocence, to be sure—we are told nothing about her motivation; but the narrator may intentionally have put the thought in the reader’s mind that this is a prelude to a sexual liaison. In that respect, it is significant that we don’t get the explanation for her bathing—ritual cleansing after menstruation—until a few lines later.

Commentators seem to think that we are told about her purification from uncleanness immediately after David “lay with her” (2 Sam. 11:4) in order to make it clear that it would be David’s child, not Uriah’s. But it also introduces into the narrative (it’s the narrator’s comment, not Bathsheba’s) the idea that she was ready to conceive, and so the reader is now thinking that her bathing was also implicitly a signal that she was in oestrus. So the latent intentionality in the narrative is not that she was bathing in order to seduce but that she was bathing in order to conceive—because the narrator is taking the story in the direction of the crisis that will result in the succession of Solomon.

What I think also becomes relevant here is that it was not David’s purpose to have a son by Bathsheba. He had plenty of male offspring already, so plan A is to get Uriah to own the baby, and the affair will be passed over quietly. When that fails, he resorts to the fateful plan B. The fact that the narrator highlights her fertility, therefore, is determined by a succession narrative in which Bathsheba, perhaps with help from Nathan, plays a significant and proactive role. We are not given the details, but these are the dots that need to be joined. The otherwise gratuitous purification remark makes sense only if it highlights Bathsheba’s long term interest as a mother in the course of events.

So I don’t think that such a reading of the Bathsheba stories amounts to blaming her for the affair. It is not about sex or seduction or enticement or lust; it’s about succession, and it’s possible that the narrator traces Bathsheba’s powerful role in that story all the way back to the beginning, if only implicitly—with dramatic irony, so to speak.

I agree that there are “power dynamics” at work which make the relationship between David and Bathsheba an unequal one, which put her in a weaker position; but I do not see that the narrator characterises the encounter as anything like rape. Perhaps he is suppressing something to protect reputations, but he has no qualms about condemning David’s treatment of Uriah and Amnon’s violence against Tamar. If it was a rape, why isn’t it presented as a rape? We cannot assume that every sexual encounter between a king and a beautiful woman living in proximity to the palace is coercive.

Related content
Did David rape Bathsheba?
Further notes on David and Bathsheba
The narrative vocabulary of rape in the Old Testament and the counter-example of Amnon and Tamar

Great article, very inciteful. I wanted to ask, if the narrative’s intention to is present Bathsheba as “bathing in order to conceive”, then does this not imply she was looking to conceive with someone besides her husband Uriah? The narrative is clear, he is away fighting, and even when he returns, he would not have sex with her, so who, narratively, is she looking to procreate with? If not with David, then the implication may be that she was looking to commit adultery with someone.

Thank you, David. I’m not expecting many people to agree with me on this matter on past showing.

Again, it’s necessary to differentiate between what the “real” Bathsheba or even the literary Bathsheba might have had in mind and what the narrator wants his readers to pick up as the story develops. But if conception is the latent intent of 2 Samuel 11:2-5, then the father would have to be David. It’s not odd that David was on the roof—it’s a normal place to sleep in a hot country; and given Uriah’s prominence in the court, it’s likely that Bathsheba would have known that David had not gone to fight. So the narrator has set the circumstances up in such a way as to give space for that “latent intent.” But he does not ascribe any motive to his protagonist.

I appreciate that you took the time to respond, but you won’t be surprised that I’m unsatisfied. Since David did not go to Bathsheba, there was no question that she would have to go with the men that he sent. There is no indication in the text that the men who went to get her told her why they had come. She may have thought that her husband had been killed in battle and she was being called to receive the news. We can always speculate.

You agree that by ancient standards David stole another man’s property. No one disagrees that ancient Israelites did not have the terminology of rape and to the extent they envisaged it, the offense was against either the father or the husband of the woman depending on the marital status.

You seem willing to use the anachronistic category of rape in reference to the story of Tamar. The question is why not here. Where in the story is Bathsheba complicit? Where is she willing? Where does she give consent? If she does not, then by our standards if not those of the ancient Israelites, this falls into the category of rape. If you believe that she does consent, then you most certainly are blaming her.

Some hazardous thoughts on the Trinity for a new year and a new era
Why did Jesus instruct his disciples not to preach the kingdom of God to Gentiles and Samaritans?
Why did the Jews accuse Jesus of making himself equal to God?
Answering Mike Bird about the referent of "all things" in 1 Corinthians 8:6
Do the disciples pray to the Lord Jesus in Acts?

Answering Mike Bird about the referent of "all things" in 1 Corinthians 8:6
Interview: The Preexistence of Christ and Narrative Historical Theology
How we got from kingdom to Trinity: Constantine and pagan monotheism
Jesus and Paul, works and faith
Some hazardous thoughts on the Trinity for a new year and a new era
Was it Roman custom for people to return to their home town for a census?
A Hindu asks a very good question about the death of Jesus and the salvation of Gentiles
What do the Christmas stories tell us about the pre-existence of Jesus?
END_OF_DOCUMENT_TOKEN_TO_BE_REPLACED