Andrew: That would take a bit of…
Peter: I’m curious about whether or…
Andrew: Good question. Answered here…
James J Mercer: Given that death is/will be…
Andrew: Haven’t we had this…
END_OF_DOCUMENT_TOKEN_TO_BE_REPLACED

Whose names are written in the book of life? (2 comments)
How “liberal” is the narrative-historical method? (8 comments)
Katherine Shaner on the danger of singular saviours (2 comments)
In the likeness of sinful flesh: some reflections for Holy Week (4 comments)
END_OF_DOCUMENT_TOKEN_TO_BE_REPLACED

Creation, fall, redemption, and new creation is not much of a metanarrative

I came across this somewhat at random, but it illustrates a point. In an article on the role of theology on the Gordon Conwell website John Jefferson argues that a sound biblical theology is like the backbone in the human body—it provides “support, shape and stability to the Body of Christ”.

In the early church this was expressed through four functions: catechesis, or the teaching of basic Christian doctrine; apologetics, the defence of the faith; polemics, the suppression of heresy; and homiletics—“assisting preachers and teachers in the exposition and teaching of Scripture”.

Jefferson then goes on to suggest that a sound biblical theology “can provide vitality, vision and standards for assessment in the local congregation”. The framework for vision is provided by the “biblical metanarrative of creation, fall, redemption and new creation”, and the point is made that salvation is not just about forgiveness of sins and the hope of heaven but also about an “experience beginning now of entering into the life of the Triune God”.

Because of Jesus’ incarnation, death, resurrection, ascension to the right hand of the Father and sending of the Holy Spirit, we—as adopted sons and daughters in Christ—can begin to experience the love of Jesus’ Father for his beloved Son, in the communion of the Holy Spirit, looking forward to its culmination and never-ending deepening in the presence of God in a gloriously beautiful New Creation (Rev. 21, 22).

This strikes me as a classic statement of modern evangelical orthodoxy, revised only in two respects: the end point—the eschaton, the terminus ad quem—is not heaven but new creation; and the fashionable “metanarrative” label has been slapped on the package.

These cosmetic improvements aside, what we have is the sort of theology represented by the old altarpieces, such as the Redemption Triptych of Vrancke van der Stockt, which I came across in the Prado recently. 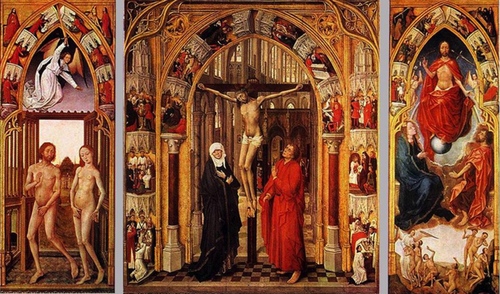 In this schema we go from fall to final judgment, rather than from creation to new creation, but the fundamental problem is the same: the redemptive event is left stranded as a metaphysical abstraction somewhere between the “myth” of human beginnings and the “myth” of final judgment.

The “metanarrative” of creation, fall, redemption and new creation sounds cosmic in its reach, but in practice it is no more than the inflated container for the personal narrative of sin and redemption. On the one hand, there is no narrative of Israel in Jefferson’s account and therefore no historical or theological grounding for redemption. On the other, there is no narrative of the church: Christianity is just a big playground where we run around—boys and girls, sons and daughters—happily experiencing the love of God until the end of time.

It is clear from the article that even when it wants to talk about vitality and vision, modern evangelicalism entirely lacks the theological resources to grasp this dimension of the church’s existence. This is a very static, conservative, unadventurous, and in my view complacent model of the place of theology in the life of the church.

[pullquote]Modern evangelicalism has an eschatology, but it is functionally useless.[/pullquote] New Testament theology was eschatologically oriented because it had to enable the early churches to negotiate effectively the historical crises that were bearing down on them—not fantasy end-times tribulation but the real hardship and suffering that the churches would have to endure if their God was ultimately to be vindicated, justified, in the pagan world. They were not in a playground. They were in a war zone.

It seems to me that the church in the West today needs to recover something of that eschatological urgency and ambition. A sound biblical theology should do more than provide structure, shape and stability. It should generate the narrative by which we make sense of our place in the scheme of things—not somewhere vaguely between creation and new creation but here in the twenty-first century, as we struggle to justify our existence in the face of an all-powerful, all-meaningful, all-consuming secular materialism.

Ironically, Jefferson thinks that the theological vision of new creation “can energize and unify a congregation” in the way that Kennedy’s vision of “A man on the moon by the end of this decade” back in 1961 energized NASA for the Apollo mission. But a theological vision that has its sights set on new creation cannot inspire the sort of historical—and political—urgency that put a man on the moon. The final hope is important, but it is not a substitute for the hopeful and difficult engagement with the living God in history.

First, I sent a link to your post on the gospel to some friends and it generated a lot of good discussion. Thanks for taking the time to post your ideas.

Here’s my question, what type of narrative do you think your approach may generate?

Thanks, Chris. I’m hoping that the second part on church as eschatological community will take at least a small step towards answering your question. It might be interesting to attempt a concise narrative for the Western church similar to my message of the Bible in one sentence.

I once again, largely agree with your challenge to modern evangelicalism but am left wondering how this works in practice. The current wordlview works as a way to paste story onto the individualized, metaphysical and largely theraputic structure.  Accept Jesus as your personl savior so you can to to heaven, I mean New Creation, when you die and in the meantime here is how you can fix your problems by reading the Bible. Theology is a way to defend this worldview from encroaching liberalism. While this appeals to some, it increasingly seems flat and disconnected for a great many.

If we adopt the narrative-historical approach how does that change what happens on Sunday, how churches see and understand themeselves, what community engagement looks like, etc.

Patiently awaiting The Church As An Eschatological Community Part 2 …

This is a very static, conservative, unadventurous, and in my view complacent model of the place of theology in the life of the church.

It sounds like it, doesn’t it? Maybe the theology suggested by the Prado triptych (did that reflect ”modern evangelicalism” too?) was designed at a time when for most people, life was “nasty, brutish and short”. I think the length of your life-span, and the freedom or lack of it to make choices, may have a bearing on how adventurous or otherwise your theology is perceived to be. But is the theology so suggested really as you describe it?

A contrary question might also be asked: what is the use of a theology which attaches itself to “historical events—exodus, war, exile, invasion, diaspora, the fall and rise of civilizations”, without the life-changing consequences of a “personal narrative of sin and redemption”? (I note too the classic confusion of “personal” with “individual”). Is this really as narrow as you imply?  And if it led to  “just a big playground where we run around—boys and girls, sons and daughters—happily experiencing the love of God until the end of time”, I expect the average peasant of Vrancke van der Stockt’s time, let alone ours, would have been delighted.

In my pastoral role, I am encountering many weird and wonderful variations on a theme of so-called faith within the Christian community, such as a believer of many years I was talking to last night who is currently meditating on the words of Jesus in the gnostic gospel of Thomas. I can see the value of a “sound biblical theology  … like the backbone in the human body” if it leads to better spiritual disciplines than this.

It seems to me that it’s not “modern evangelicalism” that is the problem, but something like “postmodern theological disengagement” which invites anything and everything onto the faith agenda.  The backbone was designed for action, to enable the body to live creatively and adventurously in the world, and cope with heavy loads. From my vantage point, I’m seeing increasingly how the one is designed to support other, but there will always be the option of fascinating yet fruitless detours in whatever system you choose to operate in.

A contrary question might also be asked: what is the use of a theology which attaches itself to “historical events—exodus, war, exile, invasion, diaspora, the fall and rise of civilizations”, without the life-changing consequences of a “personal narrative of sin and redemption”?

I suppose definitions might be in order…if by “new creation” you are simply meaning “new earth” you might have a point…but what if the narrative is grander than just land made whole again? I get a sense (maybe assuming to much) that you see the church as a great and grand machine to change the world, but I find a conspicuous absence of a temple in the New Jerusalem…the church as I undertsand eschatology is scaffolding unto the real thing comes down, which makes it temporary at best.

Perhaps a larger problem with the meta narrative is we are trying to extend somethign beyond its viable usefulness. The new creation as I am understanding it contains a bigger narrative and that is the mysterion of Christ in you th e hope of glory, not the “church using you the hope of transforming history”

your mileage may vary of course.

I don’t see the church as necessarily a “great and grand machine to change the world”. That was probably the case with the first century churches and the world as they saw it—they were the instrument by which God overthrew idolatrous pagan empire. But I agree, there is a sense in which the church is scaffolding until the real thing comes. That makes it temporary in principle, but as far as scripture is concerned the temporary is mostly what it’s all about.

I’m not entirely clear what you’re getting at in the second paragraph. My argument is that “Christ in you, the hope of glory” (Col. 1:27) has reference to the vindication of the churches in the pagan world—therefore, a smaller narrative than the new creation one.