toddh: Very interesting, that…
Andrew: Agreed. We may not be able…
davo: It is not clear that Adam…
Samuel Conner: Thank you, Andrew. I must…
Spring blossom : Luke 4:17 The scroll of the…
END_OF_DOCUMENT_TOKEN_TO_BE_REPLACED

How to pray the prayer of Jabez (0 comments)
Falling sideways: why not much changed when Adam and Eve sinned (3 comments)
How did Jesus’ disciples imagine that he would “redeem Israel”? (18 comments)
Why the outpouring of the Spirit on the day of Pentecost marked an end, not a beginning (3 comments)
END_OF_DOCUMENT_TOKEN_TO_BE_REPLACED

I gave a talk last night at Community Church Harlesden on church as eschatological community. It was a little complicated, as you can see from this handout, so I promised to write up a summary. I'll do it in two parts. If you're not sure what "eschatology" means—or at least, what I mean by "eschatology"—see this article. 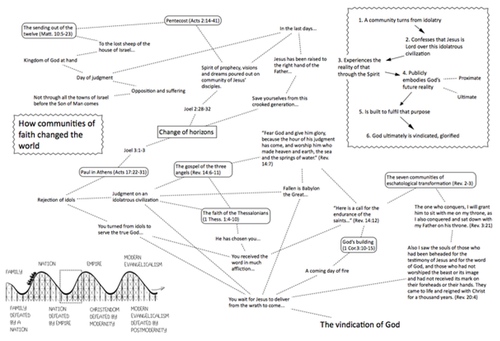 My argument, basically, was that what we get in the New Testament is not a universal or standard or timeless definition of what church should be and do. What we get is an account of how communities were called to bear faithful witness to God's future under the particular historical conditions of eschatological crisis—first in Israel itself, then throughout the Greek-Roman world. In other words, the churches of the New Testament understood themselves to be engaged in a narrative, which had a past, a present, and most importantly a future. They had a thoroughly apocalyptic outlook. The western church has no sense of being part of a narrative, other than the annual cyclical narrative of Christmas, Easter and Pentecost, which goes nowhere. We go from week to week, sermon series to sermon series, year to year, but there is no big, engrossing, inspiring, shaping narrative.

Ask the church in Pakistan

To begin with, I mentioned a conversation I had with a Pakistani Christian friend over lunch last Sunday at Westbourne Grove about the challenge of narrative-historical or New Perspective readings of the New Testament and the state of the churches in Pakistan. The point I put to him was that if we are going to read the New Testament as primarily a story of judgment and vindication at the national or political level—as the story of how the family of Abraham survived judgment and inherited the world (cf. Rom. 4:13)—perhaps we should also assess the state of the churches in Pakistan in similar narrative terms. He agreed.

According to the modern evangelical paradigm, which is as influential in Pakistan, frankly, as it is in the West, the "gospel" that drives mission is the offer of personal salvation and transformation. Church is little more than a corollary to this programme. But suppose we do what the New Testament does and begin not with the personal narrative but with the community narrative—how will things then appear?

I suggested that two different—and very difficult—issues will push their way to the front of the queue for our attention. First, how will the Christian community in Pakistan survive in such an inhospitable environment? Secondly, what sort of hope might the Christian community embody in its social existence for the future of Pakistan?

From a biblical perspective these are fundamentally eschatological questions. A community of believers is brought into existence for the sake of God's future. How does it survive the current or impending crisis? How does it live out, represent, be a sign of, anticipate an alternative future reality for the sake of the world around it?

I have made the point before that the story of the people of God can be viewed as a roller coaster ride of highs and lows, success and failure, stability and crisis—a ride that carried on right through the New Testament period into the history of the church. 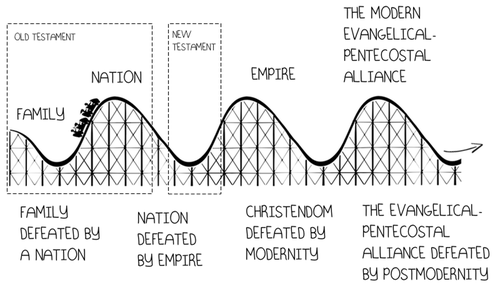 The family of Abraham is defeated by the nation of Egypt. The people go through the crisis of the exodus and become a nation. They fail as a nation. They are defeated by empires—the Babylonians, the Greeks, the Romans. They go through the long, drawn out crisis of exile, subjugation and war, from which they are saved as a people only by the faithfulness of Jesus. God defeats paganism. His people become an empire, they become European Christendom. But Christendom is eventually defeated, not by a greater geo-political power this time, but by modernity, by freedom of thought. The people of God responded to this defeat with a vigorous combined rearguard action of Pentecostalism and Evangelicalism, but this essentially modern movement is now being undermined—in the West, at least—by the indifference of post-modernity. We are again in a state of crisis and we are unsure of the future.

The part of this narrative covered by the New Testament is the crisis between God's people as nation and God's people as empire. It answers the question: how does the God of Israel come to confessed by the nations in the way envisaged by Isaiah:

Turn to me and be saved, all the ends of the earth! For I am God, and there is no other. By myself I have sworn; from my mouth has gone out in righteousness a word that shall not return: "To me every knee shall bow, every tongue shall swear allegiance." (Is. 45:22–23)

The story develops in two phases. First, there is the business of how God deals with the problem of his disobedient people. Secondly, there is what happens when the solution to that problem is proclaimed to the pagan nations. As Paul explains in Romans 15:8-12, Christ has become a servant to the Jews, this has been told to the Gentiles, who praise God for his mercy towards his people, and eventually Christ will rule over the nations. Central to both parts is the role played by communities of disciples or believers which are called to proclaim and embody in their life together God's future.

The disciples form an eschatological community within a pressing, restricted eschatological horizon (Matt. 10:5-23). They are sent only to the "lost sheep of the house of Israel". They proclaim that "the kingdom of God is at hand" and demonstrate the fact by healing the sick, raising the dead, cleansing lepers, and casting out demons. How the towns and villages of Israel respond to the preaching of the kingdom will determine how they fare in the coming judgment. The disciples will face opposition and persecution. They will "not have gone through all the towns of Israel before the Son of Man comes".

That was all by way of a test run. The mission of the eschatological community of Jesus' disciples gets under way in earnest on the day of Pentecost when the Spirit of prophecy, visions and dreams is poured out upon them (Acts 2:1-41). The Spirit is given in the "last days" of second temple Judaism so that all Israel, including diaspora Israel, will hear about the current "mighty works of God"—that is, they will hear that YHWH has raised his Son from the dead and given him authority to judge and rule at this right hand. Only those Jews who call on the name of the Lord Jesus will be saved from the coming destruction. Just as Jesus was empowered by the Spirit to bring about eschatological transformation, so the community of his followers has been empowered by the Spirit to bring about eschatological transformation.

In Joel the salvation of some in Jerusalem who call on the name of the Lord (Joel 2:30-32) is followed by God's judgment of the nations "on behalf of my people and my heritage israel" (Joel 3:1-3). This signals a change of horizons in the New Testament, from a coming judgment on Israel to a coming judgment on the pagan world.

Paul has the audacity to declare to the men of Athens that his God is bringing their civilization to an end: YHWH has raised his obedient Son from the dead and has appointed him as judge of the idolatrous empire (Acts 17:22-31).

We can get an idea of what this meant for the churches from 1 Thessalonians 1:4-10. They have been chosen by God for an eschatological purpose. They received the word in much affliction. Report of their faith has spread far and wide. They have turned their backs on the obsolescent, idolatrous culture of the Greeks "to serve the living and true God". They now wait for the Son who was raised from the dead, who will deliver them from the coming wrath of God against the old system.

The same connection between eschatological vision and community is found in Revelation. The three angels which John sees in Revelation 14:6-11 proclaim an "eternal gospel":

The "good news" is that the whole system of idolatrous pagan empire will be overthrown.

Fallen, fallen is Babylon the great, she who made all nations drink the wine of the passion of her sexual immorality. (Rev. 14:8)

This momentous announcement, however, is immediately followed by a "call for the endurance of the saints, those who keep the commandments of God and their faith in Jesus" (Rev. 14:12). If the eschatological goal is to be achieved the churches must remain obedient to their calling, even if it means suffering and death. So the promise is made to each of the seven churches that those who conquer, who remain faithful in the face of suffering and death, will share in the eschatological consummation.

To the church in Laodicea, for example, Jesus says to the one who conquers: "I will grant him to sit with me on my throne, as I also conquered and sat down with my Father on his throne" (Rev. 3:21). In John's apocalyptic narrative this  promise is fulfilled after the defeat of pagan Rome, when the martyrs are raised in a "first resurrection" to reign with Christ throughout the coming ages (Rev. 20:4-6).

If we put this, finally, in the terms of Paul's argument in Romans, it is through the obedient and faithful participation of such eschatological communities in the suffering and vindication of Jesus that the God of Israel shows himself to be right in the eyes of the nations.

Thank you for writing up this summary of your presentation, Andrew. For me, it is quite timely and I am looking forward to part 2.

Thanks for this. This is the sort of thing I was struggling to conceptualize — the impact on the church today of the narrative-historical perspective.  I haven’t had a chance to read your earlier books so I am really looking forward to the second part.

Well said. I reckon your approach to Scripture and the power of God is paying rich dividends. So much good perspective here, not least the final paragraph above. I just came across your material and I am looking forward to reading your next post.

How to pray the prayer of Jabez
Why did Jesus instruct his disciples not to preach the kingdom of God to Gentiles and Samaritans?
Falling sideways: why not much changed when Adam and Eve sinned
Why did the Jews accuse Jesus of making himself equal to God?
Why does Jesus give the kingdom back in the end and become subject again to God?