A question about the relation of my narrative-historical reading of New Testament eschatology to postmillennialism led me to the Wikipedia article (along with other fine resources), which has a simple diagram illustrating the four main species of millennialism. I’ve reproduced the diagram here with some small modifications and added a fifth (admittedly tongue-in-cheek) definition of my own.1 The white triangle gives a rough idea of where we are today in the timeline. The diagrams are not to scale and should not be used as a basis for investment decisions or the purchase of life insurance. 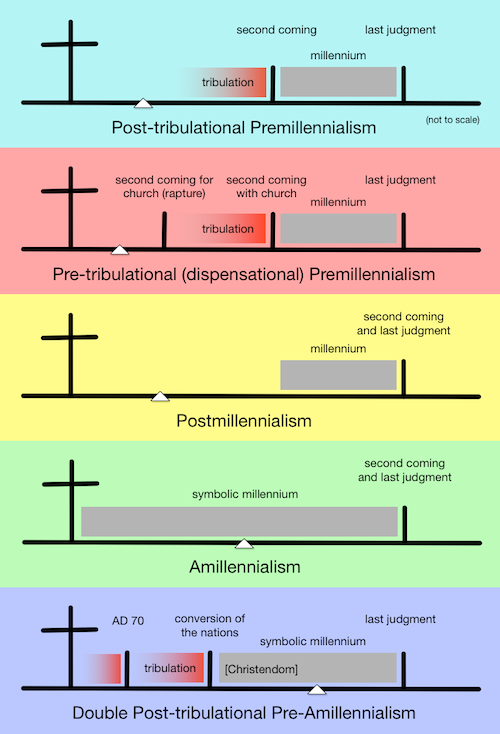 The various millennialisms are attempts to make sense of this passage in Revelation and to locate it in the larger New Testament account of what would happen in the future:

Then I saw an angel coming down from heaven, holding in his hand the key to the bottomless pit and a great chain. And he seized the dragon, that ancient serpent, who is the devil and Satan, and bound him for a thousand years, and threw him into the pit, and shut it and sealed it over him, so that he might not deceive the nations any longer, until the thousand years were ended. After that he must be released for a little while.

Then I saw thrones, and seated on them were those to whom the authority to judge was committed. Also I saw the souls of those who had been beheaded for the testimony of Jesus and for the word of God, and those who had not worshiped the beast or its image and had not received its mark on their foreheads or their hands. They came to life and reigned with Christ for a thousand years. The rest of the dead did not come to life until the thousand years were ended. This is the first resurrection. Blessed and holy is the one who shares in the first resurrection! Over such the second death has no power, but they will be priests of God and of Christ, and they will reign with him for a thousand years. (Rev. 20:1–6)

Premillennialism comes in two flavours. The basic idea is that Jesus will return bodily to earth to gather his followers and introduce a thousand year period of love, peace and happiness—so the second coming comes before the millennium. At the end of the thousand years there will be a general resurrection and final judgment.

The standard Post-tribulational Premillennial model (1) holds that a period of tribulation will precede the second coming or parousia, when the church will be caught up in the air to greet the returning Christ and accompany him back to earth. The Pre-tribulational (dispensational) Premillennial model (2) expects a first return of Christ to rapture the true church prior to a seven year period of global tribulation, followed by a second return with the church to inaugurate the millennium, by which outstanding Old Testament promises regarding Israel will be fulfilled.

Postmillennialism (3) puts a progressivist and optimistic spin on the doctrine. Through the preaching of the gospel and the practical work of the church the world will progress towards some form of ideal ethical-religious state, which will last for a thousand years. Some take this literally, others figuratively; some think it has already begun in a low-key sort of way; some expect everyone to be saved in the end. After the millennium Christ will return to wrap up history. Hagner writes:

Postmillennialists combined the liberal dream of a perfect society, brought about by the progress of science, technology, and human equality, with the theology of Christ’s present reign and the spread of the gospel to produce the idea of an age of near perfection realized in history.2

Late 19th century enthusiasm for the doctrine was difficult to sustain in the face of two world wars and the traumas of 20th century totalitarianism. But it has perhaps come back into fashion in our own new millennium in the guise of a progressive, social justice oriented evangelicalism.

Amillennialism (4) is the easy option—the view that the thousand years is a symbolic period of time corresponding to the period of church history. Christ currently reigns in a spiritual fashion but will return at the end of the age to establish a new heaven and new earth. It’s a good one to pick if you really can’t be bothered with all this end-times malarkey.

To understand my proposed Double Post-tribulational Pre-Amillennialism (5) it helps to put yourself in the shoes of Jesus’ disciples in Palestine or of the early churches in the Greek-Roman world and to ask how the future might have appeared to them. What were their natural prophetic horizons? What loomed large? What mattered, historically speaking?

For the disciples on the mount of Olives what loomed large when Jesus directed their minds towards the future was the war against Rome and the destruction of the temple. This would be a period of intense tribulation (cf. Mk. 13:19), both for the Jews generally and for the disciples, but it would climax in the “coming” of the vindicated Son of man to vindicate and reward his faithful servants.

From the rather different vantage point of Paul addressing the men of Athens in or on the Areopagus, the relevant horizon was not the destruction of the temple, though this may have been at the back of his mind, but the end of classical paganism and the confession of Jesus as Lord by the nations of the empire (Acts 17:30-31). This end would also not be attained without tribulation—the churches had been called not only to believe in Christ but to suffer for his sake (Phil. 1:29). But eventually Christ would “come” in order to be “revealed” to the ancient world and to vindicate and reward the churches that had remained true to this vision of a new future.

It is the prophetically foreseen victory of God and his anointed over the nations of the empire, the defeat of the Satanic power that inspired the opposition, and the vindication of the churches that finally introduces the thousand year reign of Christ with the martyrs.

The historical expression of that reign, which we call Christendom, lasted for a millennium and a half or thereabouts. The subsequent developments—the comprehensive triumph of western secularism, the end of empire, globalisation—are off the New Testament’s radar, over the prophetic horizon and out of sight. And who knows what yet lies ahead? Let’s face it—we are making this part of the story up as we go along. But this doesn’t alter the fact that the creator God will have the last word on injustice, evil and death. There will be a final judgment and a new creation.

So the basic argument is that the New Testament has in view two massive, transformative historical developments: judgment against Israel, judgment against the pagan world and against Rome in particular. Both developments are fully in keeping with Jewish expectations, and it is plausible enough to argue that the prophetic-apocalyptic language used is intended to give new theological meaning to these outcomes in light of the resurrection of Jesus.

This does not mean, necessarily, that the picture is entirely coherent, or that the relation between the two main eschatological horizons is everywhere presented in the same way, or that it didn’t sometimes seem that the three horizons might merge into one, or that Paul or Peter or John had an accurate understanding of how things would work out in practice. Prophecy is not an exact science. But I hold that this Double Post-tribulational Pre-Amillennialist model is the best way to account for the relation between the language of New Testament eschatology and the concrete historical outlook of Jesus and the early churches.

See also:
Millennium, A short history of the

I noticed a distinct lack of reference to ‘second coming’ on the fifth timeline, while it is present on the other four. Is there a reason for that?

Partly for lack of space—I didn’t want to overload the diagram. Partly because I don’t like the term “second coming”. But mainly because I wanted to highlight not the symbolic event, which is too easily taken literally, but the historical events to which the symbolic Son of Man narrative about faithfulness, suffering and vindication was attached.

I’m curious, why don’t you like the term “second coming”? I find it to be a legitimate term to use.

Hebrews 9:28 (ESV) — 28 so Christ, having been offered once to bear the sins of many, will appear a second time, not to deal with sin but to save those who are eagerly waiting for him.

While the writer of Hebrews didn’t use those exact words he was very close and the two phrases mean the exact same thing.

No Preterist timeline?? I feel left out.

Take it up with Wikipedia.

After that he must be released for a little while.

Perhaps the millennium ended with the end of Christendom, and we’re now in the “little while”? In any case, being beyond John’s and Paul’s horizon we’re “off the map” as it were, in a dotted section between Christendom and the last judgement.

Would it bother Paul that Jesus still hasn’t come again two thousand years later?
Revelation and the “alter-empire” of Christ
The resurrection of the just and the unjust in Daniel 12:2, and the horizons of New Testament eschatology
God in Christ reconciling the world to himself is not really the gospel either...

Review: Walter Brueggemann, Virus as a Summons to Faith: Biblical Reflections in a Time of Loss, Grief, and Uncertainty
Seriously? Coronavirus is a dress rehearsal for persecution of the American church?
Review: John Piper, Coronavirus and Christ
Why did Jesus tell his disciples to take swords with them?
The deity of Jesus, the war against Rome, and theology (of the cross) as a hermeneutical tool
Come out of her, my people…
Answers to questions about the narrative-historical method
Scot McKnight, Matthew Bates, and Greg Gilbert on the gospel