Spring blossom : Luke 4:17 The scroll of the…
Samuel Conner: This is, of course, highly…
Peter: Yup, it goes both ways—the…
Andrew: But you could just as well…
Peter: I wonder about the mindset…
END_OF_DOCUMENT_TOKEN_TO_BE_REPLACED 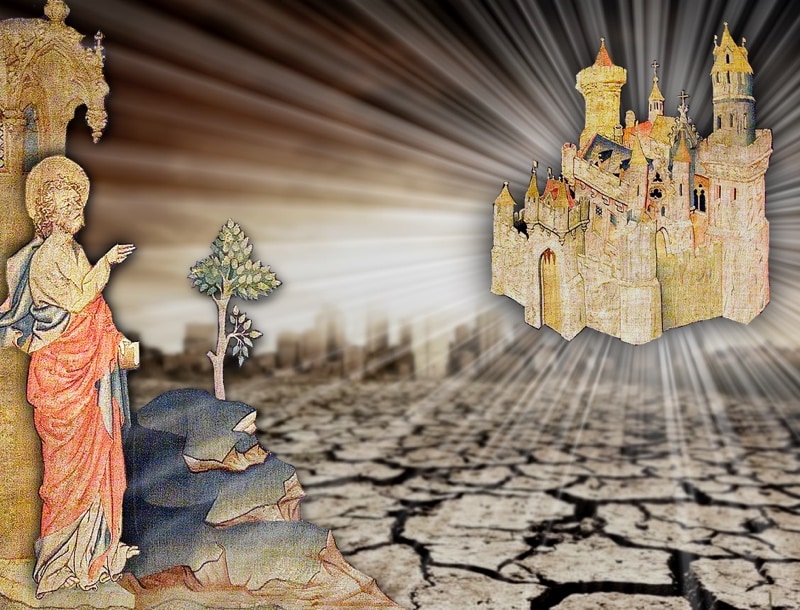 It strikes me that the book of Revelation is well structured. It may have had a complex compositional history, but in its canonical form it’s not just a bunch of semi-intelligible visions thrown carelessly together. So I assume that the author or redactor wanted to bring his readers back from the giddy prospect of a new creation to a view of the future that would have more immediate relevance to such churches as those addressed in chapters 2-3.

These communities believed in Jesus not because they were hoping for new creation but because they were hoping for a new political, cultural, and religious order—a just and holy oikoumenē. The real world matters to us. Jesus was coming soon, bringing recompense with him, “to repay each one for what he has done,” precisely in order to establish that new order (Rev. 3:11; 22:12, 20)—and, of course, with sobering hindsight, I think that we have to understand Christianised Europe, western Christendom, as the fulfilment of that hope.

Anyway, that seems to me to be the main point to make in response to the question. But it occurs to me that there is another way to understand the relationship between the two descent visions, which is to recognise that there is actually only one descent seen from two different perspectives, with quite different implications.

First, the God who is the maker of heaven and earth, the Alpha and Omega, makes all things new, and John sees the holy city coming down out of heaven to be the dwelling place of God with humanity. This vision is on the same apocalyptic level, on the same symbolic scale, as the imprisonment of Satan in the abyss, the first resurrection, the thousand year period, the vanishing of the old creation, the judgment of all the dead, and the lake of fire. John observes it from a great epistemological distance, in a sense, precisely because it is final.

But then he is taken by the angel, in the Spirit, to a high mountain to be shown the city, just he was earlier taken by an angel into the wilderness to see judgment on Rome play out (Rev. 17:1-3).

The overthrow of Babylon the great is described in some detail. Its impact on the politics and economics of the Mediterranean world is vividly evoked: we see the kings of the earth weeping, we hear their lament; the diverse cargo of the merchants is listed, from gold and silver to slaves; shipbuilders and sailors bemoan their loss of business.

In the same fashion, when John sees the city descending at close hand, it takes on a quite different aspect. It becomes a solidly realised construction, a transparent reworking of Ezekiel’s vision of the new temple, in restored Jerusalem, as a measure of the presence of the God of Israel, the God of history, among the nations.

The nations will learn to walk by the “light” of the glory of the one living God and of the Lamb. The old pagan civilisation will give way to a new “Christian” civilisation, with new beliefs, new values. The gates of the city will be always open. The kings of the earth will bring their glory and honour into it, but nothing unclean or detestable or false will be able to enter. The nations are healed—perhaps are repeatedly healed, since this is history—by the leaves of the trees beside the river that rises up beneath the throne of God and flows out of the city.

In other words, it’s John’s way of saying that the final vision also has immediate, in-your-face historical relevance. Ultimately, all things will be put right, absolutely right, but that perfect consummation has to be lived out imperfectly under the particular historical circumstances of late antiquity. The vision inspired the task of constructing a whole new political-religious order, at the heart of which was the priestly service of the churches, in the wake of the collapse of classical paganism.

We are having to do something similar today, in the wake of the collapse of Christendom, of the Christian West, and in the face of a mounting global crisis. We may look to that final vision of a new heaven and a new earth and of a renewed urban ecology, and ask what it means for the priestly witness of the churches. It won’t be what John saw in the pre-Christendom ancient world, but it will have to be no less compelling.

Thank you, Andrew, and I enjoyed the clip at the end very much.

The 2nd temple Jews were hoping for the coming of messiah to overthrow the Roman Empire and establish a just political, cultural, and religious order, but is that the hope of the new communities reconstituted around Jesus? Didn’t Jesus say that his kingdom is not of this world? How about 2 Peter 3:13 or Heb 13:14? Were they looking forward to a temporal new order or a spiritual one? You probably have already answers written on this blog. If you do, please provide links. Thanks.

I probably do have an answer to this question somewhere on this blog, but sometimes it’s easier to write something new than find the old stuff, frankly!

Why did Jesus instruct his disciples not to preach the kingdom of God to Gentiles and Samaritans?
Why does Jesus give the kingdom back in the end and become subject again to God?
What’s wrong with the “Romans Road” to salvation?
Why will Sodom and Gomorrah be present on the day of God’s judgment against Israel?
Was Gehenna a burning rubbish dump, and does it matter?