Juanita: Hi there Sam We spoke…
Andrew: David, many thanks for this…
David: And, for further reading, I…
David: There’s a substance to this…
Arthur Davis: That, I think, is the…
END_OF_DOCUMENT_TOKEN_TO_BE_REPLACED

Conversation with Mike Bird about In the Form of a God (0 comments)
Answering Mike Bird about the referent of "all things" in 1 Corinthians 8:6 (0 comments)
Interview: The Preexistence of Christ and Narrative Historical Theology (1 comment)
How we got from kingdom to Trinity: Constantine and pagan monotheism (2 comments)
END_OF_DOCUMENT_TOKEN_TO_BE_REPLACED

The feeding of the five thousand sheep without a shepherd 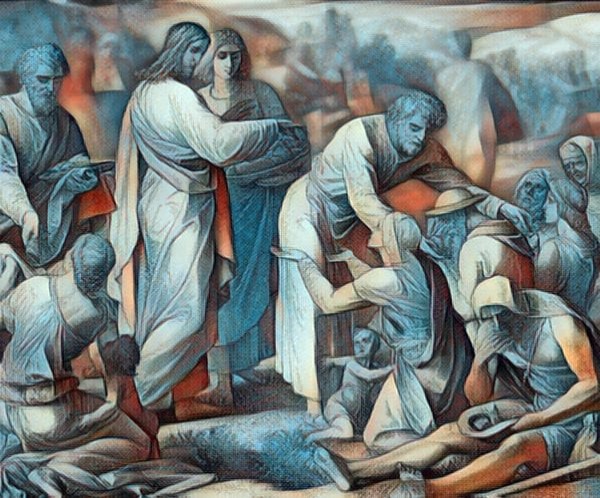 In Mark 6 Jesus sends the twelve out in pairs to call people to repentance, cast out demons, and heal the sick (Mk. 6:7-13). Perhaps because of their mission, the name of Jesus becomes widely known. Herod hears about it, and he comes to the conclusion that John the Baptist has been raised from the dead and is behind this public campaign for moral and religious reform (Mk. 6:14-20). Mark then tells the story of John’s wretched demise (Mk. 6:21-29).

When the disciples return from their mission, they debrief, and Jesus takes them away by boat to a desolate place along the coast for some well earned rest and replenishment (Mk. 6:30-33). But, of course, the people run on ahead to meet them. No peace for the wicked, as they say. Jesus sees the great crowd and he has compassion on them because “they were like sheep without a shepherd,” and he spends some time teaching them. It then gets late, and they have to find a way to feed the five thousand men and presumably their family members.

What is going on here? What does this episode tell us about Jesus and his mission to Israel? The key to interpretation is to be found in the “sheep without a shepherd” saying.

Sheep without a shepherd in the Old Testament

There are a couple of early passages in the Old Testament that highlight the risks of Israel being sheep without a shepherd. Joshua is appointed so that “the congregation of the LORD may not be as sheep that have no shepherd” (Num. 27:17). Micaiah warns Ahab that if he goes into battle, all Israel will be “scattered on the mountains, as sheep that have no shepherd” (1 Kgs. 22:17).

But the more important background for Jesus’ saying is found in two lengthy passages in Ezekiel and Zechariah.

First, Ezekiel is told to prophesy against the shepherds of Israel. They do not feed the sheep. They do not strengthen the weak, heal the sick, bind up the injured, or seek the lost. Instead, they rule over them with force and harshness. Therefore, the sheep were “scattered, because there was no shepherd, and they became food for all the wild beasts. My sheep were scattered; they wandered over all the mountains and on every high hill. My sheep were scattered over all the face of the earth, with none to search or seek for them” (Ezek. 34:5–6).

Secondly, in an oracle against Israel’s hostile neighbours, Zechariah celebrates the coming of Israel’s king to Jerusalem, unarmed, “humble and mounted on a donkey, on a colt, the foal of a donkey” (Zech. 9:9). It is safe to act in this ludicrous fashion because the instruments of warfare have been destroyed, peace has been established. Even the Greeks will be defeated, and diaspora Jews will return to their stronghold (Zech. 9:10-13).

The people currently “wander like sheep; they are afflicted for lack of a shepherd” (Zech. 10:2). They have been deceived by the “household gods” and diviners who tell lies. Therefore, YHWH is angry with the leadership of Israel—the shepherds—and will punish them; “for the LORD of hosts cares for his flock, the house of Judah” (Zech. 10:3). He will strengthen the house of Judah, and he will bring back those who have been scattered “because I have compassion on them, and they shall be as though I had not rejected them, for I am the LORD their God and I will answer them” (Zech. 10:6).

Then, remarkably, in chapter 11 the prophet is first commissioned as a shepherd of the flock doomed to slaughter (Zech. 11:4-14), then as a worthless shepherd (11:15-17). These are symbolic enactments that speak of what YHWH is about to do to his people.

A royal shepherd and a prophet-shepherd

The metaphor, therefore, can be taken in two directions. In both passages God is the owner of the flock of Israel, just as he is the owner of the vineyard of Israel (cf. Is. 5:1-7). They are his sheep, but particular people in Israel have been appointed as shepherds with responsibility for care of the flock—just as in Jesus’ retelling of the parable of the vineyard tenant farmers are accountable to the master for its maintenance.

The problem is that the leadership is corrupt. These are worthless shepherds. The sheep are malnourished, exploited, scattered. So God must act to rectify the situation.

In the Ezekiel passage, YHWH directly takes upon himself the task of shepherding his people. He will rescue the sheep from the mouths of the bad shepherds, he will search for the sheep and regather them, he will “feed them with good pasture, and on the mountain height of Israel shall be their grazing land” (Ezek. 34:14). He is not a shepherd, he is the owner of the flock; but there are no good shepherds available, so he will have to do the job himself. “I myself will be the shepherd of my sheep, and I myself will make them lie down, declares the Lord GOD” (Ezek. 34:15)—but only until he can “set up over them one shepherd, my servant David, and he shall feed them: he shall feed them and be their shepherd” (Ezek. 34:23).

Zechariah 9-13 is harder to read. Again, the Lord will act to save “the flock of his people,” gather the scattered sheep, and punish the leaders (Zech. 9:16; 10:3, 8-10). But in the place of the Davidic shepherd we have the ambiguous appointment of the prophet as “shepherd of the flock doomed to slaughter” (Zech. 11:4). Zechariah breaks the staff of favour with the nations and the staff of union between Judah and Israel (Zech. 11:7-14). Then he takes up the equipment of a worthless shepherd as a sign that YHWH is “raising up in the land a shepherd who does not care for those being destroyed” (Zech. 11:15-16).

So when YHWH intervenes to shepherd his helpless and scattered flock, he may either hand over the work of shepherding to a righteous Davidic king or he may appoint a prophetic figure to embody the coming judgment against Israel—a disturbing narrative which ends with the dramatic declaration, “Strike the shepherd, and the sheep will be scattered…” (Zech. 13:7).

The feeding of the five thousand

The feeding of the five thousand is clearly, in some fashion, a symbolic enactment of the feeding of the neglected or lost sheep of Israel. The disciples have a perfectly reasonable solution to the problem of the crowd’s hunger: send them away to buy something. There is no great distress or need here; no one is in need of healing. But Jesus takes the opportunity presented to him to stage a parable of divine intention, in much the same fashion as the elaborate commissioning of Zechariah as a shepherd served as a parable for the disintegration of Israel.

Part of the meaning of the parable, therefore, must be that when the sheep are scattered over the hills, YHWH may be expected to intervene to judge the worthless shepherds of the people and to restore the flock. We have just been reminded of John the Baptist’s censure of Herod, whose behaviour no doubt featured prominently in the propaganda of the reform movement. The feeding of the five thousand is an implicit rebuke to the governing elites and a warning of impending catastrophe.

In this respect, we are closer to Zechariah in this story than to Ezekiel. The Davidic shepherd appointed by YHWH to look after his flock is not yet in view. Jesus is the prophet-shepherd who symbolically and theatrically enacts the intervention of God in the context of a programmatic extension of the reformist vision of John the Baptist: proclamation of the coming kingdom of God as judgment and restoration, an uncompromising call to repentance, backed up by concrete evidence that God is powerfully liberating his people.

Perhaps the instruction to sit in groups on the “green grass” is an allusion to the abundant rain and “vegetation in the field” that will attend the restoration of the lost sheep of the house of Israel (Zech. 10:1-2).

Mark seems, moreover, to have envisaged an outcome similar to Zechariah’s. The prophet-shepherd will be struck and the sheep will be scattered (Mk. 14:27), and the Lord will gather the nations against Jerusalem, and the city will be taken (Mk. 13:3-23; cf. Zech. 14:2). But precisely because of this judgment—not in spite of it—“the LORD will be king over the all the earth” (Zech. 14:9).

In fact, Jesus seems more concerned about the future role of his disciples in caring for restored Israel than his own role as Davidic shepherd. “You give them something to eat,” he says when they come to him worried about how the multitude will be fed (Mk. 6:37). He needs them to provide for the people directly, even if miraculously, as an expression of trust in the God who is at the heart of this reforming of Israel.

He will be the vindicated Davidic king, seated at the right hand of God (cf. Mk. 14:62), given the nations as his inheritance, but it is his disciples who will have day-to-day responsibility for feeding the flock (cf. Jn. 21:17)—or for managing the restored and fruitful vineyard of Israel (Mk. 12:9).

Hi Andrew. Thanks for this. Do you consider the metaphor of the ‘lost sheep’ to apply to the story of Israel alone i.e. has the task of the shepherd been completed by Jesus and the disciples? Does the responsibility of the disciples in managing the restored and fruitful vineyard of Israel have any contemporary application? Do the tendrils of the vine extend to embrace expressions of church today or should we be exploring a new metaphor?

I think that we are on much firmer ground exegetically and hermeneutically if we confine Jesus’ frame of reference to first century Israel. Obviously metaphors can be re-used by the church in different contexts and the tradition extended. But we ought to keep in mind that these are metaphors for God’s chosen people. If we talk about non-Christians generally as “lost sheep” or a “fruitless vine”, we have started a different tradition.

Thanks Andrew. That helps with today’s sermon prep.

Conversation with Mike Bird about In the Form of a God NEW
Answering Mike Bird about the referent of "all things" in 1 Corinthians 8:6
Some hazardous thoughts on the Trinity for a new year and a new era
Why will Sodom and Gomorrah be present on the day of God’s judgment against Israel?
Who will recline at table with Abraham, Isaac and Jacob in the kingdom of heaven?

Conversation with Mike Bird about In the Form of a God
Answering Mike Bird about the referent of "all things" in 1 Corinthians 8:6
Interview: The Preexistence of Christ and Narrative Historical Theology
How we got from kingdom to Trinity: Constantine and pagan monotheism
Jesus and Paul, works and faith
Some hazardous thoughts on the Trinity for a new year and a new era
Was it Roman custom for people to return to their home town for a census?
A Hindu asks a very good question about the death of Jesus and the salvation of Gentiles
END_OF_DOCUMENT_TOKEN_TO_BE_REPLACED