Samuel Conner: Thank you, Andrew; this is…
peter wilkinson: You are so right. How did I…
Andrew: Ah, so not Christianity…
peter wilkinson: https://www.christiantoday…
Andrew: Very good. Do you have a…
END_OF_DOCUMENT_TOKEN_TO_BE_REPLACED

The Apocalyptic Symbolism of Mark 8:38 and (not) the Final Reign of God (1 comment)
Societal collapse, deep adaptation, and an agenda for mission (8 comments)
Multifaith Matters podcast: my conversation with missiologist Michael Cooper about the narrative-historical method (1 comment)
What is the essence of Christianity? (9 comments)
END_OF_DOCUMENT_TOKEN_TO_BE_REPLACED

Was Jesus wrong about Abiathar the high priest?

For the background to this see Ian Paul’s very interesting post “What do we do when the Bible is ‘wrong’?” Ian starts by discussing Peter LaRuffa’s (on the face of it) ludicrous statement:

If, somewhere within the Bible, I were to find a passage that said 2+2=5, I would believe it, accept it as true and then do my best to work it out and understand it.

He ends with a recent online spat over a particular instance of supposed biblical inaccuracy—Jesus’ asssertion that David entered the house of God and ate the consecrated bread “in the days of Abiathar the high priest” (Mk. 2:26). The problem is that the high priest in question was Ahimelech not Abiathar (1 Samuel 21:1-6). The discrepancy was mentioned in a contribution made by John Byron to Peter Enns’ series of scholarly “aha” moments. 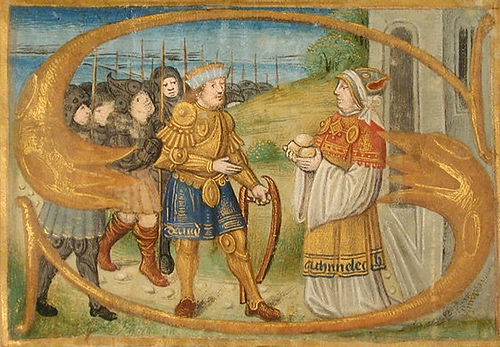 In response Craig Blomberg has argued that epi Abiathar in Mark 2:26 does not mean “in the days of Abiathar” but “in the passage about Abiathar”. He points to Mark 12:26, where Jesus says:

And as for the dead being raised, have you not read in the book of Moses, in the passage about the bush (epi tou batou), how God spoke to him, saying, ‘I am the God of Abraham, and the God of Isaac, and the God of Jacob’? (Mark 12:26)

Here the preposition must mean something like “in the passage about”. Blomberg then notes John Wenham’s proposal that it was synagogue practice to label sections of the scriptures using a prominent name from the passage. So in Mark 2:26 Jesus asks the Pharisees, “Have you not read what David did… in the Abiathar passage?” Abiathar was the son of Ahimelech and appears in the next chapter.

There are, however, some weighty objections to this argument. William Lane, for example, notes that epi Abiathar is some distance from “have you not read”; that Abiathar is not a central figure in this section of 1 Samuel; and that the evidence from Tannaitic documents is that the section of scripture was named from a term that came early rather than late in the passage.1 With regard to the first point, I would add that epi Abiathar most naturally qualifies not “Have you never read…” but “he entered the house of God”.

Though the better known of the two, Abiathar does not appear until 1 Sam 22:20 and then not as “high priest.” Furthermore, to function as a heading ἐπί would need to follow ἀνέγνωτε more closely rather than several clauses later…. Therefore, with no strong MSS evidence of this being a later gloss, we must assume that the name “Abiathar,” a high priest during David’s reign, was exchanged here with his father’s name, “Ahimelech.”2

There are also some overlooked New Testament passages that have a bearing:

In the fifteenth year of the reign of Tiberius Caesar, Pontius Pilate being governor of Judea, and Herod being tetrarch of Galilee, and his brother Philip tetrarch of the region of Ituraea and Trachonitis, and Lysanias tetrarch of Abilene, during the high priesthood of Annas and Caiaphas (epi archiereōs Hanna kai Caiapha), the word of God came to John the son of Zechariah in the wilderness. (Luke 3:1–2)

And one of them named Agabus stood up and foretold by the Spirit that there would be a great famine over all the world (this took place in the days of Claudius (epi Klaudiou)). (Acts 11:28)

Blomberg does not mention these texts, but they seem to demonstrate clearly enough the use of epi with the name of a person—including the high priests Annas and Caiaphas—to designate the period when they were active or in office. So it’s difficult to agree with him that “the wording of Mark 2:26 in the Greek is very unusual”, requiring such a translation as “in the passage about Abiathar”. BDAG has “marker of temporal associations, in the time of, at, on, for” as a meaning for epi with the genitive (“time within which an event or condition takes place”).

The parallels, moreover, do not really permit the “well attested but vaguer translation”, which Blomberg keeps in reserve: “in the time of Abiathar” or “in the days of Abiathar”. “In the days of Claudius” means “when Claudius was emperor”, not when Caligula was emperor.

So it seems to me that we are stuck with the discrepancy, unless anyone has a better solution.

Should your references to Craig Bartholomew not be to Craig Blomberg?

Oddly, I got Blomberg right in one instance. Apologies to Craig Blomberg. Corrections made. Thank you, Peter.

I was hoping for new light to be cast on this academic storm in a tea-cup — how disappointing. Is there some high-powered search tool which identifies and locates biblical Greek constructions such as ἐπί whatever etc, or do you just trawl through on-line concordance entries?

I use Accordance. Many Bible search programs have grammatically tagged Greek and Hebrew texts, allowing you to search complex constructions. What sort of new light were you hoping for?

I actually like LaRuffa’s statement, but I probably would mean it in a very different way than he does.

If the Bible said 2+2=5, I would assume it was true, and then ask the question, “In what sense is this true?”  Certainly not in the sense of teaching good mathematics, but that’s not what the Bible is doing.

For instance, when George Orwell uses 2+2=5, he’s making a statement about the power of totalitarian regimes to control the thoughts, and ultimately the social reality, of the people under those regimes.  So, in 1984, 2+2=5 is true in the context of the narrative and the point the narrative is trying to make.

I take it LaRuffa probably means that, if the Bible says 2+2=5, we should all actually revise our mathematical understanding such that 2+2=5, but that presupposes that’s the kind of information the Bible is trying to convey.

So, I’m all for assuming bibcally “wrong” statements are true and figuring out what that means, and I would say the ability to do that is an exegetical task, not an apologetic one.

Is that right? Surely in the context of the narrative of 1984 2+2≠5. Otherwise there is no ground within the story from which intellectual repression can be resisted. The régime is wrong to say that 2+2=5.

So in what good way could we argue that 2+2=5 might be true in the Bible? How would it not be another example of the suppression of intellectual freedom or universal rationality?

I suppose Jesus might have told a parable in which it was ironically stated that 2+2=5, but we would know from the genre that we are not meant to take it seriously—a bit like cutting off your hand and throwing it away.

I agree that we should be much less willing than we often are to concede that scripture is in error over some point or other. It often turns out that we are reading badly or lack linguistic or factual knowledge. But does that mean we never get to the point where we have to admit that a discrepancy such as the one I discussed I above cannot be resolved?

Within the context of 1984, 2+2=5 is not an assertion made by the novel about math — it is something pondered by the character as a reflection of the power of a totalitarian regime.  Is their power so absolute that they could dictate something so counterfactual and people would believe it?

But what you wouldn’t say is that 1984 is trying to teach that 2+2=5 or that we have textual evidence that Orwell believed 2+2=5.  The statement is not true in that sense and was never intended to be true in that sense.

So, when Jesus names the wrong high priest, I have to ask myself what the purpose is for that being included in Scripture.  Why did a gospel author include that?  I think saying, “Abiathar wasn’t the high priest, therefore we have to do linguistic gymnastics to make it sound like he wasn’t really saying that,” is operating off the same faulty assumptions that, “Abiathar wasn’t the high priest, therefore the Bible (or Jesus) has errors” does.

You’ve probably seen the same compilations of biblical “errors” that I have, and the overwhelming percentage of them (not all, surely) boil down to making OT prophecies literal and pointing out that they didn’t literally happen.  I would argue those prophecies are true, but they are not true in the sense that they are a historiographical narration of events.

Sorry for the double comment, but you asked a question I think I left in the dust.  In what good way could we affirm a statement in the Bible like 2+2=5, or in this case, Jesus noting the wrong high priest.

Just shooting from the hip, it could indicate that Jesus’ memory biologically works the way most of ours do, which is imperfectly.  It could display a way of citing Scripture and/or history that reflects standards and a tradition different from the way we cite historical events, today.  It could be that Jesus is trying to draw a theological connection between David and Abiathar rather than a historiographical one.

There will always be tension in the text if we subscribe to some form of Biblical inerrancy. I’ve long ago abondoned it for the less rigid “infallible in matters of doctrine” position.

It will not satisfy strident evangelicals but it’s good enough for me.

RE: confusion over Abiathar son of Abimelech — A study of narratives that involve use of what Moses in Deuteronomy 33:8 terms “Thy Urim and thy Thummim” shows a pattern of confusion which might stem from the separation of tribes to the northern kingdom and the southern kingdom. As Maimonides points out use of the oracles is contingent upon the Seer being anointed with the Holy Spirit. Possibly only the southern kingdom had an anointed Seer. Confusion may stem from an influence of the Northern Kingdom or from not having the proper anointing to understand use of the Oracles and things like that. For example Moses in Deuteronomy 33:8 indicates use of the oracles at Massah and at the waters of Meribah while Numbers 20 indicates messages is sent not by oracles bui at the tent of meeting.

Thanks for this. Abiathar was a priest at the time and presumably was arrested along with Ahimelech (1 Sam. 22:11; 23:9), but I don’t see how that changes anything. Why reference Abiathar, who had nothing to do with the incident as far as the narrative goes, and not Ahimelech, who had everything to do with it? I suppose you could argue that he is more important, from Jesus point of view, because he went on to serve David as high priest and was one of those responsible for bringing the ark of the covenant to Jerusalem (2 Sam. 15:29).

The Apocalyptic Symbolism of Mark 8:38 and (not) the Final Reign of God
Societal collapse, deep adaptation, and an agenda for mission
Multifaith Matters podcast: my conversation with missiologist Michael Cooper about the narrative-historical method
What is the essence of Christianity?
How does the New Testament predict the future?
END_OF_DOCUMENT_TOKEN_TO_BE_REPLACED