I replied that I don’t argue with the Trinity as a “post-biblical theological rationalisation” of the New Testament story, which elicited, understandably, the response: “I’m not sure on what basis one can validate it as a post-biblical rationalisation without also validating other enculturated doctrines for the same reasons.” So as a rather oblique way of celebrating the resurrection of the Son of God, which is not the rationalisation of God the Son, I will try to explain what I mean. Naturally, this will be an over-simplification.

The primary and dominant narrative of the New Testament, by a long way, is the apocalyptic-kingdom one: Jesus is sent to Israel with a message of judgment and salvation for his people; he faithfully carries out his prophetic-messianic mission even to the point of death; God vindicates him by raising him from the dead; God seats him “at his right hand in the heavenly places” (Eph. 1:20); and he gives him supreme authority to judge and rule over both Israel and the nations throughout the coming ages. It is a story about what God is doing with regard to his people at a particular moment in history. I may have said something along those lines before.

The Easter event is part of this narrative. What we celebrate this weekend is not the eternal existence of the Father, Son and Spirit as three-in-one but the vindication of the faithful servant of the Lord, the “Son” with whom God was well-pleased, and the assurance thereby given to the early persecuted church regarding the life of the age-that-was-soon-to-come. Hallelujah! He is risen indeed! 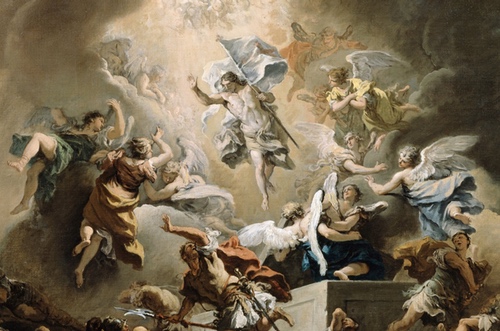 There is a later, secondary, minor, non-apocalyptic narrative according to which Jesus comes from God, as the Word become flesh, to save humanity and then returns to God. Roughly speaking. It emerges—noticeably in John’s Gospel—as theological reflection on the apocalyptic-kingdom narrative from some cultural and intellectual distance.

As long as the church felt insecure and vulnerable in the Greek-Roman world, the apocalyptic narrative continued to resonate: it accounted for suffering and offered the hope of vindication and victory. But as things settled down and the church became increasingly confident that it would get the better of paganism, it became necessary to translate the apocalyptic-kingdom narrative into a conceptuality that would define and sustain a new “Christian” worldview under very different socio-religious conditions.

The doctrine of the Trinity as it was formulated by the Church Fathers was an idealising rationalisation of the apocalyptic-kingdom narrative in incarnational terms, largely reliant on John’s Gospel. It brought the New Testament story to a halt and installed in its place a systematic theology. It was an inevitable, and I would say necessary, development. The doctrine of the Trinity was not an arbitrary “enculturation” of the biblical material. It was an enculturation and rationalisation of—an attempt to solve the real problem of—the core apocalyptic narrative of the New Testament. It has some claim, therefore, to being a pivotal and defining translation at least for as long as the cultural and intellectual conditions of western Christendom prevailed.

In the modern era, however, two related developments brought the reign of theology in the western world to a demoralising end. First, with the Enlightenment the idealising or Platonic epistemologies (ways of knowing) that had sustained the theological worldview for more than a thousand years began to lose ground to a critical, empirical, and increasingly secular form of reasoning. 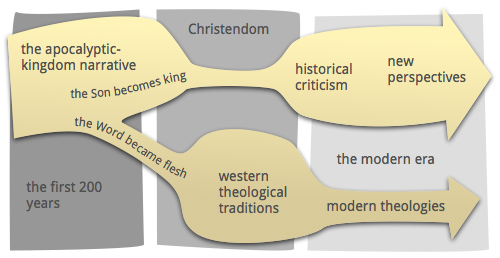 Secondly, arising out of this intellectual shift, the Bible was subjected to fierce historical-critical examination. The very damaging impact of this was met by entrenched fundamentalist-conservative resistance from sections of the church, but over the last 50 years we have learnt to relocate the New Testament story in its Jewish setting and we have found that it makes very good, believable historical sense. Basically, this boils down to the so-called “Third Quest” for the historical Jesus and the New Perspective on Paul.

My “narrative-historical” approach is simply a more rigorous application of the methodology: I think that New Testament thought or theology is consistently—apart from a peripheral conviction about a final judgment and renewal of creation—the expression of Jesus’ and the early church’s engagement with history as part of the narrative of second temple Judaism.

One of the consequences of the recovery of history has been, however, that to varying degrees it now appears that the major theological constructs passed down to us—such as Trinitarianism, an individualistic soteriology, and an a-historical, absolute eschatology—are rather poor lenses through which to read the New Testament. My view, therefore, is that we need to undertake a quite radical overhaul of our everyday “theology” in the light of the emerging historical perspective.

See also:
The resurrection of the sleeping saints from their tombs
Resurrection from the dead

The challenge, I think, is that much of the evangelical church is entrenched in a worldview that is universal, abstract, propositional, and rationalistic. Theology is about absolute truth. You either believe in it or you are a dangerous relativist. The Trinity is either true or it is not. It is either a fundamental aspect of Christian belief or it is not. It is either a “Biblical” doctrine or it is not. It starts as a fundamental belief, it is proof texted in scripture, and then it is used as a litmus test for orthodoxy. If it is true than scripture must be read through that lens. For most, systematic theology is Christianity. Which is why every time you try to explain the gospels not as how Jesus was God but how Christ became King the theology police jump in and require loyalty statements.

Changing people’s views on individualistic soterology and ahistorical eschatology is an easier task than approaching the Trinity to my mind but those two are still incredibly ingrained in evangelicalism.

Perhaps my background in the conservative world of American evangelicalism colors my assessment, but I have seen few indicators that left or right or comfortable exploring new approaches. As you have noted with Tony Jones for example, instead of leaving atonement theories behind they want to build a better atonement theory.

It almost feels like you are better off working within a community that has no theological background or entrenched worldview and building from scratch as it were. Growing a storytelling community that is not built on systematic theology.

I could not have said it any better, Kevin. I attach my name as a signatory to your comment. Spot on.

Andrew, your link above in the tenth paragraph (“narrative-historical”) doesn’t work – there’s nothing at the other end but an error message.

Fixed. Thank you for pointing it out, Craig.

You say: ” The doctrine of the Trinity was not an arbitrary “enculturation” of the biblical material. It was an enculturation and rationalisation of—an attempt to solve the real problem of—the core apocalyptic narrative of the New Testament.” How does this explanation render the Trinity less arbitrary? This still begs the question why the Latin/Greek development of the Trinity should be considered more valid than the other enculturated developments of the NT narrative. The Nestorians would say the same, as would the Arians. Given the culture-specific assumptions, the Trinity would be a possible alternative (Arius used similar assumptions). But why would one culture’s assumptions be any more valid than, say, assumptions from Chinese or African assumptions? And why bother if we know that “God” according to Athanasius is not the same as ” God” according to Jesus?

Jaco, I take your point (and apologies for not replying to you on FaceBook). I’m only arguing, though, that the Latin-Greek development of the Trinity was not arbitrary within its intellectual context, as an attempt to rationalise the apocalyptic story about Jesus largely on philosophical grounds (with some help from John). If the apostles had headed east rather than west, we probably wouldn’t have had the Trinity. But heading west was at that moment the obvious way to go (Thomas notwithstanding, perhaps), given the Jewish-political narrative from Daniel onwards, so in that respect we were bound to end up where we did. The Greek-Roman world had to retell the story—or rather abandon the story—in the way that it did. To my mind, the real problem is not that Athanasius’ God is not Jesus’ God. That’s history. It’s that we don’t know what to do now that the hegemony of European Christendom has come to an end. How now do we talk about God and Jesus in a way that holds true to the New Testament and works within our own peculiar rationality.

Thank you Andrew. Yes, we agree on the fact that the Trinity developed within a specific framework. I think we disagree on the significance of this development and the extent to which it influences the validity of using this developed doctrine to understand God and God-relations in the Bible. I think it is very significant, and validating one enculturated doctrine - consistently argued - should validate the rest, whether the Nicean/Chalcedonian trinitarians render these others heretical or not.

I want to push it a bit futher, if I may. It is reductionistic to say that the Trinity alone is the only doctrine that the Roman/Greek Churches could arrive at, given their assumptions. Raymond Brown noticed how Athanasius in his De Decretis XXI to XXIII reported on the criticism levelled against them, mostly on account of the alien concepts involved in arriving at the Nicean formulation of God and Jesus. Fact remains that other alternatives were also present, and the Arians proposed very compelling arguments, although also based on the inferences by Origen of Alexandria. Marcellus of Ancyra provided yet another alternative theology to Nicean and Arian theologies. The victory of Nicean theology did not imply hermeneutical superiority, nor does it imply a conclusion less arbitrary and biased compared to competing alternatives. So, would the migration of the apostles to the West inevitably have led to the Trinity? Certainly not! And the mere fact that it prevailed is no valid cause for sentimentality about it.

I think it was JAT Robinson in his The Human Face of God who noted that the prototypical understanding of Jesus being the reflector/representative/revealer of God would also be the understanding best incorporated into the modern mind. You may follow a discussion here: http://tinyurl.com/y5zrqc89.