Here is a simple model that captures what seem to me to be the three basic constructive hermeneutical options that we have for describing how the ancient text of scripture speaks to the modern (committed) reader. There is the common understanding that the Bible as sacred text or “Word of God” speaks directly and more or less clearly to the modern reader; and there are two indirect approaches, one by the way of narrative, the other by the way of analogy.

At the centre is the hermeneutically “naïve” assumption that the text speaks more or less directly as “Word of God” to the modern reader or hearer. The historical remoteness of the text is acknowledged to the extent that it requires translation and some degree of cultural and historical explanation; and there is generally some awareness that this process is controlled and validated by a particular interpretive tradition. This is the hermeneutic that underpins much popular use of scripture, notably in preaching and devotional reading; but it also carries considerable theological weight, and, as I suggested in a recent post on “Scripture as the (historical) theological interpretation of history”, the method has tended to suppress historical contingency or at best subordinate it to its own programme. A little ironically, postmodern hermeneutics that stress the role of the reader in the construction of meaning may be included under this heading because the text is the immediately given object of interpretation.

The hermeneutic that I have sought to push to the forefront (no doubt too aggressively at times) stresses the close and contingent engagement of an intrinsic New Testament theology with a historically construed narrative, through the diachronic extension of which the modern reader is connected to the text. This hermeneutic is associated classically with the Antiochene school of interpretation and more recently with the widespread scholarly interest in the recovery of Christian origins that tends to get labelled the “nth quest for the historical Jesus” or the “New Perspective on Paul”, though in my view the method is not practised as consistently as it might be. The approach takes scripture to be principally a historical witness to the troubled existence of the “family” of Abraham. It tends to regard the New Testament as an account of decisive historical transition—an account which, in my view, is projected into a foreseeable future in order to make sense of the Jewish war, the intense suffering of the early churches, and the eventual “conversion” of the empire. A consistent narrative hermeneutic then also provides a starting-point for addressing the diverse theological challenges arising from the collapse of the European Christendom paradigm.

The way of analogy

The third hermeneutic recognizes (at least implicitly) that there is a problematic epistemological distance between the ancient text and the modern reader but seeks to bridge the gap by asserting some principle of analogy between the two contexts. So, for example, we may accept that the Beatitudes originally described the eschatological community of Jesus’ followers but argue that the church today is nevertheless in some sense like that community and therefore constituted by the same texts. The method can easily be used (arguably misused) in unhistorical ways (consider the old and now largely discredited allegorical method of interpretation associated with the Alexandrian school), but there are strong reasons for affirming its essential compatibility with a consistent narrative-historical hermeneutic.

First, analogy is already characteristic of biblical prophetic discourse: the exodus, for example, was both a formative historical event for the community of Israel and a paradigmatic type of redemption from oppression that could be used metaphorically or analogically in order to reinterpret novel historical circumstances.

Secondly, I think that the biblical narrative has a fundamentally analogical structure (I make the case in Re: Mission), according to which the story of the people of God, which is always a story of the corruption and restoration of what has been created, provides the ground for the hopeful mission of the church towards humanity. The witness of the Jesus community to the renewal of Israel becomes an analogy for the witness of the historical people of God to the renewal of creation (the diagram is taken from a previous post). 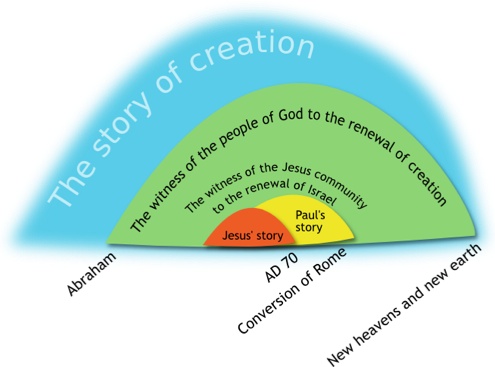 I think that this analogical structure is strikingly apparent in Romans 8:19-22: the whole creation looks forward hopefully to seeing the vindication and glorification of the Christ-like community—that is, the martyr community—in the ancient world because that moment (crudely labelled the conversion of the empire) will be a sign of its own final liberation from the bondage to corruption and death. It is this shift from resurrection as “renewal” of the people of God (Christ as firstborn martyr from the dead: Col. 1:18) to resurrection as “renewal” of creation (Christ as firstborn of all creation: Col. 1:15) that grounds the analogical transposition from the inner story of the New Testament to the outer story of the mission of the people of God.

Another keeper Andrew….the diagrams, the glossary, words like “transpose”, “analogy”; very helpful. Gets me thinking more about (or what Richard Hay’s book “The Conversion of the Imagination”) has me thinking about, is "metalepsis" where one text alludes to an earlier text in a way that evokes resonance’s of the earlier text beyond those explicitly cited (which I hope you will write on one day).

But anyway I have a question, you said, “I think that this analogical structure is strikingly apparent in Romans 8:19-22: the whole creation looks forward hopefully to seeing the vindication and glorification of the Christ-like community—that is, the martyr community—in the ancient world….” This is a dramatic hermeneutical shift in the understanding of those Scriptures. And though I am seeing Romans as more of an eschatological text…it is still not the popular interpretation. N.T. Wright has helped somewhat in the credibility factor with his narrative/historical take on Jesus in the gospels but now we are going further with Paul. My question is, how do you bring this to the table? I am careful, I believe I’m using wisdom, but often I feel muzzled…not wanting to undo any previous gains. How do you handle it? Are there others, other communities etc. that you are walking this out with; who are coming into this? I’m so excited about what I’m learning/understanding…it is SO important. Could you offer any advice?

These are tough questions, Jim. I’ve responded up to a point in this post.

A new course: Understanding and Practising “Missional Church”
What Jesus has to teach us about our response to the climate crisis
The Apocalyptic Symbolism of Mark 8:38 and (not) the Final Reign of God
Societal collapse, deep adaptation, and an agenda for mission
Multifaith Matters podcast: my conversation with missiologist Michael Cooper about the narrative-historical method
What is the essence of Christianity?
How does the New Testament predict the future?
Who will be taken? Who will be left behind? Darn it, we’re all too late anyway!
END_OF_DOCUMENT_TOKEN_TO_BE_REPLACED