davo: When the ordinary Jewish…
Mark Newton : What I don’t understand is…
Kevin Holtsberry: Very helpful summary. I…
Andrew: Thanks, for this, Richard…
Samuel Conner: Just starting into your new…
END_OF_DOCUMENT_TOKEN_TO_BE_REPLACED

In the form of a God: The Pre-existence of the Exalted Christ in Paul: what the book is about and why (2 comments)
Notes on J. Richard Middleton’s The Liberating Image: The Imago Dei in Genesis 1 (0 comments)
Our eco-theological blindspots and the climate crisis (0 comments)
Biblical hermeneutics and the destabilising of the world (0 comments)
END_OF_DOCUMENT_TOKEN_TO_BE_REPLACED

Does it matter whether it really happened?

There are two parts to the narrative-historical hermeneutic that I am trying to develop and promote on this site. I argue, first, that the Bible should be read as the complex but essentially coherent story that a people told about its historical experience over a long period of time; and as a corollary, that the “theological” content of the Bible is part of the telling of that story.

Then secondly, I suggest that the church today can and should learn to live, do and believe according to this historically grounded narrative and not according to the various reductionist theological schemata that have been superimposed on scripture throughout the ages. In my view, the hermeneutic not only gives us a much better understanding of the New Testament; it also gives us a powerful paradigm for reconceptualizing the identity and purpose of the church after Christendom.

The argument has been controversial in two main respects. First, the narrative-historical reading of the New Testament has challenged aspects of our traditional theologies—the beliefs that we hold regarding the gospel, the atonement, the manner of Jesus’ divinity, the second coming, heaven and hell, for example.

Secondly, there have been disagreements over how the story is told and how it relates to history: did Jesus promote a mission to the Gentiles? did his death have the same meaning for Gentiles as for Jews? does New Testament eschatology have in view the destruction of Jerusalem? the conversion of the empire? both? neither? something else? That sort of thing.

Perhaps surprisingly, I have not had much to say about the historicity of the people and events to which the biblical narrative purportedly refers. Did these people really exist? Did these events actually happen? Someone got in touch recently, however, using the contact form, with this rather complex but important question:

…as I see it, the plot-line of the Hebrew Bible is largely an exilic/post-exilic literary construct with little historical grounding which thereby undermines a narrative-theological approach since such an approach is in effect basing itself upon a literary construct rather than ‘what really happened’. So whilst I see great value in a narrative-theological reading to explain what Paul thought, for example, I struggle to see how the narrative itself provides anything normative for the contemporary world. Obviously I am not intending to imply that the narrative has no value for the contemporary world, but just that its story, as a literary construct, carries little normative force: how can I place myself into the fifth Act of a story I know to be divorced from historical reality?

The point is this: if the narrative is tied so firmly to history and if substantial parts of the narrative appear not actually to have happened, then surely the authority of the narrative for the church today is seriously compromised. It’s no use to us. I don’t imagine that we can resolve the problem of historicity entirely, and the whole thing needs a lot more thought; but it does seem to me that the narrative-historical paradigm points to a rather different way of assessing the relation between text and “history”.

The narrative-historical hermeneutic has two legs—narrative and history. If the history leg gets injured and needs to be amputed, the hermeneutic will have either to use the crutch of a dogmatic theology or to hop along as best it can on its narrative leg until eventually it gets tired and falls over. A narrative theology that treats scripture as a grand meta-allegory is ultimately non-realistic and incoherent—a story about the intervention of God in history that doesn’t need history—and will not sustain the historical existence of the people of God. 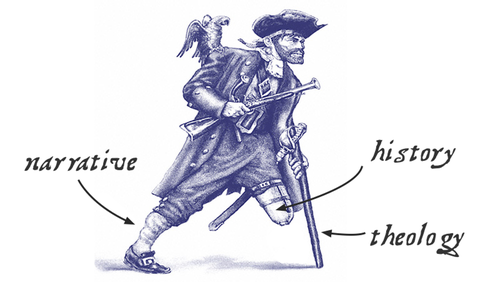 So I don’t think it’s a solution to give up on the historical problem and just treat scripture as narrative alone, though that seems to me to be precisely what much modern evangelical “narrative” theology does. We tell the “big story” of how God created and is in the process of redeeming this world with little thought for the historical outlook and concerns of the biblical communities.

Nor is it an option to argue that only the death and resurrection of Jesus really matter as historical events—the world-changing moment of divine intervention, the turning-point of human history. We have learnt over recent years that the death and resurrection of Jesus cannot be understood apart from the story of Israel—and I have tried to add to this new perspective the point that the story continues beyond Jesus into the future of the people of God.

Perhaps the main problem I have with the question is this. It appears to assume, in rather traditional fashion, that the text has epistemological priority and that this priority depends on the text being true in all important respects, including in its account of historical events. The Bible is taken to be foundational for the life and mission of the church, so if it turns out that the foundation is structurally unsound—if we conclude, for example, that the Old Testament narrative is “largely an exilic/post-exilic literary construct with little historical grounding”—then whatever we build on it is bound to collapse.

I would argue, more or less in the opposite direction, that the “authority” or validity of the Bible for the church depends not on its relation to the people and events to which it refers but on its relation to the community that told and reflected upon its story in this way. It is the people of God that has epistemological priority, not the text. This is also a properly historical relation, but not one that makes us hostage to foundationalism.

So the question to ask as we think about locating ourselves in Wright’s fifth act is not “can we trust the preceding narrative as an account of how things actually were?” but “how do we tell this story as our own story?” The raison d’être of the church is not the Bible. It is our concrete continuity with the community that in the period—let’s say, conservatively—from the exile to the end of the first century AD told this particular story about itself. The Bible is how the community made sense of its existence. The New Testament is how part of that community made sense of its existence during a critical, transformative period.

The past, present and future of biblical story-telling

I then suggest that we should look more closely at the tripartite form of biblical story-telling—past, present and future. This is a bit speculative. I’m not sure where it takes us.

1. Even if we accept that the pre-exilic history of Israel is “largely an exilic/post-exilic literary construct”, we can still ask appropriate historical questions about how and why that story was told. We may doubt that the Gospels give us a fully reliable historical account of what actually happened, but it is still a matter of immense historical-theological importance that these texts, which are clearly constituted of pre-existing material, emerged in the second half of the first century. It is not really open to doubt that historical communities, at this stage in their development, told these stories to account for their existence, identity, and purpose.

2. A significant part of the story is told in the present. We have no particular reason to doubt that Jeremiah wrote for the exilic community, or that the author of Daniel 7-12 was living through the crisis provoked by Antiochus Epiphanes’ assault on Judaism. We accept as more or less historically true that Paul had some sort of transformative experience and then pursued a mission across the Greek-Roman world based on the proclamation that his God had raised Jesus for the dead. These texts have a different kind of credibility and authority—they are largely unproblematic eyewitness accounts of what was happening. They are direct evidence for a community that told its story in these particular ways.

3. A key emphasis in my approach, finally, has been that the biblical communities project their story into the future, in a fully realistic fashion: the prophets foresee exile and restoration; Jesus and his disciples foresee judgment on Jerusalem and the renewal of the covenant; Paul and John foresee judgment on the pagan world and the eventual rule of God’s Son over the nations. New Testament eschatology does not merely provide a hypothetical back-stop to history. It is an attempt, in continuity with the manner of Old Testament prophecy, to unpack the implications of the past and present narratives for the future life of the people.

These three different types of story-telling are clearly going to be “reliable” in different ways. The reconstruction of the past is subject to the rules and constraints of ancient historiography. The present narratives have greater immediacy and credibility but they leave a lot unsaid and reflect only limited perspectives. The prophetic and apocalyptic narratives are a peculiar type of “fiction” that may or may not make sense with hindsight.

But in any case, what I think the narrative-historical hermeneutic teaches us is that the power of the texts lies in the act of story-telling and that it is by way of this self-definition of the community that we deal with the particular issues of historicity.

I come for the challenging narrative-based exegesis, but I stay for the illustrations and animations.

I think the answer to the question is no; it is irrelevant. The value of the bible lies in the nature that is NOT depending on events. Scripture is independant of events because it is about universal thruth, everlasting truth, worldwide truth. The narrative is there as an illustration of this common human relation with God.

Well, I don’t hear that view expressed very often. Do you think that’s true for all of the Bible, or do you regard some parts as true or possibly true?