Samuel Conner: I see radical contrasts. For…
Katapetasma: Jesus entered Jerusalem as…
Jon Hallewell: I’m not sure why but I…
Paul McGuire: Andrew, I’m sure you have…
Andrew: Well, a couple of points in…
END_OF_DOCUMENT_TOKEN_TO_BE_REPLACED

Some women and the story of God’s people, and a brief obituary

Gender and sexuality
Hermeneutics and narrative

Elkanah had two wives. Peninnah has children, but Hannah has no children. Elkanah favours Hannah, but Peninnah “used to provoke her grievously to irritate her, because the Lord had closed her womb”. At the temple in Shiloh Hannah prays that the Lord of hosts will look on the affliction of his servant and give her a son. Eventually the boy Samuel is born, and when he is weaned, Hannah takes him to the temple and hands him over to the Lord. She then utters an impassioned prayer: “My heart exults in the Lord; my horn is exalted in the Lord. My mouth derides my enemies, because I rejoice in your salvation…” (1 Sam. 2:1).

Apart from an inaccurate reference to the barren woman who has “borne seven” (Hannah appears only to have had six children: 1 Sam. 2:21) the prayer has no real contextual relevance. It is not Hannah’s prayer, it is not about her. It is a psalm, most likely taken from some other context and put into Hannah’s mouth, perhaps because of the reference to a barren woman. Klein writes:

The tone of the poem is national, alluding to male enemies and military metaphors…, neither of which are appropriate to Hannah. The final prayer for the king is impossible for Hannah: her son Samuel, as an old man, held earthly kingship to be a rejection of Yahweh’s kingship.1

Mary’s Magnificat appears to be a rough reworking of Hannah’s prayer (Lk. 1:46-55). She acknowledges that God has “looked on the humble estate of his servant”, but what she gives voice to is again a psalm of national-political celebration. The God who has done great things for her has demonstrated his power throughout the ages for the sake of his “servant Israel”, scattering the proud, bringing down the mighty from their thrones, sending the rich away empty, but lifting up the humble and filling the hungry with good things. The birth of Jesus will simply be part of that narrative. As the angel tells Joseph, he will save his people from the catastrophic national consequences of their sins (Matt. 1:21). 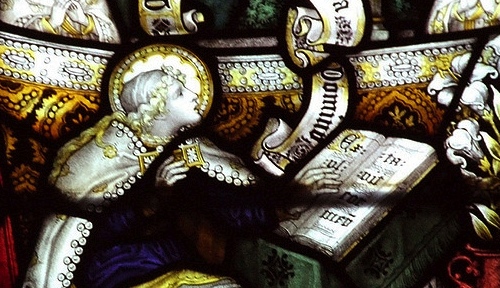 The widow Anna, 84 years old, approaches Joseph and Mary in the temple and gives thanks to God for the child. She speaks of him to all who have been waiting for the redemption of Jerusalem. The Lord has said to Jerusalem: “You were sold for nothing, and you shall be redeemed without money” (Is. 52:3). Anna understands that Jesus will bring Israel’s exile finally to an end. She is a woman of narrative-historical faith.

A Canaanite woman has the effrontery to beg Jesus to deliver her daughter from a demon (Matt. 15:21-28). At first Jesus refuses even to speak to her. Then he rebuffs her with the words, “I was sent only to the lost sheep of the house of Israel”, which can only be understood in narrative-historical terms. On her knees the woman pleads with him: “Lord, help me.” No, he replies, it is “not right to take the children’s bread and throw it to the dogs”. Her response astounds him: “Yes, Lord, yet even the dogs eat the crumbs that fall from their masters’ table.” In this small way this foreign woman has grasped the fact that the nations may benefit from the salvation of Israel. Jesus commends her great faith, and her daughter is healed.

In the temple Jesus teaches his disciples to beware of the scribes, who, among other sins, “devour widows’ houses” (Mk. 12:38-40). They will “receive the greater condemnation”. Sitting opposite the treasury he then remarks on the poor widow who put two copper coins, all that she had, into the offering box—far more than the wealthy who had given out of their abundance. Directly, they leave the temple, and Jesus tells his disciples that these stupendous buildings will soon be thrown down by an invading army. This is how the God of Israel will judge the unrighteous. He will scatter the proud, he will bring down the mighty, he will ruin the rich and powerful, but he will raise up, from amongst the humble and poor, such as this widow, a new people.

Having described at some length the coming judgment on Jerusalem, Jesus tells the story of a widow who persists in her demand for justice from an unrighteous judge (Lk. 18:1-8). In the end the judge relents and gives her what she asks for. In the same way, Jesus says, God will give justice to his persecuted elect when they cry out to him. They will not have to wait too long. The Son of Man will come and they will be vindicated for their loyalty to him—within a generation. This fictional widow stands for the company of Jesus’ disciples who have been chosen to proclaim to Israel the impending crisis of judgment and restoration.

My mother, finally, was a woman of simple faith. Over the last six months she repeatedly asked the Lord to look on the affliction of his servant and take her to be with him. On Monday he relented and answered her prayer. In her small, barely noticed way she was part of the still unfolding story of the people of the God who judges the ends of the earth.

I am sorry to hear about the loss of your Mother.  It is always a very painful time for a family no matter what the circumstances are.

May God’s grace abound to all of you.

In your unique un-orthodox but deeply biblical way you have offered a beautiful tribute to your mother. I understand I am basically a complete stranger (odd how the Internet makes connections and changes perspectives). Nevertheless, I am sorry for your loss. Thoughts and prayers for your family.

I am sorry for your loss.

I am sorry about your loss Andrew.

It doesn’t alter the point you are pursuing, but Hannah’s prayer does not need to be seen as an interpolation. It is an example of prophetic prayer. Another example is Habbakuk 3, where what begins as a prayer of petition (about God renewing his historic acts of power) turns into prophecy. In prophecy, in the OT and NT, surprising things come out of people’s mouths.

“The barren has borne seven” does not need to be taken as a literal self-reference, but as an example of God’s overwhelming favour to the despised and needy, where seven is the completion of a series. It’s poetry, but none the less true for being poetry. It’s who God is. God’s favour is personal as well as political - personal before it’s political, perhaps.

The context of the prayer is the world, not just Israel (vs. 8, 10). In terms of the narrative, the king was David, yet at the same time more than David. The prophecy is relevant in the light of the editorial on kings in the conclusion of Judges, and not an anachronism.  Hannah’s prophecy includes the coming of a king greater even than David. Jesus came as the king who turned the narrative upside down, as far as Israel was concerned, but it remained deeply political, of course, and world changing.

I was sorry to hear of your mother’s death, and add my sympathy to those already posted.

Same-sex same old story?
Jesus Have I Loved, But Paul? Chapter 6: Women in the Story of God
Polysemy, pre-eminence, and patriarchy in Paul
Now available! Hell and Heaven in Narrative Perspective (second edition)

Jesus and the Capitol Hill mob
Now available! Hell and Heaven in Narrative Perspective (second edition)
Progressive Christianity and the narrative-historical method
A happy disappointing Christmas to everyone!
Podcast: Talking with Lynsey and Stuart Gilmour about an “alternative” approach to mission in Scotland
Podcast: The ends of the ages: church in the Anthropocene
What did Paul mean by the groaning of creation? Does the argument work today?
New Testament eschatological texts categorised by horizon
END_OF_DOCUMENT_TOKEN_TO_BE_REPLACED