Keith Wansbrough: Looks good now, thanks. The…
Andrew: Thanks, Keith. It was…
Keith Wansbrough: The chart didn’t appear for…
Juanita: Hi there Sam We spoke…
Andrew: David, many thanks for this…
END_OF_DOCUMENT_TOKEN_TO_BE_REPLACED

Cleanthes’ “Hymn to Zeus” and the renewal of monotheism (3 comments)
Conversation with Mike Bird about In the Form of a God (0 comments)
Answering Mike Bird about the referent of "all things" in 1 Corinthians 8:6 (0 comments)
Interview: The Preexistence of Christ and Narrative Historical Theology (1 comment)
END_OF_DOCUMENT_TOKEN_TO_BE_REPLACED

What happens at the end of Revelation?

A comment by Chris Jones in response to something I said about the difference between the coming of the kingdom and the (supposed) redemption of the cosmos has had me looking at the sequence of events at the end of Revelation again.

My view hitherto was that after judgment on Rome we have a thousand year period when Christ reigns with the martyrs, followed by a final judgment of all the dead, and the appearance of a new heaven and new earth. John then has two visions of the holy city, the new Jerusalem, descending from heaven to be at the centre of this new creation (Rev. 21:2-4, 21:9-22:5).

The closing conversation with the angel in Revelation 22:6-21 brings us back to John’s present. So when Jesus promises that he is “coming soon” (22:7, 12), he does not mean at the final judgment and renewal of heaven and earth but at the moment of judgment against Rome. This is where we started: “The revelation of Jesus Christ, which God gave him to show to his servants the things that must soon take place” (Rev. 1:1). 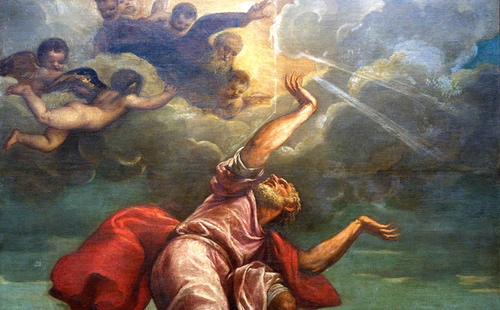 Now I’m wondering about that second descent of the holy city. Why does John see it twice? Is this the same as the first descent? Or is the context different?

Chris points out that in Revelation 22:5 it is said that “they will reign for ever and ever” and rightly, I think, infers that “they” are the “servants” of God, who worship him, mentioned in verse 3. This poses two related questions for my general argument about how New Testament eschatology works.

1. I maintain that a distinction needs to be made between kingdom and new creation: kingdom is relevant as long as there are enemies to be destroyed; new creation begins with the destruction of the last enemy, death—though because we live by the Spirit, we foreshadow that new creation as God’s people in the present.

But the phrase “will reign for ever and ever” in the verse that Chris highlights is a kingdom motif, so if the account of the new Jerusalem here belongs to the new heaven and new earth, my systematic distinction falls down. Even in the new creation there is reigning—that is, kingdom—going on, which contradicts my argument that where there are no enemies, there is no kingdom.

2. If these are all God’s servants—the saved, enjoying God’s new creation—then it cannot be maintained that only the martyrs or the suffering church will reign with Christ.

The “servants” (douloi) of God appear a number of times in Revelation. They are believers who have been called to take a stand for their witness to Jesus in the period of tribulation, quite possibly at the cost of their lives. The revelatory content of the book is given for their benefit (1:1; 22:6). They are sealed against the wrath that is coming on Israel (7:3). The prophets, who also suffered for their testimony, are “servants” (10:7; 18:20, 24; cf. Jas. 5:10). They are rewarded when the wrath of God comes (11:18). When Rome is judged, God avenges “on her the blood of his servants” (19:2).

That suggests to me that these “servants” are not believers in general but specifically the faithful church that suffers during this period of difficult witness. Like the martyrs who are raised in the “first resurrection”, they reign with Christ throughout the ages (eis tous aiōnas tōn aiōnōn)—not in a supra-historical eternity—that come after the climactic judgment on Rome.

So what are they doing “reigning” in the new creation?

In the first vision John sees the city descending because heaven has been opened to him (cf. Rev. 19:11). The circumstances of the second vision are more complex. He is carried away in the Spirit to a high mountain, and “one of the seven angels who had the seven bowls full of the seven last plagues” shows him the holy city Jerusalem again descending from God (Rev 21:9). This is not a vision of the city descending seen through a window into heaven. We are somewhere else. We are on a mountain. The city descends into John’s present realm.

One of the same group of angels had earlier taken John into the wilderness to show him the “judgment of the great prostitute who is seated on many waters” (Rev. 17:1). The holy city of 21:9 replaces the city which is Rome in the same visionary dimension.

The imagery signals strongly that this is a vision like Ezekiel’s vision of the restored temple:

In visions of God he brought me to the land of Israel, and set me down on a very high mountain, on which was a structure like a city to the south. When he brought me there, behold, there was a man whose appearance was like bronze, with a linen cord and a measuring reed in his hand. (Ezek. 40:2–3)

It would appear, then that this is a vision not of new creation but of the significance of the throne of God for the world following judgment and the restoration of his people. It is the same city but in a different time and space. It is not accidental that the angel who shows him the city descending on a mountain is the angel who showed him the judgment of the “great prostitute”.

This city is not just a new Jerusalem; it is a new “Rome” from which YHWH will “rule the nations with a rod of iron” (cf. Rev. 19:15). But it will also be a source of healing for the nations that had suffered under Roman domination.

Is it possible that the “forever and ever” is just hyperbole?  I mean, things happening “forever” is not an uncommon thing in apocalyptic literature.  Edom is supposed to burn forever, etc.

Yes, it probably is hyperbole in many cases. I have tended to think it means “for the duration of whatever period is relevant in the context”. Exodus 21:6 speaks of a master boring his slave’s ear with an awl against a door post, “and he shall be his slave forever (lʿlm)”. That presumably means for the lifetime of the slave or master. Hannah tells her husband that she will take her son to dwell in the house of the Lord at Shiloh “forever” (1 Sam. 1:22). In other words, we have to look to the context to determine what “age” or “period” is in view, whether or not there is any hyperbole.

I think it is in keeping with the Old Testament, Jewish apocalypticism, and the perspective of the church in the early centuries to suggest that Rome would not simply be defeated, it would be replaced by a new régime, a righteous and just “empire”, the empire of YHWH. Where before Babylon or Rome had ruled oppressively over the nations, in the future YHWH’s king would rule from Jerusalem:

I will tell of the decree: The LORD said to me, “You are my Son; today I have begotten you. Ask of me, and I will make the nations your heritage, and the ends of the earth your possession. You shall break them with a rod of iron and dash them in pieces like a potter’s vessel.” (Ps. 2:7–9)

In the Christian vision this will be achieved not through military force but through the faithfulness of Jesus, who died and was raised to the right hand of God, receiving authority to judge and rule over the nations, along with the martyrs. In other words, this new régime rules from a new Jerusalem, a Jerusalem above, in heaven. One benefit of this rule is that the nations that suffered under Rome’s tyranny will be healed (Rev. 22:2).

Are you saying that John’s vision of the ‘bride’, the Holy City in Revelation 21:9-22:5, is a heavenly vision of Jesus and His martyrs reigning now?

Yes, I think that would be the implication. It would explain the presence of the Lamb as a replacement for the temple: there is no need for the redemptive presence of the Lamb in the city when it descends to be part of the new creation in 21:1-8. It would explain the fact that the nations walk by the light of the city and are healed by the leaves of the trees. And it would explain the fact that the servants of God “will reign throughout the coming ages”. The vision harks back to 20:4-6: the martyrs are raised and will be both “priests of God and of Christ” (ie. servants) and will reign with Christ throughout the comign thousand year period. Why is the heavnely city seen to be descending? To show the concrete impact of its presence in the world.

Cleanthes’ “Hymn to Zeus” and the renewal of monotheism
Conversation with Mike Bird about In the Form of a God
Answering Mike Bird about the referent of "all things" in 1 Corinthians 8:6
Interview: The Preexistence of Christ and Narrative Historical Theology
How we got from kingdom to Trinity: Constantine and pagan monotheism
Jesus and Paul, works and faith
Some hazardous thoughts on the Trinity for a new year and a new era
Was it Roman custom for people to return to their home town for a census?
END_OF_DOCUMENT_TOKEN_TO_BE_REPLACED