Matthew: Thank you Aaron.  Your post…
Aaron Milavec: Let’s assume, for a moment,…
Aaron Milavec: When you ask, “Is this the…
Andrew: Good reading list, by the…
Kevin Holtsberry: Thanks, Andrew. That helps…
END_OF_DOCUMENT_TOKEN_TO_BE_REPLACED

Multifaith Matters Podcast: my conversation with the missiologist Michael Cooper about the narrative-historical method (0 comments)
What is the essence of Christianity? (6 comments)
How does the New Testament predict the future? (0 comments)
Who will be taken? Who will be left behind? Darn it, we’re all too late anyway! (2 comments)
END_OF_DOCUMENT_TOKEN_TO_BE_REPLACED

Who is the founder of the narrative-historical hermeneutic?

Craig got in touch with a couple of questions. He wants to know, first, what P.OST stands for. That’s straightforward and not very exciting. I ran a “collaborative” site called Open Source Theology from about 2002 to 2009. It was associated with the self-consciously postmodern rethinking that went along with the now defunct (I assume) “emerging church” movement. Increasingly I found myself diverging from the emerging line in the direction of what I regarded as a more cogent reading of scripture, so I started a personal blog and called it P.OST or postost.net—that is, post-Open Source Theology. Dull, eh?

Craig’s second question is more interesting and provides a good opportunity to try to locate my meagre contributions in the grand scheme of things:

Who is the founder of the narrative-historical hermeneutic you are advocating? (I recognize you to be an original thinker, but I am wondering who are teammates, so to speak, and/or what historical theological movement has this approach arisen from or out of).

I’m sure others have used the construct “narrative-historical” and it’s quite possible that I picked it up somewhere and slipped it in a mental pocket without noticing. But I think I got to it more or less independently and largely by trial-and-error. Anyway, it’s only a couple of words joined together, but I find it useful. It encapsulates my basic hermeneutical assumption, which is that what we have in scripture is, all the way through, the story that a historical community told over time about its concrete “political” existence.

This partly illustrates the point. At the start of his chapter in Beilby and Eddy’s The Historical Jesus: Five Views John Dominic Crossan writes:

The historical Jesus was a Galilean Jew within Judaism within the Roman Empire. That, for me, has always been the necessary methodological matrix rather than the unnecessary historical background for any discussion of that first-century figure. (105)

I part company with Crossan shortly after this, but I think he’s got this right. The standard evangelical model treats historical information about Judaism and Rome as flat, largely uninteresting background to the theological drama of Jesus’ incarnation, miraculous ministry, death and resurrection—the dull amateurish backdrop to a school play. A narrative-historical hermeneutic brings history into the foreground as the “necessary methodological matrix”. Neither Jesus nor the mission of the apostles to Israel and the nations can be properly understood apart from this matrix—it’s what keeps them frmo being myths.

The hermeneutic is at odds with the theological method that has dominated the church’s interpretation of scripture. But there is nothing new or original or exceptional about my argument. I am being swept along by a river that had its burbling headwaters in Weiss and Schweitzer at the end of the nineteenth century, that disappeared underground for a good part of the twentieth century, and which re-emerged and swelled to become a powerful torrent with what became known as the New Perspective on Paul and the Third Quest for the historical Jesus. The chart gives a rough impression—to the best of my limited understanding—of the major currents within modern critical scholarship that have produced the sort of hermeneutic that I have in mind. It suggests that Albert Schweitzer should be regarded as the “founder” of the narrative-historical method. Why not? 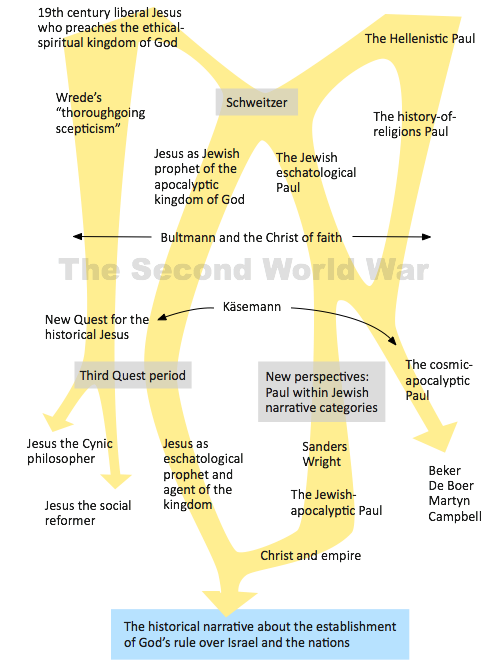 The key question at the heart of the developments represented here, to my mind, is: how does the eschatological or apocalyptic narrative of the New Testament relate to history? Does New Testament apocalyptic have in view a cosmic outcome that either brings an end to (Schweitzer) or otherwise transcends (Martyn, et al.) history? Or does it have in view historical outcomes—essentially political events in the life of God’s people? Or, I suppose, both?

My view is that within the Third Quest / New Perspective paradigm there is scope for developing a consistently, though not exhaustively, historical reading of the eschatological-apocalyptic narrative.

The convergence implied in the chart allows us to connect Jesus and the mission of the early church in a historically coherent and plausible narrative: 1) Jesus proclaimed and prepared for the coming of God’s kingdom as judgment on unrighteous Israel; 2) Jesus was vindicated for his obedience and was given authority to judge and rule on behalf of YHWH; 3) the apostles then proclaimed the significance of that vindication to the nations, believing that it would transform the ancient world, which, of course, is what happened.

I then argue that a properly evangelical theology is not something abstracted from this historical narrative and reapplied generally or universally in the form of doctrines but thought arising within the narrative, bound by the narrative, to which we now relate narratively. So words like “gospel”, “faith” and “justification” mean what they meant. The gospel in the New Testament was a proclamation to Israel and to the nations regarding Jesus’ crucifixion and resurrection. People believed in or had faith in the historical significance of this message. Jews and Gentiles were justified or would be justified—in a very normal sense of the term—for believing the proclamation and living in the light of the new future it entailed.

The task then—a massive one, I admit—is to reshape the practical mind of the “evangelical” church along such narrative lines. How, in concrete terms, do we keep living out this “political” narrative about the existence of a priestly-prophetic, new creation people in the midst of the nations and cultures of the world? Here we are going beyond the scope of New Testament scholarship, and I certainly don’t know of many people—either scholars or practitioners—who are trying to think through the implications of this sort of reconstruction of the historical narrative for the life and mission of the church today. But I am confident that it will happen eventually because, broadly speaking, the reading of the New Testament is so compelling. It’s just a matter of time.

“3) the apostles then proclaimed the significance of that vindication to the nations, believing that it would transform the ancient world, which, of course, is what happened”

A christological theme supporting your point of the “vindication” of Jesus’ obedience that is rarely given attention by evangelical theologians is in Acts (3x), Jesus the “Righteous One” (also in I Jn — 3x and Ja 5:6). This strand of christology was important to the apostles to explain why Jesus was vindicated…his righteous life (rather than his substitutionary death). What made Jesus attractive to the ancient world? And what would make him attractive to our modern world? His ethos, righteous life, I propose, not his sacrificial death. If the (anti-narrative) “substitution” formula so dominating the theological landscape shifted from “death” to “righteous life”, is there room in the narrative-historical approach for a more universally applied substitution of “righteous life”, Jesus for yours? Or at minimum, Jesus’ righteous life a pattern for Model Man? Would moderns find in Jesus’ life something more interesting, sth perhaps worth following? This is assuming those sharing such a message held his righteous life as more important than his sacrificial death and sought to pattern their lives after him, majoring on majors, not on abstract, universal minors.

What is the essence of Christianity?
How does the New Testament predict the future?
Who will be taken? Who will be left behind? Darn it, we’re all too late anyway!
Resurrection in the Old Testament: literal or metaphorical?
END_OF_DOCUMENT_TOKEN_TO_BE_REPLACED