davo: When the ordinary Jewish…
Mark Newton : What I don’t understand is…
Kevin Holtsberry: Very helpful summary. I…
Andrew: Thanks, for this, Richard…
Samuel Conner: Just starting into your new…
END_OF_DOCUMENT_TOKEN_TO_BE_REPLACED

In the form of a God: The Pre-existence of the Exalted Christ in Paul: what the book is about and why (2 comments)
Notes on J. Richard Middleton’s The Liberating Image: The Imago Dei in Genesis 1 (0 comments)
Our eco-theological blindspots and the climate crisis (0 comments)
Biblical hermeneutics and the destabilising of the world (0 comments)
END_OF_DOCUMENT_TOKEN_TO_BE_REPLACED

Craig Keener and the fallacy of mutual submission

Craig Keener, who certainly knows a thing or two, has written a piece on Jesus Creed reaffirming the common egalitarian argument that Paul prefaces the instructions to husbands and wives in Ephesians 5:22-33 with an exhortation to mutual submission. I count myself a dyed-in-the-wool egalitarian, but I am still not convinced that this interpretation is exegetically defensible.

We get off to a rather disconcerting start with Keener’s argument that Paul expected masters to obey their servants. How does that work? Well, Paul tells slaves to obey their masters in Ephesians 6:5 and then in verse 9 says that masters should “do the same to them”. In Keener’s view Paul has “expressed one of the most radically antislavery sentiments of his day”.

Paul is not telling the masters to obey their slaves “with fear and trembling”. That is simply a social impossibility—and Keener has to admit that no one in the first century would have taken Paul literally. Christian slaves should act as slaves (douleuontes) with a good will, as to the Lord, “knowing that whatever good anyone does, this he will receive back from the Lord, whether he is a bondservant or is free” (Eph. 6:8). The free master should act according to the same principle: knowing that he will receive back from the Lord whatever good he does. He should act towards his slaves, therefore, on the same basis: he should refrain from threatening, “knowing that he who is both their Master and yours is in heaven, and that there is no partiality with him”. The specific requirement is that he should not threaten, and he does so for the same reasons that the slave renders service with a good will. 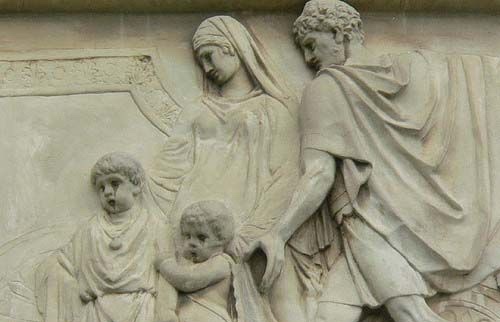 Keener thinks that this supposed instruction to masters to obey their slaves is not an accident because it comes under the rubric of mutual submission: “Paul frames his entire section of household codes around mutual submission.” But what about parents and children? Are we to suppose that Paul expected parents to “obey” their children on the grounds that this household relationship is likewise framed by mutual submission (Ephesians 6:1-4). Of course not. Children should obey their parents for the sake of covenantal continuity (it’s in the ten commandments), and fathers (why no reference to mothers here if Paul is such an egalitarian?) should “not provoke their children to anger”.

The reciprocal or mutual part is not in the structure of the relationship but in the fact that the unequal parties relate to their respective others in the Lord. They are part of a fellowship, a koinōnia—they have the Lord “in common”; and that fundamentally changes the way that they do household life in what remains unavoidably a patriarchal, slave-owning culture.

So Keener is right to stress that Paul revises the traditional “household code” in a quite radical fashion. He addresses both the stronger and the weaker parties, recognising that they have all become part of this new koinōnia in Christ. He does not instruct the patriarch to rule (which arguably went without saying) but to love, and to refrain from provocation and the threat of violence. But the claim that traditional authority relations are directly subverted by the participle clause in Ephesians 5:21 is, I think, going too far.

Paul has the worshipping community in view in Ephesians 4:15-20, and “submitting to one another out of reverence for Christ” is the last in a series of participle clauses characterising worship (“speaking… singing… making melody… giving thanks…). Indeed, the ESV reflects this by attaching verse 21 to the end of this paragraph:

…addressing one another in psalms and hymns and spiritual songs, singing and making melody to the Lord with your heart, giving thanks always and for everything to God the Father in the name of our Lord Jesus Christ, submitting to one another out of reverence for Christ. (Eph. 5:19–21)

The instruction to the wives in the community then assumes the repetition of the verb from verse 21: “Wives (submit) to your own husbands, as to the Lord.”

A first question: why “to your own (tois idiois) husbands”? Quite possibly because there was something in early Christian libertarianism that was threatening marriages. Similar concerns may lie behind the requirement that women should cover their heads when praying or prophesying because the “head of a wife is her husband”, or that women should keep quiet and ask their husbands when they get home (1 Cor. 11:3-4; 14:34-35). That may be a little speculative, but the emphasis on “your own” husbands makes it harder to relativise the submission of the woman.

In the parallel passage in Colossians, which has stronger claims to be genuinely Pauline, there is no suggestion of mutual submission: “Wives, submit (hupotassesthe) to your husbands… Husbands love your wives…”. Slaves are to obey their masters; masters must treat their slaves justly and fairly (Col. 3:18-4:1). The patriarchal order remains in place, it is taken for granted, but it is done differently.

Also, the analogy with the relationship between Christ and the church breaks down if we suppose that Paul is arguing for mutual submission between husband and wife. Paul states explicitly: “Now as the church submits to Christ, so also wives should submit in everything to their husbands” (5:24). That argument cannot be reversed.

The phrase “to one another” (allēlois) does not have to carry the idea of mutuality. When the town clerk in Ephesus addresses the crowds who have dragged Paul’s companions into the theatre, he says that Demetrius and the silver workers should take their complaints to the courts where they may “bring charges against one another” (Acts 19:38). The “against one another” (allēlois) reflects the confusion of the situation but the town clerk does not mean that the accusations should be reciprocal.

In the same way, “submitting to one another” presupposes the complex situation of the household: wives to husbands, children to parents, slaves to masters. Paul was very conscious of the fact that these are relationships within the one household. Submit as appropriate.

Paul was not a social revolutionary. His apostolic task was to build communities that would survive whatever “day of fire” may come upon them (1 Cor. 3:10-15)—or in the language of Ephesians, the wrath of God that would come upon the sons of disobedience, the “evil day” when the churches would need the whole armour of God if they were to stand against the schemes of the devil (Eph. 5:6; 6:13). In real terms, Paul was concerned about persecution.

Paul’s “household code” is framed not by a modern, post-Enlightenment, liberal appeal for mutual submission but by acute apocalyptic expectation. It’s what the Letter is about. [pullquote]The passage should not be taken out of context and tricked into conforming to our own ethical standards.[/pullquote] Paul did not need to overturn the prevailing patriarchalism of his culture, but he did need to ensure that these communities faithfully and consistently embodied the lordship of Jesus during the intensifying eschatological crisis of the end of the age of classical culture.

Does that mean that we have no choice as Bible-believing-Christians but to tolerate or require the same patriarchy-as-to-the-Lord today? No. At least, my argument in Speaking of Women: Interpreting Paul was that Paul’s language in this passage makes it clear enough that he regarded patriarchy and slave-owning not as divinely sanctioned norms but as social conditions that needed to be lived with. Fortunately, we don’t have to live with them any more.

This seems a very sane criticism of the argument. We’re still having to speculate though about the precise background to Paul’s injunctions, not simply on wives and husbands, but also the ‘headship’ argument. On the latter, here’s a thought. What if the “headship” was not primarily about authority (as we tend to read it) but the head caring for the body? If Jesus is head over the church, it might be better to think of it this way, rather than Jesus being in authority to give commands to the church. Which of course he does, but this may not be what is implied in this argument.

In the form of a God: The Pre-existence of the Exalted Christ in Paul: what the book is about and why
Why does Jesus give the kingdom back in the end and become subject again to God?
Why did the Jews accuse Jesus of making himself equal to God?
Why did Jesus instruct his disciples not to preach the kingdom of God to Gentiles and Samaritans?
Was Gehenna a burning rubbish dump, and does it matter?