toddh: Very interesting, that…
Andrew: Agreed. We may not be able…
davo: It is not clear that Adam…
Samuel Conner: Thank you, Andrew. I must…
Spring blossom : Luke 4:17 The scroll of the…
END_OF_DOCUMENT_TOKEN_TO_BE_REPLACED

How to pray the prayer of Jabez (0 comments)
Falling sideways: why not much changed when Adam and Eve sinned (3 comments)
How did Jesus’ disciples imagine that he would “redeem Israel”? (18 comments)
Why the outpouring of the Spirit on the day of Pentecost marked an end, not a beginning (3 comments)
END_OF_DOCUMENT_TOKEN_TO_BE_REPLACED

Celibacy, marriage, and the end of the age

Something that struck me reading Two Views on Homosexuality, the Bible and the Church was the general agreement that Paul’s views about marriage change between 1 Corinthians 7 and Ephesians 5.

In the earlier passage he expresses a strong preference for celibacy but at the same time gives a “shockingly egalitarian” (DeFranza) account of marriage. By the time we get to Ephesians Paul—or a well-meaning pseudepigraphist—appears to have lost interest in the celibacy option and promotes a strongly patriarchal view of marriage as a “mystery” pointing to the relationship between Christ and the church. 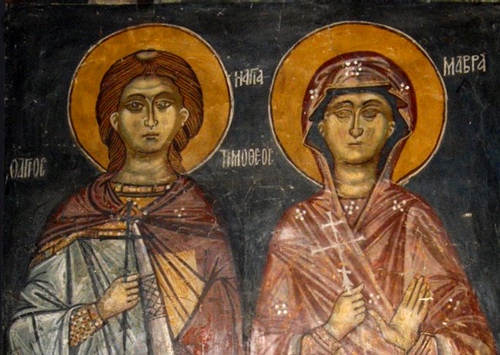 These contrasting emphases are then exploited—in complex and nuanced ways—by the contributors in support of their respective views on marriage. Stephen Holmes, for example, discusses how the early Christians struggled to make sense of sex in the light of their new belief in resurrection. If death had been defeated, it would appear that there was no longer any need to marry and procreate.

They looked to the Scriptures for help, of course. Paul is interesting here: in 1 Corinthians 7 he seems to say straightforwardly that his celibacy is better than marriage, although allowing that “it is no sin” to marry (7:36 NRSV) and indeed that those who struggle with sexual continence should marry (7:9). In Ephesians 5, however, marriage has become something apparently usual and assumed (5:33), with the Genesis mandate reaffirmed (5:31), and has become an image of Christ’s love for the church (5:32). (170)

This could, Holmes admits, simply reflect a decline in eschatological expectation, but he goes on to claim that the Augustinian account of the “goods” of marriage (children, faithfulness and sacrament) constitutes a robust and coherent framework within which to deal with the tensions in Paul’s teaching.

Likewise Wesley Hill argues that it is unlikely that we would arrive at Augustine’s view on the basis of 1 Corinthians 7 alone.

Rather, it is only when we attend to the final form of the Pauline letter collection, in which we find Ephesian’s robust affirmation of marriage and the expectation of a growing Christian household that includes children, that we are able to take Augustine’s view seriously as a fulsome Christian position. (208)

The assumption is that there has been some sort of development between the two positions, and the theological question has to do with how it should be resolved. None of the contributors gives any weight to the narrative setting—note Holmes’ dismissal of the failure-of-eschatological-expectation argument. But I would argue that eschatological expectation is critical for understanding both passages—and in a way that suggests that they have a lot more in common than the contributors to this volume seem to appreciate.

The eschatological setting is easy enough to demonstrate in the case of 1 Corinthians 7. At the start of the letter Paul makes the point that they have the resources, the spiritual gifts, that they need to sustain them to the end, “guiltless in the day of our Lord Jesus Christ” (1:4-8). They are reminded, moreover, that “God is faithful, by whom you were called into the fellowship of his Son, Jesus Christ our Lord” (1:9).

So here’s the narrative that controls the whole letter: they have been called and equipped by God to live, bound as a community to the Son who suffered and was vindicated, in such a way that when the Lord Jesus comes to be received as king by the nations, they will be found guiltless. As is well known, the letter concludes with the prayer maranatha, “Our Lord come!” (1 Cor. 16:22).

He is not giving us a proto-Augustinian definition of marriage. He is mapping the eschatological significance of marriage as a pattern for the “fellowship” of believers with the Son who will sustain and vindicate them.

The relevance of the narrative for the teaching of chapter 7 is obvious.

Unmarried people are better off single, families are better off without children, slaves are better off staying as they are—not because marriage, children and freedom are bad things but because the Christian community is about to go through an extremely difficult and distressing period as they bear anti-social witness to the coming judgment on the pagan world.

The days are evil

Ephesians is not less eschatological in its outlook and argument than 1 Corinthians.

The instructions to husbands and wives, parents and children, masters and slaves, presuppose this narrative of differentiation, opposition, wrath, judgment, redemption, and participation in the future reign of Christ over the nations. The life of the Christian household would be a critical component in the endurance of these communities are intense pressure.

In 1 Corinthians 7 this awareness leads Paul to emphasise the value of celibacy. In the Ephesians 5 passage he focuses on the household. But the purpose is the same: to ensure that these communities remain intact and loyal through the coming eschatological crisis.

The church will fulfil its eschatological purpose if it submits to Christ, who loved the church, gave himself up for her, sanctified her, cleansed her… and here’s the critical point: “so that he might present the church to himself in splendor, without spot or wrinkle or any such thing, that she might be holy and without blemish” (5:27). That is a future prospect. It is a reference to the parousia—the day when Jesus will “come” to be confessed by the peoples of the Greek-Roman oikoumenē and to vindicate and reward those who remained true to their calling.

It is this eschatological relationship between Christ and his “body”—the community of those who are called to be Christlike—that Paul finds pictured in the relationship between the husband and the wife. He is not giving us a proto-Augustinian definition of marriage. He is mapping the eschatological significance of marriage as a pattern for the “fellowship” of believers with the Son who will sustain and vindicate them.

The metaphor of headship argues not for the authority but for the socially constructed prominence or priority of the husband. He is like Christ because Jesus, as the first to suffer and the first to be raised from the dead, the firstfruits of those who have fallen asleep, the firstborn among many brothers, has the same prominence and priority in the order of eschatological transformation and renewal (cf. 1 Cor. 15:20-23; Rom. 8:29).

In the analogy is a profound reassurance and encouragement for the ancient church. Just as the husband loves his wife, so Christ “nourishes and cherishes” the church, which is his body (5:29). The bond between the Christ who suffered and was vindicated and the church which must suffer in hope likewise of being vindicated is as powerful and as intimate as the bond between the husband and the wife, who become “one flesh” (5:31). This is the point that Paul really wants to drive home: “This mystery is profound, and I am saying that it refers to Christ and the church” (5:32).

So I see no reason to hold that the Pauline idea of marriage changed significantly between 1 Corinthians and Ephesians. The relationship between the apostle and the church may have changed, the rhetoric may have changed, but the basic argument remained the same. The Christian patriarchal household, with its children and slaves, needed to embody in itself the Spirit of Christ if the churches built around it were to bear consistent witness, under persecution, through to the day when Jesus would be confessed as Lord by the nations.

How to pray the prayer of Jabez
Why did Jesus instruct his disciples not to preach the kingdom of God to Gentiles and Samaritans?
James Tabor’s failed failed apocalypse of the New Testament argument
Why did the Jews accuse Jesus of making himself equal to God?
Did Jesus avoid proclaiming a “day of vengeance” against Israel in the synagogue in Nazareth?