Juanita: Hi there Sam We spoke…
Andrew: David, many thanks for this…
David: And, for further reading, I…
David: There’s a substance to this…
Arthur Davis: That, I think, is the…
END_OF_DOCUMENT_TOKEN_TO_BE_REPLACED

Answering Mike Bird about the referent of "all things" in 1 Corinthians 8:6 (0 comments)
Interview: The Preexistence of Christ and Narrative Historical Theology (1 comment)
How we got from kingdom to Trinity: Constantine and pagan monotheism (2 comments)
Jesus and Paul, works and faith (0 comments)
END_OF_DOCUMENT_TOKEN_TO_BE_REPLACED

Discipleship and the eschatological narrative of 1 Corinthians

I have to prepare some material about discipleship for a small leaders’ retreat. The approach I want to take is to frame discipleship narrative-historically. No surprises there. One way to do this is to take a very practical letter with strong discipleship content, such as 1 Corinthians, and try to show how the paraenetic material relating to disunity, sexual immorality, lawsuits, celibacy and marriage, food offered to idols, spiritual gifts, men and women, etc., is controlled by an overarching eschatological narrative. It is not generalised ethical-spiritual teaching; it is narratively contextualised; and we are likely to misunderstand Paul if we drive a wedge between the practical teaching about how to live and be church and the eschatological frame. By the same token, I will argue—but not here—that we cannot do discipleship properly today if we do not take into account our own unique narrative-historical context.

1. The churches are corporate signs of a new future for the ancient world

The church in Corinth is, almost by definition, a community of Jews and Gentiles who, along with other such communities, call upon the name of the Lord Jesus Christ (1:2). That is, they have come to believe—quite recently—both that Jesus is Israel’s Messiah (cf. Acts 18:5) and that he will soon come to judge the pagan world, turning it upside down, becoming king in place of Caesar (cf. Acts 17:6-7, 30-31).

The church in Corinth, therefore, is an eschatological community. It lives in the light of and for the sake of God’s new future, when it will be widely acknowledged that there are not many gods and many lords but one God, the creator of all things, and one Lord, Jesus Christ, the founder of the new world to come (cf. 8:6-7; cf. Phil. 2:9-11). 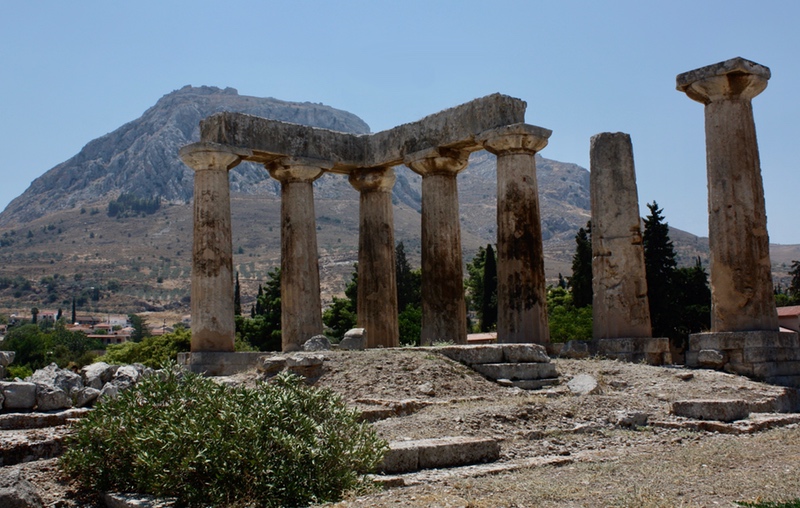 2. The testimony is that Jesus is Lord (and will judge and rule over the nations)

The “testimony about Christ” is specifically that God raised him from the dead and has given him the authority to function as Lord, and that he will be revealed to the world at some point in the not too distant future.

3. The testimony is underpinned by the Spirit

The validity of the belief in a coming new régime is confirmed on a daily basis by the experience of “spiritual gifts”—gifts of speech and knowledge in particular (1:5-6). Just as the Spirit gave the Jerusalem community the power to proclaim the coming judgment on Israel (Acts 2:14-36), so the Spirit is giving the churches in the Greek and Roman world the power to proclaim the impending judgment on classical paganism. Because they have the Spirit, they are able to affirm that Jesus is Lord and that he will reign over the nations in God’s new future. Scholars such as Larry Hurtado point out that it is charismatic insight that drives the high christology of the early church, but I would add to this that such a christology is inherently eschatological.

4. Until the day comes, the churches will face hardship and persecution

In the meantime the community in Corinth can expect to face upheaval and distress—the birth pains of the new age. The world as they know it is passing away (7:31), and they should adjust their behaviour accordingly (7:17-40). Chapter 7 gives us perhaps the clearest example of eschatologically conditioned discipleship.

In this narrative the “cross” is less the ground for atonement—though it is that—than a symbol for the persistent means by which the eschatological goal will be attained. This is evident notably from the fact that God has chosen the weak and foolish in Corinth, rather than the strong and clever, to bear witness to the coming transformation of the ancient world (1:17-31). The Lord’s supper affirms a “new covenant” on the basis of Jesus’ death that will define the community until he comes (11:23-26). The eschatological community is a cruciform community because there is no way to God’s new future other than the way of suffering.

5. When the new, post-pagan future arrives the churches will be judged and vindicated

On the day of the Lord, when Jesus is eventually revealed to the whole pagan world, the churches will be vindicated for their belief and perseverance. It will become apparent then whether the churches have lived consistently and effectively as harbingers, signal communities, portents of the age to come (4:5). Both the churches and the apostles will be commended and rewarded for their good work on that day—or not, as the case may be (3:13-15; 4:5; 9:27).

The current “rulers of this age”—in the first place, the political powers that “crucified the Lord of glory”—will pass away, to be replaced by the Lord Jesus, who will rule on behalf of the one true, living God (2:6-7). The wisdom that operated under the old Jewish-pagan system will be nullified by a wisdom of God through the Spirit (2:16). In the age to come, the churches will be in a position to “judge the world”, which is why they have to learn how to put their own house in order first (6:1-11). Historically speaking, this became a reality with the progressive conversion of the empire from Constantine onwards, though Paul presumably imagined it would all happen much more quickly.

The community that remains true to its eschatological calling will inherit the future kingdom of God; it will share in the age to come; it will be part of God’s new future for the ancient world (3:22; 6:9). The nations will confess that Jesus, and not Caesar, is Lord, and the churches will benefit from this new political-religious arrangement.

Salvation consists in becoming part of the redeemed and renewed people that will inherit God’s new future (1:18, 21; 9:22). Naturally, if they do not hold fast to the core testimony, they will not qualify for participation in the age to come and they will not be saved (15:2).

Christ will reign on behalf of God, at his right hand, until the last enemy has been defeated. Then he will deliver the kingdom back to the Father and subject himself to the authority of God, so that “God may be all in all” (15:24-28).

7. Paul’s apostolic task is to ensure that the church is fit for this purpose

Paul’s overriding apostolic-pastoral concern in the letter is to ensure that the church perseveres or survives as a credible witnessing community through to the “day” when the Lord Jesus will be revealed to the world.

So for the church at Corinth “discipleship” meant being prepared and equipped to fulfil the immediate eschatological purpose: to bear faithful witness to the coming judgment on the pagan world and the subsequent rule of Christ over the nations, which were understood to be guaranteed by the fact that God had raised his Son from the dead. No doubt parts of his teaching can be used more or less directly by the church today, but first we need to get our own story right.

Paul concludes the letter with the Aramaic petition marana tha, “our Lord, come” (16:22).

Discipleship in Corinthians? Why not go back to the gospels? Discipleship I’d think is about following a master who shows the way. The way of apprenticeship I should think is best explained in terms of following after the master, not other great “followers” (i.e. Paul). Be that as it may, you’re seem to be forced to craft a talk about “discipleship after a disciple of Jesus” (but why?). Paul’s attempts in I Cor to set the community straight in “discipleship” might have some value, but the stream is always better near the source.

But surely, Charles, the situation that we are in today is more like that of Paul’s churches than that of the Jewish disciples in the Gospels? We have not been called to follow a Jewish rabbi around as he proclaims to Israel that the kingdom of God is at hand. We serve God in communities which confess that Jesus is the risen Lord. There are still contextual differences—we are not in conflict with classical paganism, we live after Christendom rather than before. But I would suggest that the Gospels give us a very inadequate model for “discipleship” (I’m not sure it’s the best term to use) today. Paul, significantly, does not urge the churches to emulate Jesus’ disciples. He doesn’t send them out to proclaim the kingdom of God, heal the sick, and cast out demons.

This was a great answer Andrew. Thank you

Yes we haven’t been called to follow a Jewish Rabbi, have we not been called to obey his teachings in some universal sense? Or were they merely for his followers of that period? What should we make of Paul when he says “follow me as I follow Christ”? If we are to proclaim Jesus as a risen Lord, I shouldn’t his commandments should have some bearing and authority over our lives? Otherwise what do you think it mean to proclaim Jesus is Lord? Just in some abstract declaration of who is really Lord over all nations? Where does that get communities of followers and where does the secular world get if they don’t agree with that message? I appreciate the your emphasis on getting the context correct for modern application of the eschatological narrative of the scriptures, but unless I’m misunderstanding you, I believe you’re driving a pretty big wedge between Jesus and Paul

Andrew, ok I get it now, I read your post from 2009 about discipleship, I agree with your point there that maybe “discipleship” isn’t the right word anymore in light of modern-day post-Christendom communities. Perhaps you could follow through with that, be consistent, and title this post not about “discipleship from Corinthians” but “renewed people of God living in modern times”. By using unique phrases like this about post-Christendom communities, you’ll avoid confusion as I had when you used the term “discipleship.”

Interview: The Preexistence of Christ and Narrative Historical Theology
Answering Mike Bird about the referent of "all things" in 1 Corinthians 8:6
Some hazardous thoughts on the Trinity for a new year and a new era
Why did Jesus instruct his disciples not to preach the kingdom of God to Gentiles and Samaritans?
The throne of Jesus and the throne of God

Answering Mike Bird about the referent of "all things" in 1 Corinthians 8:6
Interview: The Preexistence of Christ and Narrative Historical Theology
How we got from kingdom to Trinity: Constantine and pagan monotheism
Jesus and Paul, works and faith
Some hazardous thoughts on the Trinity for a new year and a new era
Was it Roman custom for people to return to their home town for a census?
A Hindu asks a very good question about the death of Jesus and the salvation of Gentiles
What do the Christmas stories tell us about the pre-existence of Jesus?
END_OF_DOCUMENT_TOKEN_TO_BE_REPLACED