Andrew: Good reading list, by the…
Kevin Holtsberry: Thanks, Andrew. That helps…
Andrew: Should we not remain…
Andrew: Thanks for this Kevin…
Kent : Andrew, interesting, as…
END_OF_DOCUMENT_TOKEN_TO_BE_REPLACED

What is the essence of Christianity? (6 comments)
How does the New Testament predict the future? (0 comments)
Who will be taken? Who will be left behind? Darn it, we’re all too late anyway! (2 comments)
Resurrection in the Old Testament: literal or metaphorical? (0 comments)
END_OF_DOCUMENT_TOKEN_TO_BE_REPLACED

Do not lead us into temptation: a mistranslation according to the Pope

The Catholic Church is unhappy with the line “lead us not into temptation” (mē eisenenkēs hēmas eis peirasmon) in the Lord’s Prayer (Matt. 6:13; Lk. 11:4). The problem is that it appears to attribute responsibility for a person falling into temptation to God. Pope Francis has said: “It’s not a good translation…. I am the one who falls. It’s not him pushing me into temptation to then see how I have fallen. A father doesn’t do that, a father helps you to get up immediately.” If anyone leads us into temptation, he suggests, it is Satan. So an alternative translation is being considered, something along the lines of “Do not let us enter into temptation”. 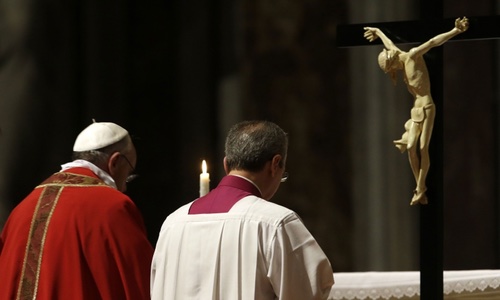 The difficulty arises because the Pope, like most modern interpreters, wants to read the Lord’s Prayer theologically and universally rather than historically and contextually. The prayer is given for a specific set of circumstances; it presupposes a precise eschatological narrative.

The Greek verb eispherō means to “bring in or into or to”: the Philistines “took the ark of the Lord and brought it into (eisēnenken… eis) the house of Dagon” (1 Sam. 5:2); Nebuchadnezzar sent for king Jehoiachin and “brought him to (eisēnenken… eis) Babylon along with the prize vessels of the Lord’s house” (2 Chr. 36:10).

Whether as a petition to God mē eisenenkēs can be translated in a permissive sense (“Do not let us enter…”) is debatable. There are numerous parallels in the Psalms which we happily translate in a way that ascribes direct authorship to God: “Do not turn man away to (mē apostrepsēis… eis) humiliation”; “I did what was just and right; do not hand me over (mē paradōis) to those that do me wrong” (Ps. 118:121 LXX). So I see no good reason to abandon the traditional rendering. Besides, the moral difference between “do not lead us” and “do not allow us to be led” is not great.

The difficulty arises because the Pope, like most modern interpreters, wants to read the Lord’s Prayer theologically and universally rather than historically and contextually.

The real problem, however, is not with the imperative but with the translation of peirasmon. What Jesus has in view is not general moral failure (the modern theological assumption) but the “testing” of the faith of his followers by persecution. The word peirasmos in this context refers to an “evil” or painful situation that tests the validity of a person’s faith.

We have a clear background to this sense in other Jewish writings:

Was not Abraham found faithful in temptation (en peirasmōi), and it was accounted to him as righteousness? (1 Macc. 2:52)

Child, if you come to be subject to the Lord, prepare your soul for testing (peirasmon). Set straight your heart, and be steadfast, and do not be hasty in a time of distress. Cling to him, and do not stand aloof so that you may be strengthened at your end. Anything that might happen to you accept, and in the vicissitudes of your humiliation be patient, because with fire gold is tested, and acceptable people in the furnace of humiliation. (Sir. 2:1–5)

No evil will befall him who fears the Lord, but in a test (en peirasmōi) he will also be delivered in turn. (Sir. 33:1)

Therefore, tyrant, put us to the test (peiraze); and if you take our lives because of our religion, do not suppose that you can injure us by torturing us. (4 Macc. 9:7)

But also Jesus teaches his disciples to pray in this way as part of the difficult and dangerous mission to Israel.

The Pope may have theological objections to the idea that God would lead people into temptation, but Matthew tells us that after his baptism Jesus “was led up by the Spirit to be tested (peirasthēnai) by the devil” (Matt. 4:1). The Spirit of God brought Jesus to be tested by Satan (Matthew adds “deliver us from the evil one” to the prayer) with respect to his newly acquired vocation: “If you are the Son of God….” The prayer is that the disciples will not be led into similar situations.

Later Jesus will warn his disciples: “Watch and pray that you may not enter into testing (mē eiselthēte eis peirasmon). The spirit indeed is willing, but the flesh is weak” (Matt. 26:41). The aorist subjunctive (eiselthēte) directly corresponds to aorist subjunctive of the petition. For God to “bring into” and the disciples to “enter into” testing are two sides of the same coin.

Peter will write about the various “trials” (peirasmois) that will test the genuineness of the community’s faith. They should rejoice “insofar as you share Christ’s sufferings, that you may also rejoice and be glad when his glory is revealed” (1 Pet. 4:13) .

You might think that this line of interpretation is contradicted by James:

Blessed is the man who remains steadfast under trial, for when he has stood the test he will receive the crown of life, which God has promised to those who love him. Let no one say when he is tested, “I am being tested by God,” for God cannot be tested with evil, and he himself tests no one. But each person is tested when he is lured and enticed by his own desire. (James 1:12–14, ESV modified)

James is talking about “trials” (peirasmois) which are for the “testing” (dokimion) of faith (1:2-3); those who pass the test of suffering will “receive the crown of life”. Under persecution no one should say that he or she is being “tested by God”. But this presupposes the distinction that goes all the way back to the testing of Jesus in the wilderness. God may or may not bring a person into a situation of testing, but the actual testing is a collaboration between the evil one and the person’s own desires.

The Lord’s prayer is not a piece of routine liturgical supplication. It is an urgent missional prayer, best illustrated by the parable of the widow who prayed for justice against her adversary. Jesus concludes: “ And will not God give justice to his elect, who cry to him day and night? Will he delay long over them? I tell you, he will give justice to them speedily. Nevertheless, when the Son of Man comes, will he find faith on earth?” (Lk. 18:7–8).

The petition not to be led into a time of testing has a very specific eschatological purpose—to keep suffering to a minimum. When it came, as it inevitably would, testing was the work of the devil, aided and abetted by sinful desires. But even then it had a positive value: it proved the genuineness of their faith, and if they passed the test, they would gain the crown of life, which is a reference to martyrdom and vindication at the parousia.

Thanks, Andrew. Totally agree on the Lord’s Prayer.

I’m not quite as warm to the interpretation of James. James says that being “lured” is due to one’s own desire. What’s more, it would seem like if James is depending on a distinction whereby God -leads- a person to testing, but the actual testing has nothing to do with him, wouldn’t that imply that, at least to the NT writers, there -is- a significant moral difference between allowing something to happen and performing it, yourself?

I’m not saying I have a great answer to bring the James’ passage and Jesus’ prayer together. Maybe James is trying to address a specific issue in his congregation and is heavily weighted to one side as a result.

Another way to look at it would be to say that James focuses on the inward aspect whereas Jesus has a more external perspective—the role of Satan, perhaps working through human opponents of the gospel. It may then make sense to say both that God is not responsible for the internal aspect and that he is responsible for the external aspect. The point is that these are two different theological equations, and we shouldn’t try and to resolve them into a single equation.

How does the New Testament predict the future?
Who will be taken? Who will be left behind? Darn it, we’re all too late anyway!
Resurrection in the Old Testament: literal or metaphorical?
Thom Stark on the coming of the Son of Man: the Bible gets it right, Jesus gets it wrong?
END_OF_DOCUMENT_TOKEN_TO_BE_REPLACED