Juanita: Hi there Sam We spoke…
Andrew: David, many thanks for this…
David: And, for further reading, I…
David: There’s a substance to this…
Arthur Davis: That, I think, is the…
END_OF_DOCUMENT_TOKEN_TO_BE_REPLACED

Conversation with Mike Bird about In the Form of a God (0 comments)
Answering Mike Bird about the referent of "all things" in 1 Corinthians 8:6 (0 comments)
Interview: The Preexistence of Christ and Narrative Historical Theology (1 comment)
How we got from kingdom to Trinity: Constantine and pagan monotheism (2 comments)
END_OF_DOCUMENT_TOKEN_TO_BE_REPLACED

“Jesus is Lord” before (and after) Trinitarian orthodoxy

I have no problem with Trinitarian orthodoxy as the product of a post-biblical, post-Jewish, post-apocalyptic rethinking of the relationship between Father, Son and Spirit, in the context of the construction of a new worldview for the Greek-Roman oikoumenē. I think that was probably, like Christendom itself, a natural and necessary development. 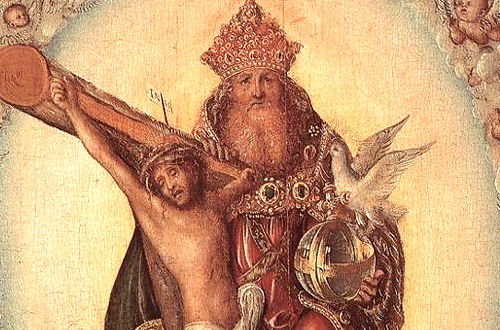 A narrative-historical approach, however, pushes back against the worldview-defining dominance of Trinitarian orthodoxy at two points.

First, it must safeguard the historical integrity of the New Testament texts, not by denying that Jesus came to be thought of as God but by bringing into sharp focus the pre-Trinitarian, apocalyptic story of Sonship, suffering and kingdom. New Testament christology should not be regarded as a first draft of the later creedal formulations. It had its own issues to deal with.

Secondly, a narrative-historical approach encourages the modern church to think narratively and historically—and prophetically and eschatologically—about the crisis of relevance with which it is confronted in the post-Christendom secular age. Simply put, I think we need the narrative about Jesus as Lord rather more than we need the dogma about Jesus as God. Notice that it is a relative argument, not an absolute one.

Typically the syllogism is assumed to be found to be operative where Old Testament texts that refer to God are applied to Jesus.

For example, Paul puts the argument to Jews in Romans that if they confess Jesus as Lord, they will be saved from the destruction that is coming upon Israel (Rom. 10:9; cf. 9:22). To support his argument he quotes Joel 2:32: “everyone who calls on the name of the Lord shall be saved”. In the Greek Old Testament “Lord” here is kyrios and clearly refers to God. So if Paul applies the verse to Jesus, it must mean that he considered Jesus to be God.

New Testament christology should not be regarded as a first draft of the later creedal formulations. It had its own issues to deal with.

The problem, it seems to me, with this superficially attractive line of reasoning is that it is not how the New Testament itself repeatedly explains the relationship between YHWH and kyrios and Jesus as kyrios. The New Testament gives an explicit and unequivocal account of why Jesus is confessed as Lord: YHWH made him Lord, gave him the authority to function as Lord.

So I agree with Hurtado’s conclusion that the reapplication of such Old Testament passages to Jesus connotes and presupposes “the conviction that in some profound way he is directly and uniquely associated with God”, but what determines that intimate association is not an assumed theological identification but an apocalyptic narrative about the enthronement of Israel’s king.1

The Lord said to my lord…

A good place to start is Peter’s Pentecost speech in Acts. The apostle quotes the same verse in Joel (Acts 2:21) as part of his explanation of the outpouring of the Spirit, but he concludes the ensuing argument about Jesus with the quotation of Psalm 110:1, which differentiates between the kyrios who is YHWH and the kyrios (ʾḏny in the Hebrew text) who is king:

Peter then directly restates the sense of the Psalm in terms of what has happened to Jesus:

Let all the house of Israel therefore know for certain that God has made (epoiēsen) him both Lord and Christ, this Jesus whom you crucified.” (Acts 2:36)

That would appear to mean that YHWH raised Jesus from the dead and gave him the authority that comes with the name “Lord”.

A rod of your power the Lord will send out from Sion. And exercise dominion in the midst of your enemies! With you is rule on a day of your power among the splendors of the holy ones. From the womb, before Morning–star, I brought you forth. (Ps. 109:2–3 LXX)

So what we have is both YHWH and his king acting with authority with respect to the nations according to their different roles. The narrative gives us the overarching “political” frame for understanding the early church’s acclamation of Jesus as kyrios—he would rule over the nations on YHWH’s behalf.

Paul’s speech in Athens is also relevant. God will judge the pagan oikoumenē but he will do it “by a man whom he has appointed; and of this he has given assurance to all by raising him from the dead” (Acts 17:31). Again, the distinction between YHWH as Lord and Jesus as Lord is transparent: YHWH acts as judge and king over the nations but he has appointed a man to carry out this judgment and rule on his behalf. There is no confusion of identities here. Jesus is closely associated with God, certainly—he is seated at his right hand. But they are not the same person.

The relevance of this connection for the interpretation of Romans 10:8-13 is evident: “if you confess with your mouth that Jesus is Lord and believe in your heart that God raised him from the dead…” (10:9). Jesus has been appointed Son of God, Israel’s King or Lord, on the basis of his resurrection from the dead; he has been given authority to act on YHWH’s behalf. If Israel confesses him as Lord and calls on his name, the nation will be saved, in precisely the sense intended both by Joel and by Peter.

Other passages could also be adduced. God has “bestowed” (echarisato) on Jesus the name which is above every name, which I take to be the name of “Lord” (Phil. 2:9). God raised Jesus from the dead and “put all things in subjection under his feet” (1 Cor. 15:27), seated him at his right hand, and “put all things under his feet” (Eph. 1:22). Jesus has been “appointed heir of all things”, he has becomeor been born higher than the angels, he has “inherited” a more excellent name, he was “begotten” by his resurrection, he has been give the throne of God, he has been instructed to sit at the right hand of God until God makes his enemies a footstool for his feet, God has subjected the world to come to him (Heb. 1:2, 4, 5, 8, 13; 2:5).

Most of these texts, one way or another, draw on the thought in Psalms 2 and 110 that God would establish his king and give him authority to rule in the midst of the nations. I suggest that it gives us the narrative-apocalyptic basis for the general reassignment of Old Testament YHWH texts to Jesus.

Ceslas Spicq: “Let every tongue proclaim that Jesus Christ is Lord,” that is, God. Such is the object of faith profession and worship: “Believe in the Lord Jesus and you will be saved.” Henceforth, Christians are those who call upon the name of our Lord Jesus Christ, that is, who worship his divine majesty and implore his sovereign protection (Theological Lexicon of the New Testament, 2:350, Lord).

Not once is anyone commanded to call upon the name of the Lord in reference to King David.

This is true, but the difference is that Jesus has been installed as king not in Jerusalem but at the right hand of God. This is exactly Peter’s argument in Acts 2:22-36. David died and was buried. But David foresaw the resurrection of the Christ, knew that he would not be abandoned to Hades. It is because Jesus was raised up and exalted to the right hand of God that he was given the promised Holy Spirit to pour out. David “did not ascend into the heavens” but recognised that the Messiah would be given a greater authority and status. So Peter concludes: “Let all the house of Israel therefore know for certain that God has made him both Lord and Christ, this Jesus whom you crucified” (2:36).

So it is because of this exalted status, bestowed on Jesus (cf. Phil. 2:9), that it is his name on which people call to be saved rather than God’s (Acts 2:21).

And since the Lord Jesus is the proper recipient of prayer necessitates hat He fully knows the hearts of all which is the same thing as saying He is omniscient (God).

God the Father receives sacrifices of animals, agricultural goods, etc. That would be one example of appropriate worship to the Father that is never given to Jesus.

Can you direct me to the biblical texts that demonstrate the levels of superiority in various forms of worship?

proskynew can be rendered unto others besides God (Revelation 3:9).

Some Greek words are due unto God alone. Latreuw (Strong’s number 3000) is one such example. Even though it is rendered unto others (Acts 7:42; Romans 1:25) it is due unto God alone. The fact that the Lord Jesus is the proper recipient of latreuw demonstrates that He is God (Revelation 22:3).

Conversation with Mike Bird about In the Form of a God
Answering Mike Bird about the referent of "all things" in 1 Corinthians 8:6
Interview: The Preexistence of Christ and Narrative Historical Theology
How we got from kingdom to Trinity: Constantine and pagan monotheism
Jesus and Paul, works and faith
Some hazardous thoughts on the Trinity for a new year and a new era
Was it Roman custom for people to return to their home town for a census?
A Hindu asks a very good question about the death of Jesus and the salvation of Gentiles
END_OF_DOCUMENT_TOKEN_TO_BE_REPLACED