Ascension Day and the Coming of the Son of Man

I’m afraid I missed it, but yesterday was Ascension Day. Dang. Ian Paul, however, reposted a good piece making the important point that whereas John’s Gospel makes the crucifixion the climax of Jesus’ ministry, the New Testament as a whole pursues the narrative through the resurrection to the ascension and exaltation of Jesus. We often miss this emphasis because our tradition downplays it and because we don’t read carefully. Quite! 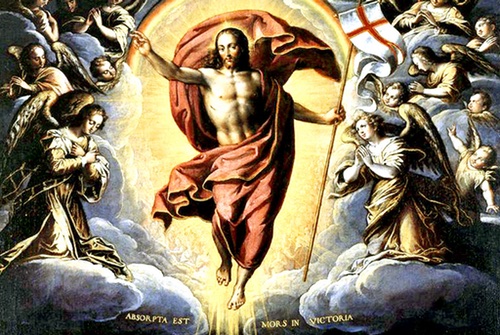 Ian attributes the failure of reading to our misunderstanding of Daniel 7 and its relevance for the New Testament. Daniel’s human figure is:

a personification of God’s own people, currently oppressed and persecuted by the powers that be, but trusting God who will rescue them, bring them into his presence, vindicate them and give them power and authority over those who currently have power over them.

So by identifying himself with this symbolic figure “Jesus is claiming to fulfil the destiny of Israel—to take on their oppression, but also to experience the vindication from God”.

That seems to me exactly right. The exaltation of Jesus to the right hand of God is the central apostolic proclamation—the good news for oppressed Israel and for the nations ruled by Caesar. Everything else flows from that.

I’m not sure about a couple of further details, however.

First, Ian thinks that Jesus’ use of Daniel 7 involves a “crucial re-interpretation as well: it is not the empires of this world that are the true oppressors of Israel, but the powers of darkness and their own sin and disobedience”.

That seems to me too sharp a distinction—an accommodation of the historical perspective of the New Testament to our more “rational” and generalised way of thinking.

On the one hand, the argument of Daniel 7-12 is precisely that Israel is oppressed because of sin and disobedience. Daniel confesses that “we have sinned and done wrong and acted wickedly and rebelled”, etc., therefore dreadful things have been done against Jerusalem (Dan. 9:5, 12). On the other, it is clearly understood that spiritual forces are at work behind the empires (Dan. 10:13, 20-21).

So I think we can affirm the relevance of Daniel 7 for understanding the ascension and exaltation without ditching the focus on the real political situation and Rome as the particular oppressor of Israel. In Revelation, of course, historical Rome—not “empire” in the abstract—is portrayed as a beast like Daniel’s fourth beast, which oppressed the saints of the Most High.

Secondly, Ian argues that the coming of the Son of Man with the clouds of heaven in the Synoptic Gospels must be differentiated from the coming of Jesus on the clouds at the parousia in 1 Thessalonians 4:17, for example.

He thinks that Jesus is speaking about the ascension when he says to the Council, “you will see the Son of Man seated at the right hand of Power, and coming with the clouds of heaven” (Mk. 14:62). This cannot refer to a second coming to earth 1) because it would mean Jesus was deluded (the Council didn’t live to see it), and 2) Daniel 7:13 describes a coming from earth to heaven.

I don’t think this argument works:

So Jesus expects that he will be raised in anticipation of the resurrection of righteous Israel (cf. Dan. 12:1-3) and seated at the right hand of God as Israel’s king (cf. Ps. 110:1) until the day when God judges unrighteous Israel, when Jesus will come to deliver his emissaries from their enemies and when those who have died will be raised to reign with him over restored Israel (Matt. 19:28; Lk. 22:30).

Viewed this way, the coming of the Son of Man event is not strictly to be associated with the ascension at all. It is “fulfilled” when either Jerusalem or Rome is “judged” and the suffering righteous (Jesus’ disciples, the churches in the pagan world) are vindicated. That keeps us much closer to Daniel’s vision.

Isn’t it a little late in history to still be saying that the Jews got what they deserved with the harrowing events of the destruction of Jerusalem?

1) This is an exercise in historical interpretation, not an expression of personal opinion. The question is whether Jesus and the writers of the New Testament thought that AD 70 was an expression of God’s wrath against his people.

2) Jesus and the writers of the New Testament were mostly if not all Jews. It was an intra-Jewish controversy, as it was in the Old Testament—AD 70 is in effect a re-run of the Babylonian invasion, which was unequivocally seen by the prophets as divine punishment for breaking the covenant. Other Jews in the post AD 70 period who were not Christian (see 4 Ezra and 2 Baruch) regarded the catastrophe in the same way.

The going and coming of Jesus with the clouds of heaven
The doctrine of the Second Coming and the restoration of the kingdom to Israel
Who or what will see the Son of Man coming in clouds? And where?
What did it mean to “see” the coming of the Son of Man in clouds?