Keith Wansbrough: Looks good now, thanks. The…
Andrew: Thanks, Keith. It was…
Keith Wansbrough: The chart didn’t appear for…
Juanita: Hi there Sam We spoke…
Andrew: David, many thanks for this…
END_OF_DOCUMENT_TOKEN_TO_BE_REPLACED

Cleanthes’ “Hymn to Zeus” and the renewal of monotheism (3 comments)
Conversation with Mike Bird about In the Form of a God (0 comments)
Answering Mike Bird about the referent of "all things" in 1 Corinthians 8:6 (0 comments)
Interview: The Preexistence of Christ and Narrative Historical Theology (1 comment)
END_OF_DOCUMENT_TOKEN_TO_BE_REPLACED

Last night I went to hear Steve Walton’s inaugural professorial lecture at St Mary’s University. The lecture was entitled “Doing Theology Lukewise: Luke as theologian and storyteller”. It was a straightforward demonstration of the theological depth of Luke’s narrative art. It was lucid, engaging, and I enjoyed it immensely.

One of the main points that Steve wanted to make was that, contrary to popular opinion, Luke has an atonement theology—it’s just that he constructs it narratively rather than as a matter of explicit theological assertion.

Steve had some interesting things to say, however, about how Luke interprets the death of Jesus in his Gospel through narrative detail: Jesus predicts his death, it is interpreted through scripture, much is made of his innocence, the Jewish authorities are shown to be themselves guilty of the charges brought falsely against Jesus, the man crucified beside him expects to be “saved” through the death of Jesus, darkness at noon is a sign of the “absence” of God, the tearing of the temple veil means that God has abandoned the Holy of Holies, and Simon of Cyrene carries the cross-beam as a sign that the disciples will attain glory only through suffering and humiliation.

That seems to me a reasonable analysis as far as it goes, though I’m not sure it amounts to an “atonement” theology as such. I would suggest that Luke’s account of Jesus’ death comes principally under the rubric of “suffering and vindication”.

Jesus is the righteous Son of Man who is opposed and defeated through the collusion of Jewish and Gentile authorities (cf. Acts 4:27), but who is vindicated by God, raised and exalted to a position of supreme authority, and who is therefore prototypical for the suffering and vindication of his followers. So, at his martyrdom, Stephen sees “the Son of Man standing at the right hand of God”, and prays as Jesus prayed: “Lord, do not hold this sin against them” (Acts 7:56, 60). 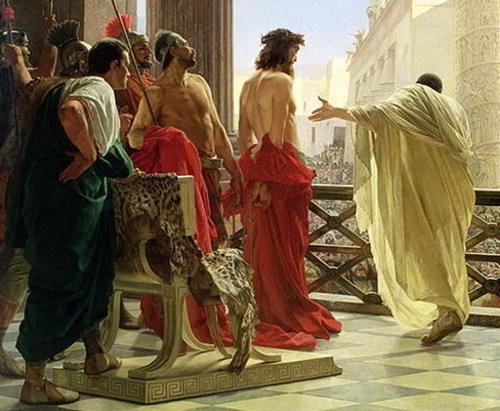 But Steve also proposed that the exchange of the innocent Jesus for the sinful Barabbas amounts to a theology of substitutionary atonement in narrative form (Lk. 23:18-25). I think there may be some point to this.

The Aramaic name bar ʾAbbãʾ means “son of the father”. A few manuscripts of Matthew 27:16-17 read “Jesus Barabbas”, which may explain Pilate’s “Jesus who is called Christ”. It seems much more likely that the common name “Jesus” was deleted because it was deemed confusing or offensive for Barabbas to have the same name as the other Jesus, who was called the Christ, than that a scribe added it at a later stage.

Either way, it may be that the name Barabbas evoked for Luke Israel’s relation to YHWH as father—for example: “Have we not all one Father? Has not one God created us? Why then are we faithless to one another, profaning the covenant of our fathers?” (Mal. 2:10).

But Barabbas was not just a representative Jew—and he was certainly not the generic sinful human waiting to be saved by the death of Jesus. He had been imprisoned, according to Luke, because he had taken part in an insurrection (stasin) against the Romans and had committed murder.

Josephus says that the Jewish people made an insurrection against Alexander Janneus at a festival, “for an insurrection (stasis) is especially sparked off at their feasts” (War 1:88). This is exactly the background for this Passover story.

John will describe Barabbas as a leistēs, who is released instead of the “King of the Jews” (Jn. 18:39-40). The two men crucified beside Jesus were leistai (Matt. 27:44). The word arguably means “insurrectionist”—or at least, the distinction between “bandit” and “rebel” was a hazy one.

Josephus calls the Sicarii, a notorious band of political assassins, leistōn: “there sprang up another sort of robbers in Jerusalem, which were called Sicarii, who slew men in the daytime, and in the midst of the city” (War 2:254). Paul was mistaken for a leader of this group: “Are you not the Egyptian, then, who recently stirred up a revolt and led the four thousand men of the Assassins (sikariōn) out into the wilderness?” (Acts 21:38).

Jesus accuses the authorities of having made the temple a den of “insurrectionists” (leistōn), perhaps (Lk. 19:46). He says to the men who came to arrest him in Gethsemane, “Have you come out as against a leistēn, with swords and clubs?” (Lk. 22:52). He is being treated as another Jesus Barabbas.

All this rather suggests that the Barabbas incident carries highly charged and relevant political overtones.

The innocent Jesus is substituted for the violent insurrectionist Barabbas. He suffers and dies in his place. But if this is Luke’s atonement theology, the narrative-historical context must be kept firmly in focus. In this story Jesus dies not for the sins of humankind, not simply for the sins of Israel, but for the sins of violent, rebellious Israel—the Israel that will, within a generation, rise up in revolt against Rome and suffer the dreadful consequences.

I’ve made the point before that his crucifixion by Rome anticipates the coming punishment of Israel by Rome and specifically the crucifixion of thousands of Jews during the course of the war.

But Luke perhaps also suggests that Jesus took on the appearance of the insurrectionist, having been arrested as a leistēs, substituted for Jesus Barabbas, and crucified between two leistai as a misguided pretender to the throne of Israel.

“Jesus took on the appearance of the insurrectionist”

First thought that popped into my head was Greg Boyd’s thesis. The God of the OT took on the appearance of a warrior God — the cost of covenanting with an aNE people. Something that can only be fully understood in light of Christ and the cross, and what Christ took upon himself — appeared as. Not sure where I stand on this, but anyway…sorry for the digression.

Perhaps Boyd would see the connection, but I really don’t buy the thesis—that the Jews mistook the true cruciform God for a violent and vindicative warrior? It sounds like just another form of Marcionite-Gnostic theologically motivated revisionism. Even the Gospels don’t allow for it. It’s always going to stumble over the texts as historical documents.

Cleanthes’ “Hymn to Zeus” and the renewal of monotheism
Conversation with Mike Bird about In the Form of a God
Answering Mike Bird about the referent of "all things" in 1 Corinthians 8:6
Interview: The Preexistence of Christ and Narrative Historical Theology
How we got from kingdom to Trinity: Constantine and pagan monotheism
Jesus and Paul, works and faith
Some hazardous thoughts on the Trinity for a new year and a new era
Was it Roman custom for people to return to their home town for a census?
END_OF_DOCUMENT_TOKEN_TO_BE_REPLACED