Andrew: Yes, Paul can speak of…
davo: To be sure Jesus’…
Andrew: That would take a bit of…
Peter: I’m curious about whether or…
Andrew: Good question. Answered here…
END_OF_DOCUMENT_TOKEN_TO_BE_REPLACED

Whose names are written in the book of life? (2 comments)
How “liberal” is the narrative-historical method? (10 comments)
Katherine Shaner on the danger of singular saviours (2 comments)
In the likeness of sinful flesh: some reflections for Holy Week (4 comments)
END_OF_DOCUMENT_TOKEN_TO_BE_REPLACED

Explicit and implicit christologies in Mark

Hermeneutics and narrative
Jesus and christology 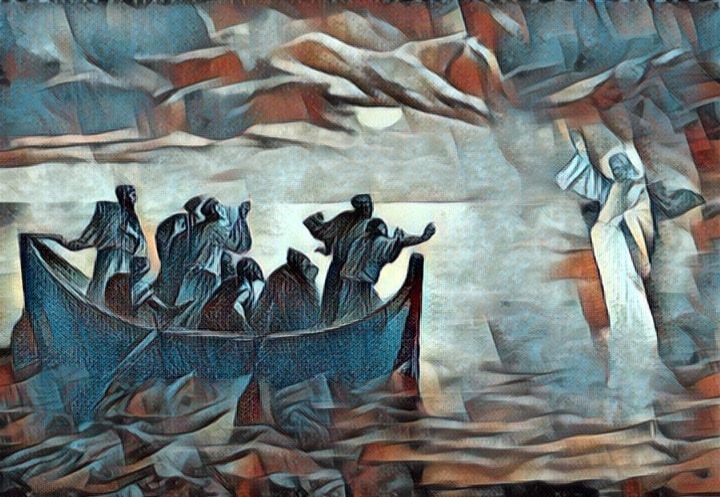 The explicit testimony concerning Jesus throughout Mark’s Gospel is that he is the beloved Son, empowered by the Spirit, who will serve the purposes of YHWH, who will suffer, who will be vindicated by his resurrection from the dead, and who will be seated at the right hand of YHWH, having received from YHWH authority to judge and rule over Israel and, potentially at least, the nations.

It is often argued, however, that there is also an implicit christology in Mark, which covertly identifies the “beloved Son” with YHWH himself. It is established to a large extent by detecting subsurface structures of meaning and reference, but the danger with that approach is always that our imaginations run away with us. I wonder if there isn’t quite enough happening on the surface of the narrative to account for the christological data.

Prepare the way of the Lord

Isaiah issues a call in the wilderness to prepare the way of the Lord (1:2-3), but then John the Baptist appears, preparing a way for Jesus. So are we to suppose that Jesus is the Lord who will suddenly come to his temple (Mal. 3:1), the God who is returning to Zion (Is. 40:3)? The interpretation is not without its problems. As Mark has constructed the quotation from “Isaiah”, YHWH speaks to Jesus (“I send my messenger before your face”), which makes the argument about identity rather difficult to sustain. The first part of the quotation is arguably closer to Exodus 23:20 LXX than Malachi 3:1, which would identify Jesus with Israel rather than with YHWH. And perhaps most importantly, Isaiah has the same shift of focus from the coming of YHWH to the appearance of a human servant, “my chosen, in whom my soul delights”, upon whom rests the Spirit of God (Is. 40:1). The Isaianic rationale is quite straightforward: when YHWH acts to restore his people and vindicate himself before the nations, he does so through the agency of a servant. Is there any reason to read Mark 1:2-11 differently?

Who then is this?

The story of Jesus calming the storm (Mk. 4:35-41) looks like a retelling of Psalm 107:28-29: “Then they cried to the LORD in their trouble, and he delivered them from their distress. He made the storm be still, and the waves of the sea were hushed.” But in the context of the Gospel the disciples’ astonished question “Who then is this, that even the wind and the sea obey him?” is given a clear answer, as we have seen already: he is the beloved Son, the Christ, the Son of Man who in due course will be seated in glory at the right hand of YHWH. If Mark intended his audience to hear an allusion to Psalm 107, the identity question can be satisfactorily answered according to the explicit christology: he is the obedient Son who has been empowered by the Spirit to act on behalf of, and exercise the authority of, the God of Israel.

Tell them what the Lord has done for you

Jesus instructs the Gerasene demoniac to go home and tell his family “everything the Lord has done for you and had mercy on you”, but the man instead “began to proclaim in the Decapolis everything Jesus did for him” (5:19-20). Some would see here a subtle identification of Jesus with YHWH, but it may just as well reflect a difference of perspective within the terms of the narrative. For Jesus it was YHWH who had done these things; for the former demoniac it was Jesus, who was in any case—consistent with the explicit narrative—the “Son of the Most High God” (5:7).

He came to them, walking on the sea

In the Old Testament it is, of course, YHWH who “walks on the sea as on dry ground” (Job 9:8 LXX; cf. Ps. 77:19, though this is a walking through rather than on the waters). Is Mark, therefore, likening Jesus to YHWH, identifying Jesus with YHWH? Perhaps, but the storytelling may lead elsewhere.

The disciples, naturally enough, are “utterly astounded” by what they have just witnessed, but this time the question of Jesus’ identity is not raised. Instead Mark draws a line back to the feeding of the five thousand: “they did not understand about the loaves, but their hearts were hardened” (Mk. 6:52). The line is reinforced by the peculiar and insistent narrative connection between the two stories: the disciples take up twelve baskets of leftover food, and then Jesus straightaway “compelled” (ēnagkasen) them to get into the boat and cross over to Bethsaida.

So what is the point of their failure to understand the loaves?

Jesus has compassion on the great crowd in the wilderness because “they were like sheep without a shepherd” (6:34). Ezekiel speaks of YHWH’s servant David, who will feed the weak, scattered sheep of Israel and be their shepherd once God has rescued them and judged their enemies (Ezek. 34:20-24). Before the appointment of Joshua as his successor Moses prays that God will appoint a man to lead the people so that “the congregation of the LORD may not be as sheep that have no shepherd” (Num. 27:16–17).

The disciples want to send the crowds away, but Jesus instructs them to feed the people themselves. He multiplies the five loaves and two fish, but it is the disciples who gather up twelves baskets of leftovers. Is he suggesting that it is their responsibility to shepherd Israel? Is he Moses handing over responsibility to his successors? Is that why he then goes up on the mountain to pray (cf. Num. 27:12)? It seems as easy to conjure up a Moses parallel as a YHWH parallel.

After the second feeding miracle, the disciples again fail to grasp the significance of the fact that several baskets of food were gathered up. Their obtuseness is beginning to look like “the leaven of the Pharisees and leaven of Herod” (8:15). The precise point is difficult to determine, but this is the theme that gets developed, and it does not obviously take us in the direction of a divine identity christology.

He meant to pass them by

The statement that Jesus “meant to pass them by” (ESV) seems inexplicable in the frame of the narrative. It has long been thought that there is a further allusion here to Job’s description of God: “If he passed over me, I would certainly not see him, and if he went by (parelthēi) me, I would not even know” (Job 9:11 LXX). Much has been made recently of Richard Hays’ discussion of the echo in Reading Backwards: Figural Christology and the Fourfold Gospel Witness. This would give the passage a theophanic character—except that Job’s statement is anti-theophanic: if God passed by him, he would not see him, he would not even know that it had happened.

Guelich thinks there is a reference to Old Testament epiphany texts in which God “passes by” Moses or Elijah (Ex. 33:19-23; 34:6; 1 Kgs. 19:11). So “instead of a story about Jesus’ rescue of his disciples who are distressed but not in danger (cf. 4:35–41), this is an epiphany story about Jesus’ self-revelation to his own followers”.1 This is backed up with an appeal to Jesus’ “I am” (egō eimi) statement, which is taken to insinuate an identification with YHWH’s self-revelation to Moses as “I am the one who is” (egō eimi ho ōn). But the self-revelation in Mark’s story is not that Jesus is God but that he is not a ghost, which fully accounts for Jesus’ words: “Take heart; it is I. Do not be afraid.” Why not just leave it at that?

Lane argues, further, that the admonitions to “take heart” (tharseite) and to “have no fear” (mē phobeisthe) which enclose the “it is me” are “an integral part of the divine formula of self-revelation”.2 But there is nothing exceptional about the language. Holophernes says to Judith: “Take courage (tharsēson) woman; do not be afraid (mē phobēthēis) in your heart, for I have not hurt any person who has chosen to be subject to the king of all the earth, Nebuchadnezzar” (Jdt. 11:1). So why do we feel compelled to find a “deeper significance” in Jesus’ statement, as Lane puts it? [pullquote]Is there not a danger of over-reading the text in the interests of maintaining theological orthodoxy or demonstrating exegetical ingenuity?[/pullquote]

The solution to the “passing by” problem may also be quite mundane. True, parerchomai commonly has the sense of “passing by”, but it can also mean “come to” or “come by” (BDAG s.v. 7; LSJ III: “pass on and come to a place, arrive at”). Luke speaks of the master who “comes alongside” (parelthōn) the table at which his servants recline in order to serve them (Lk. 12:37; cf. 17:7). Formally, this is the same as Jesus coming alongside the disciples in the boat in order to help them. I suggest that Mark means simply that Jesus intended to come alongside the boat but was stopped by the terrified cry of the disciples, who thought they were seeing a ghost. The clause kai ethelen parelthein autous should not be detached from the preceding sentence: “he came to them, walking on the sea, and he intended to come alongside them”. Lane approves of the translation “for he intended to pass their way”.3 Only once Jesus has reassured them that it is really him, and not a ghost, does he get into the boat with them. That’s the story that is tol.

In favour of a superficial reading…

There is a powerful and coherent explicit christological narrative in the Gospel that has been obscured and marginalised by theological readings of the text. We are currently obsessed with sightings of christological phantasms, but it seems to me that the surface narrative—the visible narrative landscape, the explicit christological argument—may well be sufficient to account for those details which have been read as signs of a surreptitious divine identity christology. We may simply find that Jesus comes alongside and identifies himself as the solidly historical Son of God who assures his followers that he will be with them when the going gets rough.