davo: When the ordinary Jewish…
Mark Newton : What I don’t understand is…
Kevin Holtsberry: Very helpful summary. I…
Andrew: Thanks, for this, Richard…
Samuel Conner: Just starting into your new…
END_OF_DOCUMENT_TOKEN_TO_BE_REPLACED

In the form of a God: The Pre-existence of the Exalted Christ in Paul: what the book is about and why (2 comments)
Notes on J. Richard Middleton’s The Liberating Image: The Imago Dei in Genesis 1 (0 comments)
Our eco-theological blindspots and the climate crisis (0 comments)
Biblical hermeneutics and the destabilising of the world (0 comments)
END_OF_DOCUMENT_TOKEN_TO_BE_REPLACED

Dissonance-reducing rationalisations of failed expectations in the early church. Or not 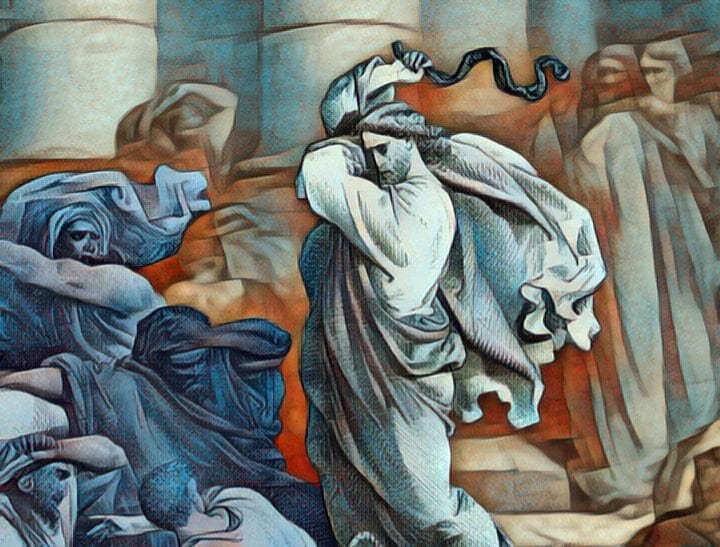 Matthew Hartke describes himself on Twitter as a “Post-Christian Bible nerd endlessly fascinated with the historical Jesus and the origins of Christianity.” I had a bit of a debate with him a few years back in an Unbelievable podcast about whether Jesus was a failed apocalyptic prophet. I have some sympathy for his point of view.

This post follows up on a Twitter thread, in which Hartke argues that the most pertinent question regarding Jewish apocalyptic language is not whether it is literal or metaphorical but what “magnitude” of event was envisaged—I guess basically whether the event was on a historical or a cosmic scale.

He then develops a highly compressed critique of N.T. Wright’s argument in Jesus and the Victory of God, which concludes with a negative assessment both of Wright and of the early church.

The contradiction at the heart of Wright’s project

On the one hand, Wright says that no first-century Jew would have thought that the new exodus, restoration of Jerusalem, and subjugation of the nations promised by the prophets had happened. Yes, there was a splendid temple in Jerusalem, but the political-religious condition of Roman-occupied Israel fell a long way short of the extravagant hopes generated in the Old Testament prophets.

On the other hand, Wright’s “whole project” hangs on the claim that the resurrection of Jesus, the birth of the church, and, somewhat incidentally, the events of the Jewish War constituted, in Hartke’s words, “the fulfillment of the Jewish hope for restoration, the long-awaited new exodus, the end of exile, etc.”

The problem is that the “Christian” fulfilment was no more substantive than Herod’s temple. There is still a yawning chasm between language and reality.

The argument about a dissonance-reducing rationalisation seems misguided. The core of Jesus’ message to Israel would have remained valid even if he had not been raised from the dead.

Wright “scores a rhetorical victory” by insisting that Jesus’ apocalyptic language must be understood metaphorically, but this misses the critical issue, which is that Jesus and his followers were doing exactly what Wright has said no right-minded Jew would do. They were claiming that the scriptures were being fulfilled in thoroughly unsatisfactory and unconvincing circumstances.

Hartke takes it for granted, I think, that the prophets were speaking about an end-of-the-world event centred on the restoration of Israel. First century Jews were honest enough to acknowledge that this hadn’t happened with the return from exile. But according to Wright, Jesus and the early church took the great new exodus hope and applied it—yes, metaphorically—to “relatively insubstantial events in the middle of history.”

There is some point to this, Hartke admits. Matthew and Luke do something along these lines—for example, by inserting “from now on” before Jesus’ affirmation about his ”coming” before the high priest (Matt. 26:64; Lk. 22:69). But, he insists:

to say that resurrection of Jesus and the birth of Christianity actually WAS the fulfillment of the substance of the Jewish hope, rather than simply being the dissonance-reducing rationalizations of some of Jesus’ followers, is to merely carry on the same rationalization.

Here we see the complex mind of a post-Christian Bible nerd at work. The question of whether the resurrection of Jesus and the birth of the church constituted a fulfilment of the substance of Jewish hope is an excellent one. But there is a much better answer to it than the cynical insinuation that the claim was a dissonance-reducing rationalisation on the part of Jesus’ disappointed followers.

The Jesus of the Synoptic Gospels does not have much of a vision for what will happen after the vindication of the Son of Man and his followers.

He proclaims the imminence of the rule of God to Israel, calling his people to repentance, implementing a programme of supernatural anticipation of the coming intervention (healing the sick, casting out demons, etc.), and castigating the corrupt and hypocritical leadership of the nation, from Herod down.

He pulls together a motley crew of disciples who will continue his mission to Israel after his death, but the clear expectation is that the whole business will be wrapped up within a generation.

He is thoroughly preoccupied with events that will happen over the next few decades, leading up to the destruction of Jerusalem and the temple.

The climax of Jesus’ vision is the revelation to Israel, after the tribulation of the war, of the “Son of Man coming in clouds with great power and glory” (Mk. 13:24-26). Jesus later says to the high priest that the Council members will “see the Son of Man seated at the right hand of Power, and coming with the clouds of heaven” (Mk. 14:62).

That happened, in effect, at the ascension, when Jesus was exalted to the right hand of God in “fulfilment” of Psalm 110:1.

A generation later, with Jerusalem in ruins, his vindication would be “seen” by those who had him crucified, and he would come with the authority invested in him to assemble and judge his followers. He would “send out the angels and gather his elect from the four winds, from the ends of the earth to the ends of heaven” (Mk. 13:27). Those who had served him well in his absence, so to speak, would be rewarded. Those who had not would be cast out, or worse.

The nations will be judged but only, it seems, with respect to their treatment of the disciples who proclaimed the coming of the kingdom of God in their midst. There is the prospect of many unlikely people coming to recline at table with Abraham, Isaac and Jacob (e.g., Matt. 8:11), and some sort of resurrection is expected, at least of the righteous (Lk. 14:14; 20:35).

But Jesus does not evoke the lavish descriptions that we find in the prophets of the spectacular rebuilding and endowment of Jerusalem, with overawed nations bringing tribute to the God whose glory at last reaches to the ends of the earth. Nor does he promise anything remotely resembling a new heaven and new earth.

So really all that Jesus predicts is the settling of scores with badly behaved Israel and the vindication of those who continued his prophetic mission.

The argument about a dissonance-reducing rationalisation, therefore, seems misguided. The core of Jesus’ message to Israel would have remained valid even if he had not been raised from the dead. His disciples, inspired by the Spirit poured out at Pentecost, could have continued his prophetic mission to Israel, urging the people to repent and be saved from the coming destruction, and could reasonably have argued that Jesus would be raised from the dead on the coming day of the Lord, along with other righteous sons of God, to “shine like the sun in the kingdom of their Father” (Matt. 13:43 ; cf. Dan. 12:1-3).

That would have been entirely plausible. There was no pressure on them to fabricate a story about the resurrection of their crucified messiah on the third day.

The substance of the kingdom of God

In the years after Jesus’ death it became apparent that Israel was not going to repent and believe in the Son whom God had sent to redeem those under the Law (Gal. 4:4). So Jesus’ pessimism was justified.

But what opened up a genuinely new possibility, which even Jesus himself appears not to have considered, was the growing number of Gentiles who came to believe in Israel’s paradoxical messiah—the one crucified in the likeness of sinful flesh who was raised from the dead and given the name which is above every name.

What happens here, in effect, is that the Jewish eschatological vision of concrete political-religious transformation changes horses. The exhausted horse of a Jerusalem-centred transformation finally collapses in AD 70, ridden to death by a reckless, rebellious people.

But the prophetic communities of believers in Jesus switch to a fresh, lively horse just in time, which will carry them through to the establishment of a whole new yahwistic order for the Greek-Roman world.

This is how we get beyond the contradiction in Wright’s method. This is how the substance of the prophetic hope is fulfilled.

There is no transcendent, end-of-the-world vision in the Old Testament, only the prospect of the enhanced splendour and prosperity of Jerusalem as an enduring focal point for the nations within reach of it.

This prospect is carried over into the New Testament: a Davidic king, an obedient priestly people ministering to the living God in their midst, among nations which abandon their idols and serve instead the living God. But the kingdom or empire of YHWH, stretching from Jerusalem to Spain (cf. Rom. 15:18-19, 24), will be governed from the new Jerusalem which is above, where a righteous King of kings and Lord of lords sits enthroned at the right hand of God.

That is what happened. If we take the whole story and resist the standard evangelical error (and post-Christian error) of reducing everything to the death and resurrection of Jesus, there is no need to accuse the early church of dissonance-reducing rationalisations. However they came to believe that Jesus had been seated at the right hand of God, it was for the sake of a spectacular future transformation of the ancient world which actually happened.

Related content
Tom Wright, the return of Jesus, and the failure of history
When prophecy fails: why do people always assume that Jesus got it wrong?
Unbelievable? Was Jesus a failed apocalyptic prophet? Matthew Hartke & Andrew Perriman
Why the early church failed to fulfil the mission of Jesus