Juanita: Hi there Sam We spoke…
Andrew: David, many thanks for this…
David: And, for further reading, I…
David: There’s a substance to this…
Arthur Davis: That, I think, is the…
END_OF_DOCUMENT_TOKEN_TO_BE_REPLACED

Conversation with Mike Bird about In the Form of a God (0 comments)
Answering Mike Bird about the referent of "all things" in 1 Corinthians 8:6 (0 comments)
Interview: The Preexistence of Christ and Narrative Historical Theology (1 comment)
How we got from kingdom to Trinity: Constantine and pagan monotheism (2 comments)
END_OF_DOCUMENT_TOKEN_TO_BE_REPLACED

Answering Mike Bird about the referent of "all things" in 1 Corinthians 8:6 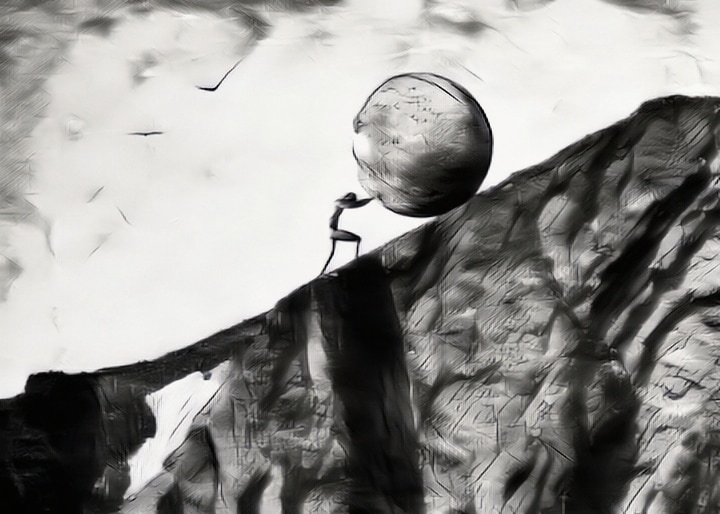 A couple of days after my Transfigured interview, Sam Tideman recorded a conversation with Mike Bird about his book Jesus among the gods: Early Christology in the Greco-Roman World. Mike does a really good job of painting in the neglected pagan religious background to the evolution of christology in the New Testament and the early church. I think Mike and I broadly agree that the richly detailed, restored pagan fresco is much more important for understanding the early response to the testimony to Jesus than has generally been appreciated. He is also not unsympathetic towards my argument about “form of a god.” But we disagree, it appears, about the interpretation of 1 Corinthians 8:6:

When asked what he thinks of my reading of this verse, Mike wheels out a nice Sysyphean metaphor about pushing a big rock up a steep hill. He maintains that ta panta means “all things”—as in “all things”—and refers to the universe. He doesn’t go into detail, to be fair. But I thought the point was worth taking up.

My view, to the contrary, is that if we step aside and let gravity take over, the rock of “all things” will end up somewhere quite different. But playing with metaphors won’t persuade anyone. Here are my reasons for thinking that “through whom all things” is not a reference to the original creation.

1. “Lord” is an eschatological designation

The dissociation of the roles of “Father” and “Lord”—over which Paul takes some trouble, however we read the verse—makes “Lord” an eschatological designation. The Old Testament and otherwise Jewish literary basis for the thematic distinction is set out in the book, but in any case it makes no sense to say that God originally created the universe through a “lord.” Lords are agents not of creation but of judgment and rule. What is brought about uniquely through a lord who is Israel’s messiah (“one Lord Jesus Christ”) is a new political-religious reality for the age to come—beginning with wrath against the Jew, then wrath against the Greek.

In this connection, I need to amend Sam’s summary of my argument in his interview with Mike Bird. He says that I take the “all things” that are “through” Jesus to be a reference, in rather general terms, to the “new creation and spiritual blessings of the new covenant and the things that are coming to us through Jesus.” That is nearer the mark than the popular early high christology reading; nevertheless, it is expressive of a modern perspective that has lost touch with the kingdom of God as the hope of régime change in the ancient world.

I think that we have to keep the political aspect of Paul’s eschatological vision firmly in view—the active divine management of Israel’s corporate presence on the stage of history. As in the Old Testament, “new creation” is still only a metaphor for the renewal of God’s people as God re-establishes their presence in the midst of the nations for the sake of his reputation and influence. The blessing—even the salvation—of the people in the course of that transformation is a by-product; it is not the end itself.

This is all very much to the point when we get to the Christ encomium in Colossians 1:15-20, where the “all things” created in Christ are not the stuff of the natural order—sea, sky, dry land, vegetation, living creatures—but manifestly political entities: “whether thrones or dominions or sovereignties or authorities” (1:16). My argument in the book is that the supreme vision of the Pauline mission was not new creation but the reconciliation of rule in heaven and rule on earth under Christ as king, seated at the right hand of the God of Israel—in the realistic sense that the peoples of the Greek-Roman world, of the Roman Empire, would bow the knee at the name of Jesus and confess him as Lord.

It is not the case that ta panta always and necessarily refers to the whole world as it was originally created, as Mike Bird claims. The focus on political realities in Colossians 1:16 obviously needs explaining, but the only other place in Paul where ta panta is found with a string of prepositional phrase is also better understood, I think, as a reference to a more recent state of affairs:

This doxological statement comes at the end of an argument about the unbelief of the Jews, the inclusion of Gentiles, and the hope that God will have mercy on Israel. This whole story is a demonstration of the unfathomable wisdom and judgment of God. So when Paul says that ta panta are through him, etc., the reference is surely not to the original creation, which is nowhere in view in this passage, but to the recent sequence of events through which God will be glorified in the coming ages.

Similarly, in Ephesians 1:10 Paul speaks of ta panta being brought to a head (anakephalaiōsasthai) in the Christ, “things in the heavens and things on earth in him.” This is a different metaphor; there is no creation language here. But the reference is to a new state of affairs involving ta panta, not to the original creation of the cosmos. It seems to me pretty clear from the passage as a whole, climaxing in Christ’s attainment of authority over “all things” (Eph. 1:20-22), and from the parallel argument in Colossians, that the thrust is solidly eschatological.

3. The frame of reference for “all things” is established elsewhere in the letter

There is both a “from” God part to this narrative and a “through” Christ part.

First, it is “from him” (ex autou)—i.e., from God—that they are in Christ Jesus, who in his suffering “became wisdom for us from God” (1 Cor. 1:30). God the Father, as creator of the world and of Israel, brings new things into existence.

Secondly, the “all things” of the new reality are theirs through Jesus:

for all things (panta) are yours, whether Paul or Apollos or Cephas or the world or life or death or things present or things to come; all things are yours, and you are Christ’s, and Christ is God’s. (1 Cor. 3:21–23)

So my argument is that we have a “wisdom” christology elsewhere in the letter, oriented towards the “creation” of a new world, which adequately accounts for the intersection of cosmological and apocalyptic themes in 1 Corinthians 8:6. A whole new political-religious order is being created, figuratively speaking, through the one Lord Jesus Christ.

Conversation with Mike Bird about In the Form of a God
Interview: The Preexistence of Christ and Narrative Historical Theology
How we got from kingdom to Trinity: Constantine and pagan monotheism
Jesus and Paul, works and faith
Some hazardous thoughts on the Trinity for a new year and a new era
Was it Roman custom for people to return to their home town for a census?
A Hindu asks a very good question about the death of Jesus and the salvation of Gentiles
What do the Christmas stories tell us about the pre-existence of Jesus?
END_OF_DOCUMENT_TOKEN_TO_BE_REPLACED