james: i was trying to explain this…
Marc Taylor:  The fact that “Christ was…
Judo: I agree that the Pharisee’s…
Samuel Conner: Thank you, Andrew; this is…
Andrew: I’m always reluctant to try…
END_OF_DOCUMENT_TOKEN_TO_BE_REPLACED

What was Paul thinking when he wrote “Christ… the one being over all, God, blessed for the ages” (Rom. 9:5)? (1 comment)
The shortfall in Christ’s sufferings: mystical union, messianic woes, the hardships of evangelism, or none of the above? (1 comment)
What happened to the promised land? It became the promised empire (0 comments)
Woke Church, heaven, and a slight problem with the great multi-ethnic multitude (5 comments)
END_OF_DOCUMENT_TOKEN_TO_BE_REPLACED

I’ve been reading David Neville’s book A Peaceable Hope: Contesting Violent Eschatology in New Testament Narratives in order to review it for the Evangelical Quarterly. Neville sets out the problem he means to address in the opening paragraph:

There is a discrepancy at the heart of the New Testament. Briefly stated, the discrepancy is this: although the canonical Gospels present a fairly uniform picture of Jesus as an advocate of peace and practitioner of nonretaliation, certain texts within these same Gospels and in other parts of the New Testament apparently anticipate a future arrival, or parousia, of Jesus in the guise of a violent avenger. The same Jesus who blesses peacemakers, teaches non retaliation, and responds nonviolently to violence directed against himself is nevertheless associated with end-time violence. (1)

The book describes how this tension manifests itself in the Gospels and Acts and in Revelation. I don’t recall a reason being given why the epistles are excluded, though Neville notes that in Paul’s view “rectification by grace does not preclude judgment of human works”—in this respect, he says, “Paul and Matthew were of the same mind” (21). 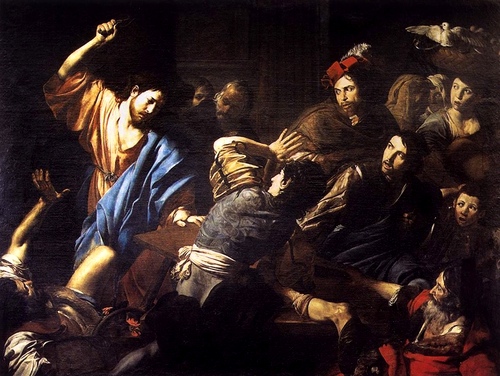 The basic strategy for resolving—or escaping—the tension is to prioritise the morally acceptable non-violent Jesus and relativise or marginalise those texts which speak of a coming retributive judgment. In the case of Matthew’s Gospel, which he brackets with Revelation as the most problematic texts in the New Testament in this regard, Neville suggests two ways in which Jesus’ peaceful moral vision may be given precedence over the prophecies of eschatological violence. My view is that this approach, though on the face of it morally attractive, is arbitrary, and that the texts themselves in fact give interpretive priority to eschatology. Neville holds that as ethical readers of the New Testament we should safeguard the peaceable Jesus by quarantining the judgment texts. To the contrary, I think that we will miss the point of the peaceable Jesus if we do not seek to make sense of him within the eschatological narrative.

Blessed are the cheese-makers…

I say that because I have just signed up for the Jesus & Brian - Or: What Have the Pythons Done for Us conference in London next summer. No, it’s not a joke. At least, I hope it’s not because I’ve just paid £180 for it.

But seriously… the first broad argument that Neville pursues is that while a number of the parables in Matthew’s Gospel have violent endings, we are morally bound to prefer those aspects of his teaching that reflect his commitment to non-violence—such as the blessing of the peacemakers. Barbara Reid’s CBQ article “Violent Endings in Matthew’s Parables and Christian Non-violence” is quoted to good effect here:

Throwing evildoers into a fiery furnace, binding them hand and foot, casting them into outer darkness where there is weeping and gnashing of teeth, putting them to a miserable death, cutting and breaking them into pieces and crushing them, destroying murderers and burning their city, depriving them of the presence of God, putting them with hypocrites or with the devil and his angels for all eternity standing clear contrast to the boundless, gratuitous divine love described in the Sermon on the Mount…. (29)

In Neville’s view, once we start paying attention to “Jesus’s moral vision”, the eight parables with violent endings begin to look a little isolated:

…not only is Matthew’s violent eschatology out of kilter with the much less retributive eschatological outlooks of his canonical counterparts but also the vindictive tone of his parabolic warnings of end-time judgment is matched neither by Jesus’ moral teaching nor by his nonparabolic eschatological instruction. (248)

But setting aside the very modern reflex assumption that the parables of judgment against covenant-breaking Israel have no place in Jesus’ moral vision, the point also has to be made that the sermon on the mount is not a non-eschatological text. The ethical content—non-resistance to evil, love for enemies—is framed eschatologically. The Beatitudes (5:2-12) are less congenial than they appear, consistently invoking texts of crisis and judgment. Jews whose righteousness does not exceed that of the scribes and Pharisees will not enter the kingdom of heaven when it comes (5:20). If they sin, they risk being thrown bodily into Gehenna (5:30). Many are on a broad road leading to destruction (7:13). The house of those who do not obey Jesus’ words will be swept away in the coming storm and flood of divine judgment (7:26-27).

To be fair, Neville acknowledges the “mixed messages” (22). But the impression is given, nevertheless, that the chaff of eschatological violence may simply be sifted out without any loss to the meaning and purpose of the text, or reduced to a note of ethical seriousness: “As envisaged by Matthew, discipleship is not for the weak-willed or fainthearted” (22).

The second argument is theological. It is that, for simple reasons of chronology, incarnation in Matthew takes natural theological precedence over eschatology:

Whatever “divinity” we attribute to the “God with us” displayed in Jesus’s mission and message should surely take priority over whatever residual knowledge of God remains to be disclosed eschatologically. (41)

Two problems here. First, why do we assume that “God with us” is a thoroughly sympathetic, season-of-good-will notion that carries no thought of judgment? In Isaiah 7 the birth of the child Immanuel is a sign that God is present both to judge and to restore his people. On the next page John the Baptist warns that every tree that does not bear good fruits will be cut down and thrown on the fire, and then says of the one who is coming after him:

His winnowing fork is in his hand, and he will clear his threshing floor and gather his wheat into the barn, but the chaff he will burn with unquenchable fire. (Matt. 3:12)

Secondly, why should we assume—as Neville does throughout the book—that a supposedly peaceable, God-with-us, love-your-enemies Jesus “takes precedence over the eschaton epistemologically and ethically” (41)? Perhaps, if we have to take our “moral bearings” from Jesus, that is understandable, but narratively and historically speaking it makes no sense at all—and I don’t think we should be constructing our morality on a malformed narrative. Jesus is not God with us. He was God with Israel. I think we are on much firmer ground if interpret “incarnation” in the light of impending judgment. It was because Israel had sinned and become liable to catastrophic judgment that Jesus pursued a way of non-violence that would lead to suffering and death.

So the basic problem with the book is…

So the basic problem with the book is that David Neville sets out with a modern ethical hermeneutic to read apocalyptic texts. It’s the wrong tool for the job. Since the ethical hermeneutic provides no way to accommodate eschatological vengeance, the only option is to deplore the offending texts and kettle them as best we can. As a result, the New Testament is left profoundly incoherent.

A narrative-historical hermeneutic will take a different approach. It will ask why apocalyptic outcomes—fundamentally biblical outcomes—are pursued by a way of non-violence. That leaves us still with something of an ethical deficit as modern readers, but I think that the narrative itself will solve that problem for us.

That conference on the Life of Brian looks so interesting! Big fan of the movie and it would be so fascinating to listen to scholars use it as a lens to approach scripture.

More to this post, I am finding this unwillingness to approach scripture through history and eschatology so deeply engrained.  So many seem to believe that if you don’t approach scripture theologically or ethically first then we lose any application to our lives or guidance from God.

History is seen as the dry dust of the past and narrative is always seen as an attempt to undermine truth claims and remove the supernatural aspects of “God’s Word.”

Even Annabaptists, who love the anti-empire aspects, seem unwilling to discuss the eschatological aspects you raise for fear it might undermine non-violence.

The reason Paul tells Christians in Rome to submit to the authorities and to allow their enemies to abuse them is because Rome was to be an instrument of wrath against their enemies, primarily the Jews, just as played out in history.  One of the primary motives for passivity in the New Testament is to grope for a way to save people who will be judged harshly for their abuse of Christians.  Without this promised judgment on the horizon, the rationale breaks down.  Part of Neville’s problem would seem to be to generalize passivity for its own sake for all time instead of placing it into the context of that generation.

Did Jesus avoid proclaiming a “day of vengeance” against Israel in the synagogue in Nazareth?
The “historical” Jesus is anything but gentle, meek and mild
How Paul can proclaim one Lord Jesus Christ and not compromise Jewish monotheism
Jesus and the empire to come

What was Paul thinking when he wrote “Christ… the one being over all, God, blessed for the ages” (Rom. 9:5)?
The shortfall in Christ’s sufferings: mystical union, messianic woes, the hardships of evangelism, or none of the above?
What happened to the promised land? It became the promised empire
Woke Church, heaven, and a slight problem with the great multi-ethnic multitude
Which Lord shall we provoke to jealousy?
How Paul can proclaim one Lord Jesus Christ and not compromise Jewish monotheism
Dissonance-reducing rationalisations of failed expectations in the early church. Or not
Getting the mission of the church “right”: the whole point of justification
END_OF_DOCUMENT_TOKEN_TO_BE_REPLACED

What was Paul thinking when he wrote “Christ… the one being over all, God, blessed for the ages” (Rom. 9:5)?

Why did the Jews accuse Jesus of making himself equal to God?

Woke Church, heaven, and a slight problem with the great multi-ethnic multitude