Andrew: See above.
Andrew: I always struggle with this…
Arthur Davis: Thanks for this one, Andrew…
Jo: “In a narrative-historical…
Andrew: Hi Rosemerryn, thanks. Just…
END_OF_DOCUMENT_TOKEN_TO_BE_REPLACED

When prophecy mostly didn’t fail (4 comments)
What did it mean to be the “fragrant aroma of Christ”? (0 comments)
Oops, mustn’t forget it’s Pentecost Sunday this weekend (0 comments)
No, not that undomesticated Jesus, the other one (9 comments)
END_OF_DOCUMENT_TOKEN_TO_BE_REPLACED

I started looking at Hebrews 10 in order to reply to a comment from Chris Wooldridge, who cited the chapter as an example of how Jesus’ death is treated not only as a historical event but also as a theological or metaphysical event.

But you quickly discover that Hebrews 10 is part of a long, dense, tightly woven, intertextual (i.e. it draws extensively on the Old Testament) argument about the significance of Jesus’ death and resurrection for the community of Jewish believers (presumably) to whom the letter is written.

You can’t prise a few statements about Jesus’ death as a one-off sacrifice from it and expect them to stand up on their own as general theological propositions. They don’t. They fall over.

So I have spent rather longer than I intended this week trying to construct a coherent summary of the “great high priest” narrative. Interestingly, it connects the pragmatic non-theory of the atonement argument with the other theme that I have been doggedly pursuing recently—the transformation of the suffering apostles or the suffering churches into the image of Christ.

But it’s a complicated argument, and I’m sure many will find it unsatisfactory. Hebrews is an extraordinary text, but it’s not an easy one.

He will bring many sons to glory

A narrative-historical hermeneutic does not have to extract direct application from the text, by coercion, despite history. We learn about ourselves by telling the story of the historical experience of the people of God.

Salvation means getting to the end

The obedient Son who was appointed great high priest 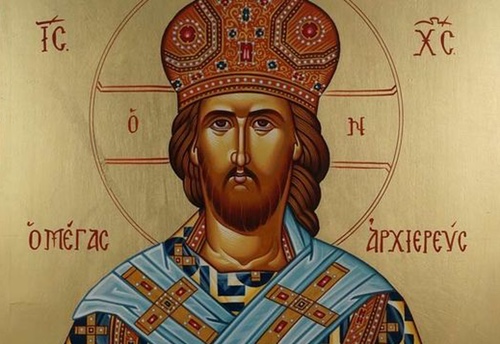 The great high priest presents his own death as an offering

The sacrificial death cannot be separated from the full story of the son who learns obedience, suffers, dies, is raised, is appointed heavenly high priest for the sake of those who draw near to God through him, and rules at the right hand of YHWH. The story is told for the benefit of Jewish believers daunted by the prospect of a long period of uncertainty and persecution before they finally gain the promised vindication and kingdom.

The death of Jesus had redemptive significance in this narrative not because the death worked some sort of deep atonement “magic” but because by the resurrection of Jesus from the dead God brought about something new for his people—a new covenant, on the one hand; Jesus’ supportive role as great high priest, on the other, enabling communities such as this one to emulate their Lord: “let us go to him outside the camp and bear the reproach he endured” (Heb. 13:13).

What’s at stake here is not personal salvation so much as the consistent witness of a vulnerable community through to the day when Jesus is confessed as Lord by the nations, when at last they will enter God’s rest. Job done.

A dead guy came back to life and went to a place called heaven where he gets to be king of the world?

And this somehow is not metaphysical/magical?

Have to admit that I am very confused with all of this.

Fair comment, up to a point. Does this alleviate or aggravate your confusion?

“The elaborate and somewhat contrived high priest analogy is designed to serve this practical purpose.”

I think this gets at the heart of the issue for me, which is Torah and its purpose. What was a high priest for in the divine economy? What were the sacrifices for? Why did the priests wear this kind of clothing and not that etc? How we understand the significance of Torah impacts almost everything else.

If one believes that Torah was originally intended to foreshadow Christ (as several new testament passages seem to suggest), then it will not do to say that the high priest parallel is a mere analogy. It’s an office specifically intended to teach people about the coming messiah. And that changes everything.

“A narrative-historical hermeneutic does not have to extract direct application from the text, by coercion, despite history.”

If one believes that Torah was originally intended to foreshadow Christ…

That could mean different things:

Historically, it makes good sense to say think, on the one hand, that the authors of Torah had no notion of “Christ” to shadow, but on the other, that New Testament authors found in the Jewish scriptures statements/ideas/images/narratives that could be understood from their perspective to foreshadow Christ. So the analogy or typology or even “allegory” is perceived and determined by the interpreter, not by the original author.

On your last point, my gripe is against theology that does not take history into account. It is always necessary to speak about God.

When prophecy mostly didn’t fail
What did it mean to be the “fragrant aroma of Christ”?
Oops, mustn’t forget it’s Pentecost Sunday this weekend
No, not that undomesticated Jesus, the other one
What does Luke’s account of Paul’s visit to Athens tell us about how to do “missional church”?
Not sure about the charts: please explain…
Kingdom of God and missional church: not as difficult to define as you might think
Defying history: the future of the church in a Third World Culture
END_OF_DOCUMENT_TOKEN_TO_BE_REPLACED