Samuel Conner: I see radical contrasts. For…
Katapetasma: Jesus entered Jerusalem as…
Jon Hallewell: I’m not sure why but I…
Paul McGuire: Andrew, I’m sure you have…
Andrew: Well, a couple of points in…
END_OF_DOCUMENT_TOKEN_TO_BE_REPLACED

More on the difference between “kingdom of God” and “shalom” 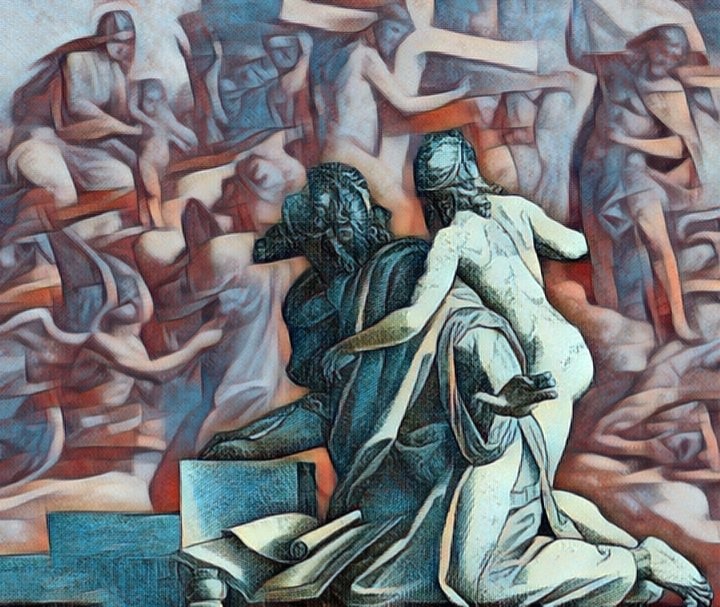 I’ve been greatly enjoying an intermittent conversation with Tim Peebles of the Anvil Trust about the relation between kingdom and new creation or shalom themes in scripture. We both have trouble getting our point across succinctly, so my response to his comments on the post about kingdom and shalom has become a follow-up post on the matter. You should read Tim’s quite detailed remarks. I’ve quoted the main point of the three contentions that he puts forward, but we should never take statements out of context.

TP: I see significant overlap in the OT language used for creation and kingdom/covenant.

Yes, the “kingdom/covenant community is often described in creational (or new creational) language.” This is because the community was from the beginning conceived as a new creation in microcosm that would experience the original blessing of the world and prosper in the land that God would give them. The problem was that the microcosm had all the failings and frailties of the macrocosm and therefore needed strict and effective governance—internal judgment to maintain justice and righteousness and external protection against enemies.

There is some reference to God acting outside of Israel to safeguard and bless. Isaiah speaks, for example, quite remarkably, of the eschatological blessing of Egypt and Assyria: ‘In that day Israel will be the third with Egypt and Assyria, a blessing in the midst of the earth, whom the LORD of hosts has blessed, saying, “Blessed be Egypt my people, and Assyria the work of my hands, and Israel my inheritance”’ (Is. 19:24–25).

So here, indeed, we have the idea that what God does in and through the microcosm of his new creation people becomes a means of mediating the original blessing of creation to peoples and cultures and civilisations which do not know him. But the particularism remains at the heart of the “more panoramic biblical theology.”

TP: With regard to the covenant/Kingdom people of Israel, I see biblical warrant for caution about the centrality of the kingdom model. It is significantly critiqued at its source…

The kingdom model is ambiguous, agreed, but it is never abandoned. The prophetic ideal is not a return to a tribal confederacy led by part-time judges and prophets. It is always (nearly always?) framed as the restoration of the central Jerusalem institutions of monarchy and temple as the basis for maintaining Torah and governing the land.

The New Testament expectation is that YHWH will raise up a “horn of salvation for us in the house of his servant David” (Luke 1:69).

I’m not sure what Tim means by “non-monarchic ways of God’s involvement with the covenantal people.” But if the king does his job, judges righteously, goes out and defeats Israel’s enemies, then he creates space within the land for people to live well and walk with God. It is significant, I think, that it is an idealised king (Solomon) who is the mouthpiece for Israel’s Wisdom tradition. Wisdom is required, in the first place, for good governance.

TP: I think there is biblical (OT) warrant for thinking of God’s kingly rule beyond the covenant with Israel.

Again, I’m not sure we’re so far apart here. The point I would underline, however, is that we always see God dealing with the nations through Israel’s eyes and mostly with Israel’s interests in view. This is consistently reflected in the texts cited.

For example, in Psalm 9 YHWH “sits enthroned in Zion,” and his judgment of the nations is bound up with his defence of oppressed Israel. David’s enemies turn back and perish because “you have maintained my just cause; you have sat on the throne, giving righteous judgment” (Ps. 9:4). The final hope is that the nations will fear the God of Israel (Ps. 9:19-20). It’s easy to overstate or misread the apparent universalism of these texts.

Psalm 45 celebrates Israel’s king, who will “ride out victoriously for the cause of truth and meekness and righteousness.” God is “a great king over all the earth” because he subdued the Canaanite peoples under Israel (Ps. 47:2-3). The idea in Psalms 94-99, I think, is firmly Israel-centric and probably eschatological: God will judge his own people and establish righteousness, and on that basis will judge the idol-worshipping nations. Psalm 103 tells Israel’s story, so when the author says that the “LORD has established his throne in the heavens, and his kingdom rules over all” (Ps. 103:19), the point may only be that the God of heaven rules over all who are subject to his covenant (Ps. 103:18). Psalm 145 celebrates the enduring rule of YHWH over his people and urges that the glory of this kingdom be made known to the “children of man” (Ps. 145:11-13).

This seems to me to be the consistent “evangelistic” paradigm both in the Old Testament and the New Testament: God acts to judge and save his people; that extraordinary action is proclaimed to the nations as evidence of the might and faithfulness of Israel’s God; therefore, the nations will submit to, or be subjected to, YHWH’s rule (cf. Rom. 15:8-12).

YHWH, “the God of Israel,” is extolled as ruler over all because he has made available the materials necessary for the construction of the temple (1 Chron. 29:1-13). Hezekiah declares that YHWH is God “of all the kingdoms of the earth” because he wants to be saved from the king of Assyria, with the result that “all the kingdoms of the earth may know that you alone are the LORD” (Is. 37:14-20).

Again the paradigm: God acts as king to defend his people from military attack and that act of salvation is proclaimed to polytheistic nations in the hope that they will come to the realisation that there is only one God.

Even the account of Nebuchadnezzar’s descent into madness in Daniel 4 cannot be separated from the story of Israel’s struggle to maintain identity in exile, subject to often antipathetic pagan power. Nebuchadnezzar must learn that the “Most High rules the kingdom of men and gives it to whom he will” (Dan. 4:32); the kingdom is later taken from Belshazzar and given to Darius the Mede (Dan. 5:30); and then Daniel has a vision in which kingdom, etc., are taken from the great pagan powers, supreme among the Greeks, and given to the “people of the saints of the Most High.” YHWH rules over the nations with the ultimate end in view, arguably, that his own people should exercise a righteous dominion over them (Dan. 7:14, 27).

The systematic conversion of the imperial power eventually happens under Constantine because Jesus chose the way of suffering servanthood and was, as a result, given the name which is above every name, etc., to the glory of the one God whom Israel had served since Abraham (cf. Phil. 2:6-11).

So, as I see it, Israel’s witness to the sovereignty of God over the nations is ultimately self-serving: it is the belief that YHWH is more powerful than the gods of the nations, therefore he will deliver his people from the nations, and just this faithful and dynamic commitment to his people (even at the cost of his own Son) will eventually win over the nations to serve the one true living creator God (cf. 1 Thess. 1:9-10).

This is all a kingdom narrative, having to do with the “political” management of Israel’s existence in the midst of the nations over time, culminating in the rule of Israel’s Messiah over the nations. But it is a “new creation” people that is being managed, and one of the consequences of YHWH’s kingly action is the renewal of Israel’s new creation existence, whether through the restoration of ruined Jerusalem (cf. Is. 51:1-3), or through the indwelling of God’s Spirit.

So I remain somewhat sceptical about the ideological foregrounding of shalom—certainly on biblical grounds, but I’m also not sure it helps us to deal with our own “eschatological” crisis. Obviously, shalom can be made to stand for the best of created life in the presence of God and must be embraced. But it seems to me that both the biblical narrative and experience keep the failure of creational goodness and blessing at the centre of theological concern. Shalom is experienced only fleetingly and proleptically. The kingdom themes of government, judgment, punishment, repentance, forgiveness, redemption, and salvation dominate.

Related content
The difference between “kingdom of God” and “shalom”
If you enjoyed reading this post, why not share it with associates, friends, and loved ones?

The difference between “kingdom of God” and “shalom”
What happened to the promised land? It became the promised empire
The ends of the ages: church in the Anthropocene
Was Jesus among the oppressed?

Jesus and the Capitol Hill mob
Now available! Hell and Heaven in Narrative Perspective (second edition)
Progressive Christianity and the narrative-historical method
A happy disappointing Christmas to everyone!
Podcast: Talking with Lynsey and Stuart Gilmour about an “alternative” approach to mission in Scotland
Podcast: The ends of the ages: church in the Anthropocene
What did Paul mean by the groaning of creation? Does the argument work today?
New Testament eschatological texts categorised by horizon
END_OF_DOCUMENT_TOKEN_TO_BE_REPLACED