davo: When the ordinary Jewish…
Mark Newton : What I don’t understand is…
Kevin Holtsberry: Very helpful summary. I…
Andrew: Thanks, for this, Richard…
Samuel Conner: Just starting into your new…
END_OF_DOCUMENT_TOKEN_TO_BE_REPLACED

In the form of a God: The Pre-existence of the Exalted Christ in Paul: what the book is about and why (2 comments)
Notes on J. Richard Middleton’s The Liberating Image: The Imago Dei in Genesis 1 (0 comments)
Our eco-theological blindspots and the climate crisis (0 comments)
Biblical hermeneutics and the destabilising of the world (0 comments)
END_OF_DOCUMENT_TOKEN_TO_BE_REPLACED

The way of Jesus in the wilderness 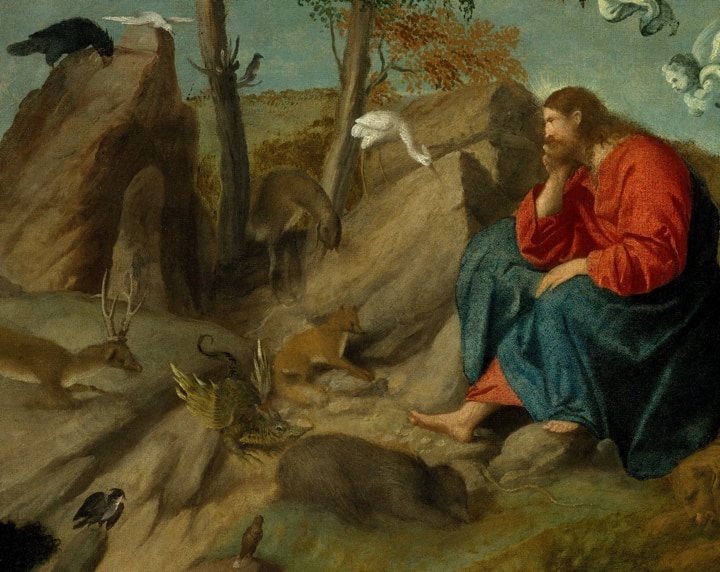 This may not add up to very much, but I’ll give it a go….

The “gospel of Jesus Christ” begins, according to Mark, with the appearance of John baptising people from Jerusalem and Judea in the river Jordan. Mark sees this as some sort of fulfilment of what was “written in Isaiah the prophet”:

Behold, I send my messenger before your face, who will prepare your way, a voice crying in the wilderness prepare the way of the Lord, make straight his paths. (Mk. 1:2-3)

Behold, I am sending my messenger, and he will oversee the way before me, and the Lord whom you seek will suddenly come to the shrine. And the messenger of the covenant whom you want—behold, he is coming, says the Lord Almighty. And who will endure the day of his arrival, or who will withstand in his appearance? (Mal. 3:1–2 LXX)

A voice of one crying out in the wilderness: “Prepare the way of the Lord; make straight the paths of our God. Every ravine shall be filled up, and every mountain and hill be made low, and all the crooked ways shall become straight, and the rough place shall become plains. Then the glory of the Lord shall appear, and all flesh shall see the salvation of God, because the Lord has spoken.” (Is. 40:3–5 LXX)

Quite how and why Mark merges these two texts is a complex matter, and I don’t propose to enter into it here. There is also, of course, the contentious issue of the relation between the “Lord” who is YHWH and the “Lord” who is Jesus. I think we can keep the lid on that can of worms for now.

What I want to highlight here is the recurrence of the phrase “in the wilderness” (en tēi erēmōi) in this opening section and ask whether perhaps it holds the story together in a rather interesting way.

Mark emphasises the fact that John appeared “baptising in the wilderness and proclaiming a baptism of repentance for forgiveness of sins” (Mk. 1:4). So the proclamation is made “in the wilderness,” but what is prepared in this manner is not located in the wilderness, either literally or metaphorically. The outcome is that numbers of people from Jerusalem and from the towns and villages of Judea repent, are baptised, and change their ways.

John, however, distinguishes between his own baptism in water and the baptism in the Holy Spirit that a stronger one to come will perform (Mk. 1:7-8), and so it is that “in those days Jesus came from Galilee and was baptised in the Jordan by John, and immediately ascending from the water he saw the heavens split open and the Spirit as a dove descending to him” (Mk. 1:9-11).

It is not said that Jesus’ baptism took place “in the wilderness”—we are told only that Jesus came from Galilee to the Jordan. But “immediately” after the baptism “the Spirit drove him out into the wilderness; and he was in the wilderness forty days being tested by the satan, and he was with the wild animals (thēriōn), and the angels were ministering to him” (Mk. 1:12-13).

Mark uses “immediately” (euthus) a lot, but it is striking here, contrasting with the less urgent temporal expressions “in those days” (Mk. 1:9) and “after John was arrested” (Mk. 1:14) either side. The wilderness is mentioned twice within the space of eight words in Greek (eis tēn erēmon; kai ēn en tēi erēmōi). The action of the Spirit in casting Jesus out (ekballei) is forcefully expressed: demons are frequently “cast out” in Mark; if your eye causes you to sin, you should “throw it out” (Mk. 9:47); Jesus “drove out” the traders from the temple (Mk. 11:15); and the body of the murdered son is “thrown out” of the vineyard (Mk. 12:8).

Then, following the arrest of John, who has served his purpose, Jesus goes to Galilee and begins to proclaim the “gospel of God”: “the time is fulfilled and the kingdom of God has drawn near; repent and believe in the gospel” (Mk. 1:14-15). The whole sequence is tightly bound together.

So here’s what I’m wondering. Given the literary cohesion of Mark 1:1-15, has Mark understood John’s role to be specifically the preparation of Jesus for his experience in the wilderness following his baptism?

Mark gives no indication as to the content of the “testing” by the satan, but in Matthew and Luke it is presented as a testing of his sense of vocation as “Son of God” (Matt. 4:1-11; Lk. 4:1-13). The exodus journey is clearly evoked. Jesus is like Moses, who spent spent forty days and nights on the mountain, neither eating bread nor drinking water, while Israel provoked the Lord to such wrath that he threatened to destroy them (Deut. 9:8-9). The scriptural answers that he gives are all likewise drawn from the statutes and rules which the Lord commanded Moses to teach the people, “that you may do them in the land to which you are going over, to possess it” (Deut. 6:1): a person does not live by bread alone; do not put the Lord your God to the test; you shall worship the Lord your God and him only shall you serve (Deut. 6:13, 16; 8:3). Jesus is not YHWH in this wilderness (ah, that can of worms!) but a second Moses who will lead a reformed and obedient people on a journey through the wilderness towards a new future for Israel.

Guelich argues that Jesus’ peaceful co-existence with the wild animals “boldly declares the presence of the age of salvation when God’s deliverance would come in the wilderness and harmony would be established within creation according to the promise, especially of Isaiah.”1 But I think that a less benign image may be intended. In the same section in Deuteronomy we read regarding the conquest of the land:

And the Lord your God will consume these nations before you little by little; you will not be able to consume them quickly, lest the land become a wilderness (erēmos) and the wild animals (thēria) be multiplied against you. (Deut. 7:22 LXX; cf. Exod. 23:29)

The particular narrative is not relevant, but it highlights the fact that wilderness and wild animals often symbolise the failure of Jewish political-religious life.2 In an earlier oracle of return Isaiah says that those who have been scattered will travel a pure and holy way, but “no lion shall be there, nor shall any of the evil beasts come up on it or be found there, but the redeemed shall walk on it” (Is. 35:8-9 LXX).

Then again, Mark may only mean that Jesus survived in the wilderness in the same way that wild animals do. We are told that Judas Maccabeus fled to the wilderness (erēmon) with nine others and “kept himself and his companions alive in the mountains as wild animals (thēriōn) do; they continued to live on what grew wild so that they might not share in the defilement” (2 Macc. 5:27; cf. 10:6). Perhaps Jesus was a second Judas Maccabeus, leading a one man revolt against the corrupt Jerusalem régime. Probably not.

In any case, the intensely challenging time that Jesus spent in the wilderness is presented as the climax to a story determined by the period of John’s ministry. John is the “messenger” in the wilderness, dressed and fed by the wilderness, administering a baptism of repentance for the forgiveness of sins. He prepares Jerusalem and Judea for a future action of God, but he also provides the occasion for Jesus to take over leadership of this movement as the beloved Son who will play the part of YHWH’s servant in the power of the Spirit (cf. Is. 42:1).

This same Spirit immediately impels Jesus into the wilderness, where he becomes, for Matthew and Luke, a prophet like Moses or the embodiment of obedient Israel making an arduous journey towards a land that might otherwise be a wilderness filled with wild beasts. So the prophetic ministry of John has laid out a path in the wilderness, so to speak, which Jesus must walk before he proclaims the “gospel of God” to Israel.

It does seem “wilderness” was understood and used metaphorically and literally. On one hand, it seems to represent a loss of focus and confusion. In this sense, the prophet will bring truth and clarity, making straight the path.

On one other hand, it points to the fall in Genesis, the loss of Eden—a wild, desolate, uninhabitable place. A place where survival requires God’s favor demonstrated through miraculous interventions (e.g. Moses, Elijah, Jesus).

Perhaps Mark was simply saying those who heed the words of the new Elijah, repent, and walk the straight path will see the wilderness conquered as the deserts sprout forth vegetation when God transforms the world through his chosen one, the Messiah.