A new Dead Sea Scrolls Cave and the narrative-historical method

It appears that a new Scrolls Cave has been discovered at Qumran—the first new cave in sixty years. All that was found in the cave, sadly, were the remains of six broken jars, some fragments of parchment and papyrus, and a piece of linen. Any scrolls that might have been preserved in the jars were looted in the mid-20th century. 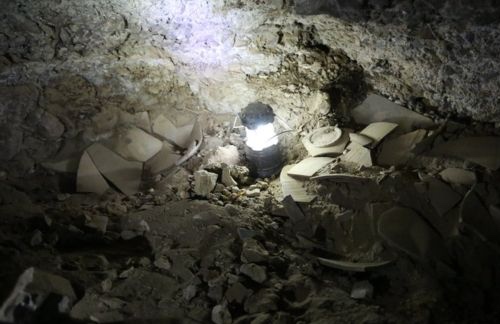 Craig Evans is clearly excited about the find all the same and provides details of the excavation on the Logos Academic Blog.

What impressed me, though, were these two paragraphs, which capture to my mind the importance of the historical part of a narrative-historical hermeneutic:

The caves, the ruins, and the scrolls of Qumran are important because they link the Old Testament and Jewish world to the world of Jesus, the Christian Church, and the writings of the New Testament. These discoveries near the Dead Sea also link sacred texts with hard evidence. The texts clarify the hard evidence, and the hard evidence clarifies the texts.

What archaeological evidence shows is that the ancient narratives of our old scriptures reflect an ancient world that actually existed, not a fairytale world of imagination and fiction. Thanks to archaeology, which in the last century or so has uncovered a great quantity of manuscripts, we now know that the ancient texts do indeed speak of real people, real places, and real events.

What we are looking for is a story of Christian origins that precedes enshrinement in the sacred book of the church, that antedates theological rationalisation, that comes to life in the real, dirty, bloody world of first-century Judaism, that shares the historical horizons and concerns of such embattled communities as the sectarians at Qumran.

Yeah, but the only problem is I wonder how many of these “scholars” such as Evan’s have actaully read the DSS? I’ve been studying them for a little over a year now, along with various ANE texts and the pseudepigrapha texts, and I’m pretty sure evangelicalism wouldn’t accept what they have to say about things.

Nevertheless, sure would have been great if more documents would have been discovered in that cave. I’m still hoping someday we find some additional texts written by Paul and they contain some thoughts that either straightens things out and/or shakes things up. :)

I think we can safely assume that Craig Evans has read the Dead Sea Scrolls:

He’s the editor of two of them with their content written by others, not quite the same. I did buy the first one on your list since he did write it (and does have a chapter on the DSS) and proceeded to read chapter 12 sub-section “I said, ‘You are God’s’ ” from Ps. 82. How he dealt with that passage would be a very good indicator on how much he understands. Very disappointed! I’ll read the rest of the book, but I already know what’s coming and I’m sure I’ll learn something of value. Of course the fact that he’s a professor of Christian Origins at a Baptist University speaks volumes. Can’t imagine a Baptist University employing anyone who deviates from the standard evangelical mindset and understanding. Don’t imagine your NT perspective would have a chance of being heard there. :)