Andrew: Hi there Sam We spoke…
Andrew: David, many thanks for this…
David: And, for further reading, I…
David: There’s a substance to this…
Arthur Davis: That, I think, is the…
END_OF_DOCUMENT_TOKEN_TO_BE_REPLACED

Answering Mike Bird about the referent of "all things" in 1 Corinthians 8:6 (0 comments)
Interview: The Preexistence of Christ and Narrative Historical Theology (1 comment)
How we got from kingdom to Trinity: Constantine and pagan monotheism (2 comments)
Jesus and Paul, works and faith (0 comments)
END_OF_DOCUMENT_TOKEN_TO_BE_REPLACED

The parable of the good Samaritan and the plight of Israel

Alex notes that a corollary of the narrative-historical approach is that “Jesus’ primary ethical concern centered around the survival of the covenantal communities he was forming—communities that he believed would face violent opposition”. That is well stated. Jesus taught his disciples how to behave—towards those inside the community and those outside it—in the tumultuous period leading up to the destruction of Jerusalem and the temple, the revelation of the glory of the Son of Man, and their public vindication. What the Gospels give us is not a general purpose Christian ethic but an eschatological ethic for groups of believers who had taken the risky step of following Jesus down the narrow road that would lead to the life of the age to come.

Nevertheless, Alex wonders whether texts such as the parable of the good Samaritan (Lk. 10:25-37) and the sheep and goats judgment scene (Matt. 25:31-46) “push against this predominant ethical agenda”. These have often been used to “demonstrate that Christianity is a religion whose ethical core is social transformation through acts of service”—and in the case of the parable of the good Samaritan, through the refusal to give priority to the insider.

I have discussed the sheep and goats passage a number of times. It has a very specific eschatological frame of reference: it is a judgment of the nations according to how they reacted to the presence of the vulnerable emissaries of Jesus in their midst; it is an aspect of the vindication of the disciples at the parousia. It is not an argument for social action. 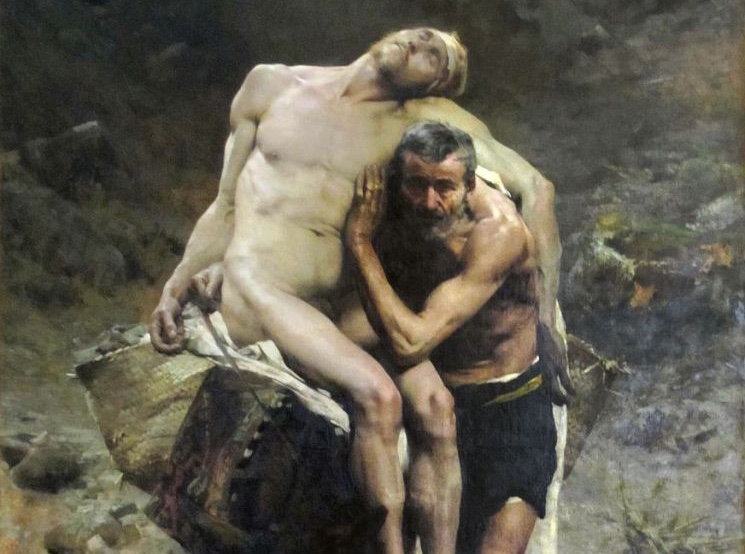 But what about the good Samaritan? The story certainly lends itself to a more general moralising interpretation: we are always having to deal with the tensions between institutional religion and practical compassion, between social cohesion and respect for the Other. But just because we can easily lift the parable out of context and apply it in such a fashion doesn’t mean that’s how Jesus intended it to be understood.

There are a couple of observations that we can make first.

1. The lawyer asks about the life of the age to come. He does not mean “how can I get to heaven?” He is asking about the requirements for a Jew to be part of the coming age of restored Israel. Jesus’ response, in effect, is that if Israel abides not merely by the letter of the Jewish Law but also by its spirit, the nation will escape judgment.

2. The criticism of the priesthood comes to a climax in the protest in the temple, when Jesus accuses them of having turned the place into a “den of robbers” (Lk. 19:45-46). This can only have been heard as a warning that the behaviour of the priesthood will bring destruction on the temple (cf. Jer. 7:8-15). The parable, therefore, highlights an alternative way for Israel.

Just because we can easily lift the parable out of context and apply it in such a fashion doesn’t mean that’s how Jesus intended it to be understood.

But as Kenneth Bailey noted in Through Peasant Eyes, we find an especially illuminating literary background to the story in Hosea 6:1-11. I don’t have Bailey’s book to hand, but it’s easy enough to see the parallels once you start looking.

Hosea 6:6 is also quoted by Jesus in response to the Pharisees who complain about him eating with tax collectors and sinners: “Those who are well have no need of a physician, but those who are sick. Go and learn what this means: ‘I desire mercy, and not sacrifice.’ For I came not to call the righteous, but sinners” (Matt. 9:12–13). Notice the connection with the theme of sickness and healing. Arguably, Jesus’ words here are a precise summary of the parable of the good Samaritan: the tax collectors and sinners are “sick” Israel, but this time it is the Pharisees who pass by on the other side of the road.

Jesus himself doesn’t feature in the story. He is neither the man who fell among thieves nor the Samaritan. He is the prophet. He is Hosea berating the leadership of Israel and the temple hierarchy in particular for their neglect of compassion. On the day of judgment they will be put to shame by the righteousness of the despised Samaritans—just as Paul expected Jews of the diaspora to be shown up on the day of God’s wrath by the innate righteousness of Lawless pagans (cf. Rom. 2:25-29).

So there is no “eschatology” in the parable itself, but it is part of an answer to a question about inheriting the life of the age to come, and it cannot be separated from a wider rebuke of the priesthood. To the extent that it is a midrash of sorts on Hosea 6:1-11, moreover, it is likely to have been heard as a reworking of the prophet’s analysis of the political-religious crisis facing the people of God. Jesus was consistently an apocalyptic prophet, not a moral philosopher.

I’m just shooting from the hip, here, but when we think about how “Scripture applies today,” this seems quite applicable.

If the parable of the Good Samaritan is an indictment against Israel’s religious establishment/power structure, it works because the Samaritan in the story is doing what Israel was supposed to have done. The religious leaders are complicit in the oppression of Israel and are doing nothing to turn this situation around. Certain Gentiles are actually behaving more like Israel is supposed to, and this comes out explicitly in the Gospel narratives, much to Jesus’ frustration.

While it may not be a clarion call to end racism or minister more to outsiders in a direct sense, it’s still an indictment over a concrete social structure where the people of God are supposed to do justice, show compassion, restore those who are disadvantaged, and the people held most accountable for this are the leaders.

It’s fair, I think, in light of things like Hosea’s situation and Jesus’ repurposing of that situation for the people of God to examine themselves to see if they are a community that is just, compassionate, and quick to heal, knowing that if they become complicit in oppression, they have lost their identity and calling and incurred God’s displeasure.

We have to be aware of what we’re doing when we do that, of course. Jesus is not laying out a social justice program for the church to pursue as transhistorical, ethical principles for all time. But I think it’s a decent extrapolation/repurposing of the narrative to describe our own situation.

Excellent! I think this is exactly the right approach. The challenge is to devise our own narratives, whether repurposed tradition or completely new, to articulate this sort of vision. But, yes, prophetic stories are mostly told to the church and make uncomfortable listening.

Whew! I’m glad to hear you agree with the prior comments. At first I was concerned that the position was that the narrative historical approach is the end of the story. But I know you’ve also stated that we need to develop a new narrative (and ethic) for the church in our time. It seems to me that repurposing texts like these are precisely what the church should be engaged in, particularly in engagement with those we now consider distasteful and social outcasts (e.g., religious “others” such as Muslims). Isn’t the challenge then to identify particular texts, why they have priority, and how this fits into the most appropriate post-Christendom narrative for our age?

What about connections with the story of Oded?

Well, that’s interesting. Thanks. A great picture, isn’t it?

The description of the provisions made for the captives is especially impressive: “They clothed them, gave them sandals, provided them with food and drink, and anointed them, and carrying all the feeble among them on donkeys, they brought them to their kinsfolk at Jericho, the city of palm trees. Then they returned to Samaria.” (2 Chr. 28:15).

These are my immediate reasons for not agreeing with you, but they may not be insuperable objections, and it may be that the Oded story has given a more coherent narrative form to the oracular material from Hosea 6.

Thank you Andrew. This was helpful. I had never come across the Hosea 6 connection. It seems to be a promising point of contact although I’d also like to know your thoughts on 2 Chronicles 25.

Do you think Luke’s post-gentile-mission knowledge affects his telling of the parable? I’m thinking specifically of the influx of Samaritans into the community in Acts 8. Luke knows that believing Samaritans are putting Israel to shame and so he picks specifically a Samaritan for his parable. But then he also notes in Acts 6:7 that “many priests became obedient to the faith.” So Luke knows the priests aren’t completely hopeless… The greater context of the parable certainly implies knowledge concerning the failed mission to the wise in Israel (Luke 10:21, Acts 18:6) and hints that the message will be received among the gentiles. (Luke 10:13-16)

I’m also still curious as to whether Jesus could be making a point about the relation of Samaritans to the covenant people — as ‘neighbor’ refers to a covenant member in Jesus’ scriptures. It’s clear from the parable of the Prodigal Son that Jesus’ ministry in some sense brought Israelite sinners back into relationship with Abraham (at least from the point of view of the Pharisees). Does his ministry then also bring Samaritans back into relationship with Abraham? I suppose I’d need to know a lot more about the history of the Samaritans, but Carmichael suggests they traced their lineage back to Joseph and thus to Abraham.

Some hazardous thoughts on the Trinity for a new year and a new era
Interview: The Preexistence of Christ and Narrative Historical Theology
How we got from kingdom to Trinity: Constantine and pagan monotheism
The throne of Jesus and the throne of God
Answering Mike Bird about the referent of "all things" in 1 Corinthians 8:6

Answering Mike Bird about the referent of "all things" in 1 Corinthians 8:6
Interview: The Preexistence of Christ and Narrative Historical Theology
How we got from kingdom to Trinity: Constantine and pagan monotheism
Jesus and Paul, works and faith
Some hazardous thoughts on the Trinity for a new year and a new era
Was it Roman custom for people to return to their home town for a census?
A Hindu asks a very good question about the death of Jesus and the salvation of Gentiles
What do the Christmas stories tell us about the pre-existence of Jesus?
END_OF_DOCUMENT_TOKEN_TO_BE_REPLACED