Juanita: Hi there Sam We spoke…
Andrew: David, many thanks for this…
David: And, for further reading, I…
David: There’s a substance to this…
Arthur Davis: That, I think, is the…
END_OF_DOCUMENT_TOKEN_TO_BE_REPLACED

Answering Mike Bird about the referent of "all things" in 1 Corinthians 8:6 (0 comments)
Interview: The Preexistence of Christ and Narrative Historical Theology (1 comment)
How we got from kingdom to Trinity: Constantine and pagan monotheism (2 comments)
Jesus and Paul, works and faith (0 comments)
END_OF_DOCUMENT_TOKEN_TO_BE_REPLACED

Jesus and Jonah at sea: what the disciples learned 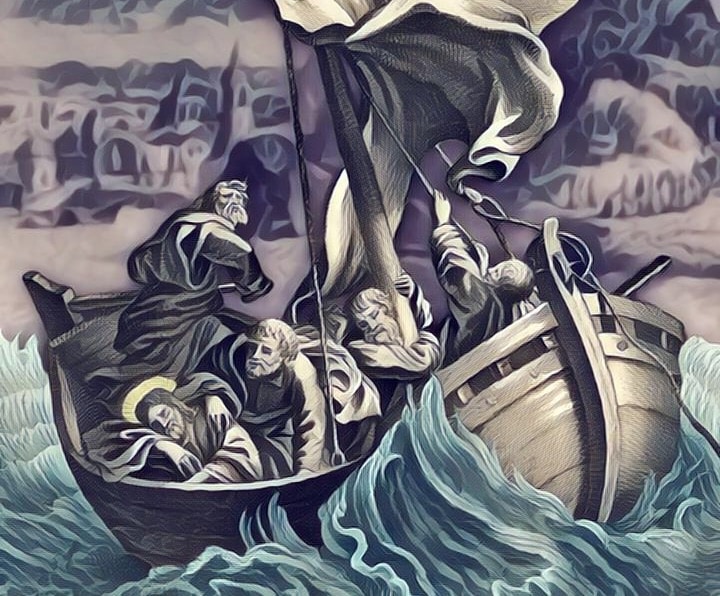 The relevance of Psalm 107:28-29 for understanding Jesus’ imperious rebuke of the wind and waves is often noted: some went down to the sea in ships; the Lord “commanded and raised the stormy wind, which lifted up the waves of the sea”; they were terrified and cried out to the Lord, and he “made the storm be still, and the waves of the sea were hushed” (cf. Ps. 65:7). Simon Gathercole remarks that “Jesus makes the strange transition from a Jonah-like figure who sleeps while the rest of the sailors are in peril… to a divine figure who calms the storm.”1 But for Mark, at least, it appears that the Jonah story is not merely a springboard for christological reflection; it is central to the meaning of the passage.

In the first place, therefore, the carefully constructed parallelism presents Jesus as the obedient prophet who does not refuse to travel to foreign parts to prophesy in the name of the Lord—to declare, in effect, as the anointed Son of the Most High God, that the unclean Roman presence that has corrupted Israel will soon be expelled (Mk. 5:1-13). Indeed, we are told in Matthew and Luke, albeit in a different connection, that “something greater than Jonah is here” (Matt. 12:41; Lk. 11:32); and just as Jonah was a sign to the people of Nineveh, so the Son of Man will be a sign—of impending judgment—to this generation of Jews (Lk. 11:29-30; cf. Matt. 16:4).

Just as important, however, is the parallel between the disciples and the sailors, which is where Psalm 107 becomes relevant.

The captain roused Jonah from his sleep for good reason: Jonah worshipped “the LORD, the God of heaven, who made the sea and the dry land” (Jon. 1:9). But by the same token, the disciples had no need to wake Jesus: they should have cried out in their trouble to the God who made the sea and dry land, and he would have delivered them from their distress; he would have calmed and the wind and the waves (cf. Ps. 107:28-29).

That is the point of Jesus’ reproach: “Why are you so afraid? Have you still no faith?” (Mk. 4:40). “Have faith in God,” he tells the disciples later. “Truly, I say to you, whoever says to this mountain, ‘Be taken up and thrown into the sea,’ and does not doubt in his heart, but believes that what he says will come to pass, it will be done for him. Therefore I tell you, whatever you ask in prayer, believe that you have received it, and it will be yours” (Mk. 11:23–24).

That Jesus is “something greater than Jonah” is demonstrated by the fact that he directly rebukes the wind and the waves. Mark, however, provides his readers with a clear answer to the disciples’ astonished question, “Who then is this, that even the wind and the sea obey him?”

The consistent claim of the Gospel as a whole is that this figure who appeared to Israel as a miracle-working prophet, who was rejected by the religious and political elites, who would suffer and be killed, would nevertheless be vindicated within the lifetime of his enemies—would be proved right—and would receive from Israel’s God, as the Son of Man, the authority to judge and rule over his people.

The authority demonstrated in the rebuke to the wind and sea, therefore, is best understood as a prophetic anticipation of the authority that Jesus would have in the post-second temple era, rather than as the disclosure of a present divine identity. The lesson for the disciples was that they would need the faith to be obedient messengers to Israel and the nations, overcoming storms and casting mountains into the sea by means of the authority that Jesus as the exalted Son of Man would share with them. What he does in the boat, as their Lord and master, is model the exercise of that authority.

Related content
Who calmed the storm and why?
Explicit and implicit christologies in Mark
Jesus and the sea: arguments about divine identity
Richard Hays and the God who walks on the sea

I wonder whether it may be valid to see a hint of a connection between the “hear him” of Mk 9:7 and the “heard me”, “always hear me” of Jn 11:41-42. Israel’s god YHWH, who always “hears” the beloved Son (and, per the Lazarus story, always does what the Son asks) , commands His people, Israel, to also hear (and obey) the Son.

(I am also tempted to think that the implications of the Lazarus story, that it was YHWH who raised Lazarus, at Jesus’ [silent] prayer, may imply a similar “behind the scenes ‘mechanics’ ” in other mighty works, such as the calming of the storm of Mk 9.)

Interview: The Preexistence of Christ and Narrative Historical Theology
Answering Mike Bird about the referent of "all things" in 1 Corinthians 8:6
Some hazardous thoughts on the Trinity for a new year and a new era
Why did Jesus instruct his disciples not to preach the kingdom of God to Gentiles and Samaritans?
The throne of Jesus and the throne of God

Answering Mike Bird about the referent of "all things" in 1 Corinthians 8:6
Interview: The Preexistence of Christ and Narrative Historical Theology
How we got from kingdom to Trinity: Constantine and pagan monotheism
Jesus and Paul, works and faith
Some hazardous thoughts on the Trinity for a new year and a new era
Was it Roman custom for people to return to their home town for a census?
A Hindu asks a very good question about the death of Jesus and the salvation of Gentiles
What do the Christmas stories tell us about the pre-existence of Jesus?
END_OF_DOCUMENT_TOKEN_TO_BE_REPLACED